The UNC Asheville divestment campaign started in 2015, which for many was the height of active university fossil fuel divestment campaigns surrounding the energy of the Peoples’ Climate March. The movement started with a passionate and dedicated group of Asheville students citing three major tenets for divestment: that our school’s investments should be in accordance with our mission and student values; universities should benefit communities in the long and short term; and fossil fuel investments carry increasing environmental, social and economic risk. The initial strategy of the campaign was based around many direct-action events and demonstrations in order to gain student support, raise awareness, and pressure the university administration to divest. UNCA Divest also gained significant momentum and support from students and faculty when the Student Government Association passed a resolution towards the end of 2015 that called for divestment.

In 2016, UNCA Divest was able to meet with members of the UNC Asheville Endowment Investment Committee and the Board of Trustees to present the case for divestment. UNCA Divest continued to pressure the administration through direct action events on campus when total support was not forthcoming from the committees. Later on, the initiation of a student-run ESG (Environmental Social Governance) Fund was established under the UNCA Student Environmental Center (SEC), a student-run and student-funded department on campus. $10,000 was allocated to a fund to be managed by a hired student with sustainable and socially responsible criteria as a “test-run” to see what socially responsible investing might look like at UNCA on a larger scale. Since then, the ESG Fund has performed very well and has been managed by four different students under the SEC. This marked an important shift in thinking around what divestment would look like at UNCA by emphasizing the ESG and positive reinvestment strategies, rather than exclusively divestment.

In 2017, the Sustainable Investing Working Group at UNCA was formed to allow for a space to have conversations and collaborations between students, faculty, staff, and administrators to work towards divestment and sustainable investing on campus. It was also around this time that I personally got involved with the campaign as the working group was tasked with drafting, releasing, and evaluating responses to an RFI (Request for Information) and RFP (Request for Proposals). The goal was to gain information about alternative management companies that would have the capacity to manage all or part of the UNCA endowment with ESG (Environmental Social Governance) and SRI (Socially Responsible Investing) principles in some capacity.

The process was very much a learning experience for all UNC Asheville parties involved, and heavily focused on transparency, returns, and experience with higher ed and sustainable investing. The RFI and RFP process was remarkably collaborative within the working group, and students were involved throughout the entire process — a unique scenario that does not commonly occur on other college campuses with student divestment campaigns.

Throughout 2017 and 2018, and this incredibly important and tedious process, UNCA Divest also continued to emphasize student outreach and public demonstrations on campus, to engage students and promote the exciting work that was happening behind the scenes. One of the more noteworthy events was the massive drop of a PVC pipeline drop on the Quad to demonstrate to students and administration that the university should not be perpetuating climate injustices by funding fossil fuel infrastructure with our investments.

Pipeline demonstration on the Quad, 2019

During this time, the Reinvest NC Coalition was also formed in order to foster communication and collaboration between UNC System schools’ divestment campaigns. At this point, there is student activism taking place at UNC Chapel Hill, North Carolina State University, Appalachian State University, UNC Wilmington, Western Carolina University, and UNC Asheville. The goals of the coalition are: the full transparency of the UNC System’s Endowment; fiduciary responsibility of universities by responding to current market trends and environmental obligations; divestment from direct holdings in fossil fuel companies within 1 year; removal of investments from indirect holdings within 5 years; and the reinvestment in Environmental, Social, Government (ESG), low carbon, or fossil fuel free funds that provide environmental responsibility and competitive returns.

After many years of hard work and generations of incredibly dedicated students, the Board of Trustees passed a resolution approving a partial divestment in June 2019, making UNCA the first in the UNC System to take any action to divest from fossil fuels. $5 million (10%) of UNCA’s total $50 million endowment is to be reallocated into a new portfolio with an alternative management company, Walden Asset Management, that will manage the funds with environmentally and socially responsible investing principles (and will not invest in fossil fuel companies), as well as offer complete transparency about the university’s investments. This is anticipated to take effect January 1, 2020. 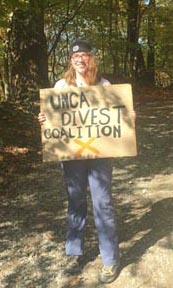 Executing this divestment was previously held up over the summer due to unexpected and unprecedented disputes over “institutional neutrality” from several conservative think-tank groups, essentially trying to argue that UNCA is taking a political stance (which is deemed illegal by this legislation for a university in the UNC System to do) by divesting from fossil fuels. After legal advice and working with the administration, UNC Asheville has determined that since this statement holds no legal backing and the commitment has not received pushback from the Board of Governors that oversees the whole UNC System, it will, therefore, move forward with the partial divestment initiative. This recent twist slowed us down, but we are pushing forward and going strong. The partial divestment resolution is an exciting first step, and we’re gaining exciting momentum, but we aren’t finished yet. In the coming semesters, the campaign is ready to gear up and continue fighting for our long-term goal of full divestment for UNC Asheville and, eventually, divestment for the entire UNC system.

—Kelsey Hall, Rachel Carson Council Fellow, UNCA. Kelsey Hall is an Environmental Policy and Management major at the University of North Carolina-Asheville with minors in Economics and Human Rights Studies.