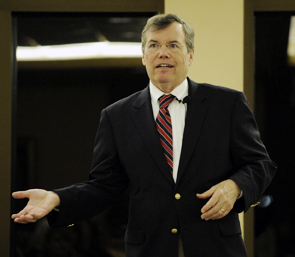 Dr. Musil is also a Senior Fellow and Adjunct Professor at the Center for Congressional and Presidential Studies, School of Public Affairs, American University, where he teaches about climate change and American environmental politics. He also has been a Visiting Scholar at the Churches’ Center for Theology and Public Policy, Wesley Theological Seminary, where he taught about religious responses to global warming and security threats.

From 1992-2006, Dr. Musil was the longest-serving Executive Director and CEO of Physicians for Social Responsibility (PSR), winner of the 1985 Nobel Prize for Peace. During his tenure, he nearly tripled PSR’s membership, budget, and staff. He is a graduate of Yale and Northwestern Universities and the Johns Hopkins School of Public Health and has been a Visiting Honorary Fellow at the London School of Hygiene and Tropical Medicine and of Pembroke College, Cambridge University. Dr. Musil received an honorary Doctor of Humane Letters (LHD) from Mitchell College and joined their Board of Trustees in 2009. In spring 2011, Dr. Musil was also awarded an honorary Doctor of Science (Sc.D.) at Lincoln Memorial University. A Woodrow Wilson Foundation Visiting Fellow since 2006, he is widely sought as a campus and civic lecturer. Dr. Musil has also taught at Northwestern, Temple, St. Joseph’s and LaSalle Universities.

Dr. Musil specializes in contemporary global sustainability, security, and health issues, as well as Cold War history, culture, and policy. He is the author of numerous articles and Hope for a Heated Planet: How Americans are Fighting Global Warming and Building a Better Future (Rutgers University Press, 2009); Rachel Carson and Her Sisters: Extraordinary Women Who Have Shaped America’s Environment (Rutgers Press, 2014) and Washington in Spring: A Nature Journal for a Changing Planet (Bartleby Press, 2016).

A long-time leader of the environmental and nuclear arms control movements, Dr. Musil has also been Executive Director of the Professionals’ Coalition for Nuclear Arms Control, the SANE Education Fund, the Center for National Security Studies Military Affairs Project, and CCCO: An Agency for Military and Draft Counseling. He is a former Army Captain who taught communications and policy at the Defense Information School, Ft. Benjamin Harrison, Indiana.

For fourteen years, Dr. Musil was also the Executive Producer and host of “Consider the Alternatives” a half-hour weekly radio program syndicated to over 150 stations with over 2,000,000 listeners. He has been the producer of numerous ground-breaking independent video documentaries and public radio documentary series including “One Blue Sky: Health and the Human Environment.” Dr. Musil is two-time winner of the Armstrong Award for Excellence in Radio Broadcasting.