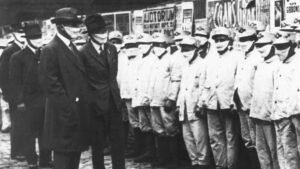 It was President Warren Harding who called for a “return to normalcy,” mangling our language and American history with his extremely popular early use of a sound bite or Tweet. The sentiment is understandable given the years of death and disruption from global war and a global pandemic that preceded his landslide election in 1920.

Similar calls are heard now as President Joe Biden takes office. The longing to return to some idealized “normalcy” is palpable following years of a mismanaged and devastating pandemic, along with the growth of violent white supremacy ignored and then stoked by President Donald Trump. But it is as illusory as Harding’s call that ignored Jim Crow, lynching, widespread disenfranchisement, economic inequality and unrestrained corporate capitalism.

With his defeat, President Trump challenged the legitimacy of Biden’s victory. With his allies in the Republican Party, the president called for storming the U.S. Capitol to “Stop the Steal.” With the Trump-inspired mob causing a joint session of Congress to flee as rioters chanted “Hang Pence!” and “Where’s Pelosi?” the Donald Trump brought on his second impeachment and leaves office with the majority of Americans believing he should be convicted and barred from future office.

Following insurrection, and with the inauguration of Joe Biden and Kamala Harris held in a fortified Capitol surrounded by troops, today’s calls for healing, for returning to normal politics, for putting the Trump years behind us, underestimate the danger to the Republic. Insurrection, challenges to the legitimacy of the President and Congress, and continued exhortations and actions to maintain white supremacy and suppress the votes and endanger the lives and livelihood of African American and other minorities must be dealt with firmly, resolutely and with the full force of the federal government. Right-wing extremists, meeting little resistance had already attacked state capitols before the attack on the Capitol.

President Biden’s campaign slogan to “Build Back Better” and his unifying Inaugural address given amidst 25,000 troops are necessary and appropriate appeals, but they are put forth in what is a new era of Reconstruction. They must be fortified by strong Congressional action and a committed progressive movement. President Abraham Lincoln had to be sneaked into Washington in disguise and surrounded by troops for his first Inauguration in 1861. His resolve to save the Union, embrace the spending and taxes needed to fight the Civil War, and ultimately to oppose slavery, was bolstered by the Radical Republicans (today’s progressive Democrats) in Congress and their leaders like Thaddeus Stevens, Benjamin Wade and Charles Sumner. These leaders were in turn elected by and backed by a broad movement of abolition and anti-slavery citizens and organizations.

In his fine book, Congress at War: How Republican Reformers Fought the Civil War, Defied Lincoln, Ended Slavery and Remade America, Fergus Bordewich says, “it is sometimes popularly supposed that Abraham Lincoln alone led the Union war effort and freed the slaves, as if there were no more to the United States government than the gaunt and lonely man in the White House.”

Those of us and our organizations in the environmental movement need to expand our vision and our actions to include the preservation of the Republic, the expansion of democracy, human rights and voting rights, the elimination of white supremacy, racism, and sexism, an end to militarism, and the creation of economic justice.

Over the past decade, the environmental movement has made progress in working against environmental racism, in revealing the links between corporate greed and investment to the climate crisis, and in connecting its educational and organizing efforts to political engagement. A number of leading organizations, including the National Resources Defense Council, have called for the removal of President Trump from office. But such action is not deeply embedded in the vision, mission and culture of most environmental organizations. It is the exception that proves the rule.

“Normalcy” for many environmentalists is to return to a deep concern about whales, birds, forests, pesticides, polluted drinking water, clean air, and, of course, climate change. When I wrote about why the Rachel Carson Council called for the impeachment and conviction of Donald Trump, a few members responded to me fearing that such a call was divisive, beyond our mission, too political, and, besides, Trump would soon be gone.

Fortunately, RCC supporters responded in great numbers by writing their representatives in Congress to impeach the president. Some sent us additional funds. But even the RCC’s action is not enough for a time of insurrection and the need to recover and rebuild a fractured nation. There has not been a strong, coordinated and unified effort for impeachment and removal among environmental groups, or our sister organizations in the broader progressive community. Given his erratic and seditious behavior, some peace, disarmament, and anti-nuclear groups did call for the removal of Trump since the president has the ability to launch a nuclear war. But these efforts were not joined with environmental groups, nor did most environmental organizations name the danger of a nuclear launch. Environmental groups, with a few exceptions, continue to ignore nuclear weapons and war as threats to the environment and society. The same is true for efforts to protect democracy, create economic, racial and gender equity, and more.

We must include all these in our work, speak and act boldly, create a common front with other progressive organizations, and not shrink from appearing too “political.” I was moved to read of the Catholic priest in suburban Chicago, Father William Corcoran, who called in his homily for the removal of President Trump. Father Corcoran publicly apologized for all the times he failed to speak out about Trump for fear he would alienate his flock. “As President Trump has lied about so many things,” he told the congregation, “I have never spoken out, and fear we are teaching the young that truth and facts do not matter.” Twenty-per cent of his congregants did walk out of the Mass. But the vast majority stayed; many told him how much they appreciated his words.

The victories of President Biden, Vice President Harris and the control of the U.S. Senate were won by speaking out, resisting Trump, and engaging in serious politics. The various progressive forces involved — inspired, sparked and spearheaded by Black anti-racism mobilization — must continue even with Trump out of office. As in the Radical Republican Congress of Lincoln’s time, after insurrection, progressive leaders like Elizabeth Warren, Bernie Sanders, Ed Markey, Alexandria Ocasio-Cortez, Ilhan Omar, Jamie Raskin and more must resist the calls to move on, for moderation, for accommodation to the beliefs and feelings of that part of the public and their representatives who think that we can return to a mythical normal state of affairs or challenge the legitimacy of the elected government altogether.

Environmentalists and progressives of all kinds and out organizations must call for the conviction of impeached former president Donald Trump. We must work and call for an end to racism, sexism, and inequality in our work. We must oppose and resist the forces of white supremacy and insurrection wherever they arise during this our new Reconstruction. We must not fear to be bold. We must not fear to be seen as political. And we must provide the resolve for the new Congress and the new President and Vice President to rebuild and expand opportunity and democracy in the long and continuing history of protecting and building a more perfect Union.