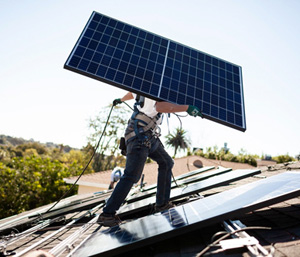 “The future of transportation in our nation and around the world is electric,″ Vice President Kamala Harris said at an EV charging facility in suburban Maryland. Read more

Three Myths About Renewable Energy and the Grid, Debunked 12-09-21

Renewable energy skeptics argue that because of their variability, wind and solar cannot be the foundation of a dependable electricity grid. But the expansion of renewables and new methods of energy management and storage can lead to a grid that is reliable and clean. Read more

Electric utilities are banding together to build a coast-to-coast car-charging network. Read more

More people buy e-bikes than electric cars. Here’s how a bill would make them cheaper. 12-08-21

A tax credit tucked into the Democrats’ Build Back Better Act could incentivize Americans to buy electric bikes. Read more

Airports around the nation are installing solar arrays on unused land, roofs and parking garages, helping them achieve self-sufficiency while also providing power to their communities. Read more

The Wind Beneath Biden’s Wings: Climate Goals Need Wind Energy, Can It Fly? 11-01-21

Without a doubt, the US is about to see a surge in wind energy. Even the Texas panhandle is dotted with turbines. Read more

Tesla will deliver 100,000 EVs to the rental car company by the end of 2022. The U.S.’s second-largest car rental company is betting big on a greener fleet. Read more

The key to shifting away from fossil fuels is for consumers to begin replacing their home appliances, heating systems, and cars with electric versions powered by clean electricity. The challenges are daunting, but the politics will change when the economic benefits are widely felt. Read more

Lead by Texas and the Southeast, the U.S. added a record amount of solar power in 2020. Read more

Why such a heavy focus on solar power? Doesn’t a low-carbon future require many types of clean energy? Read more

One day, ships and buoys could get their energy from the waters themselves. Read more

The clean power industry has argued land lease rates and fees are too high to draw investment and could torpedo the president’s climate change agenda. Read more

In Maricopa County, an electric school bus brings power to the people 08-11-21

One in every nine children in Maricopa County is asthmatic. The Arizona county, home to Phoenix, has some of the most polluted air in the country. Read more

Ford, GM, and Stellantis have vowed that up to 50% of their car sales will be electric by 2030. Read more

The Ford Motor Company has announced that it will be spending more on electric vehicles (EVs) than on internal combustion models in 2023. Read more

Would you support or oppose the government moving the country to a 100% clean energy electricity grid by 2035? Read more

A new report has found that President Biden’s clean energy plan could be one of the most effective climate policies ever passed. Read more

Compared to the pollution generated by fossil fuels, wind energy has the advantage. Read more

The state sees renewables as the best way to prevent blackouts. Read more

Two major American automakers are further ramping up their electric vehicle goals. General Motors plans to increase its spending on electric and autonomous vehicles to $35 billion through 2025, a 30% jump over its most recent forecast. Read more

The more Biden pushes for the United States to lead the electric-car market, the more Republicans push in the opposite direction. Read more

Newsletter: Why a California oil workers union is getting behind clean energy 06-10-21

The dominant narrative about labor unions and climate change is that fossil fuel workers are a major roadblock to action. There’s good reason for that reputation. Read more

President Biden is pushing for electric vehicles as a solution to climate change, and a way to create jobs. One test case for this strategy: Ohio’s Mahoning Valley, near the border of Pennsylvania, which includes Youngstown, Warren and Lordstown. Read more

The federal government plans to open more than 250,000 acres off the California coast to wind development, the Biden administration announced Tuesday, as part of a major effort to ramp up the nation’s renewable energy and cut its climate-warming emissions. Read more

Having fallen a decade behind in developing the renewable energy, the U.S. is priming itself for a space race-style comeback. Read more

Eminent domain opens doors for fossil fuels — could it do the same for renewable energy? 04-27-21

Despite the difficulties associated with the Covid-19 pandemic, the world added a record amount of new renewable energy capacity in 2020, according to data released Monday by the International Renewable Energy Agency. Read more

The U.S. is finally looking to unlock the potential of wave energy 03-29-21

After decades of false starts, the federal approval of a new testing site off the coast of Oregon could give wave energy a much-needed jolt. Read more at Grist

Driven by GM, Tesla, and the Biden administration, the U.S. is now poised to press ahead in the transformation to electric vehicles. Big challenges still loom, but technological advances, government support, and growing consumer appeal will drive the inevitable switch to EVs. Read more at Yale Environment 360

After years of false starts, offshore wind is poised to take off along the East Coast. Commitments by states to purchase renewable power, support from the Biden administration, and billions in new investment are all contributing to the emergence of this fledgling industry. Read more at Yale Environment 360

This is a major step forward in New York City’s commitment to divesting fossil fuels. Read more at EcoWatch

As automakers ramp up EV production, U.S. car buyers are increasingly making the switch themselves. Read more at Grist

In 2018, Vineyard Wind planned to build the first utility-scale offshore wind project near Martha’s Vineyard — a project that could create thousands of jobs and generated enough energy to serve 400,000 households and businesses. Read more at Our Daily Planet

Tap Lines: Maine breweries aim to reduce their impact on the environment 02-01-21

The future looks bright for solar and other renewable energy technology. Read more at The Washington Post

We’re on the cusp of transitioning to electric vehicles—if Biden and Congress take the right steps. Read more at National Geographic

The Pennsylvania Solar Center, a Hill District nonprofit is paying special attention to small- and medium-sized businesses this winter. Read more at the Pittsburgh Post-Gazette