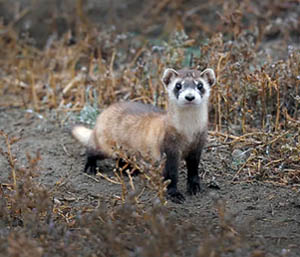 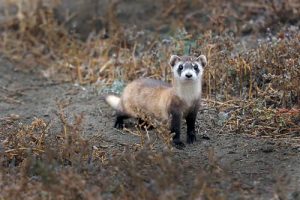 The black-footed ferret, an endangered species, is one of many animals and plants in the US that would benefit from the $1.4 billion Recovering America’s Wildlife Act. Kathryn Scott Osler/Denver Post via Getty Image

The Biden administration is on the cusp of enacting the biggest piece of climate legislation ever, after the Senate passed the Inflation Reduction Act Sunday with a vote straight down party lines. But there’s actually another huge piece of environmental legislation that could soon become law — and it has bipartisan support.

Known by the acronym RAWA, Recovering America’s Wildlife Act would provide close to $1.4 billion a year for restoring wildlife populations across the country. At its core, RAWA addresses a big problem: More than a third of the nation’s plants and animals are threatened with extinction, from the monarch butterfly to the Florida panther, putting outdoor recreation and ecosystems that Americans depend on at risk.

The bill isn’t just some animal-lover’s fantasy: It passed the House in June on a bipartisan vote, and it’s poised to clear the Senate, where it has 16 Republican co-sponsors, as soon as this fall.

Unlike climate-focused legislation, RAWA has a broad base of support, in part because it appeals to hunters and fishers, many of whom tilt conservative. It also gives power to states to decide how to spend the money. Plus, wildlife-related recreation is a $140 billion industry, so protecting plants and animals comes with a strong economic incentive.

To put this bill in perspective: RAWA would be the biggest piece of legislation for wildlife since the Endangered Species Act of 1973, which is credited with saving grizzly bears, gray wolves, and dozens of other beloved American animals from extinction, said Sen. Martin Heinrich, a Democrat from New Mexico.

“It would be a real shame if we didn’t take advantage of this,” said Sen. Heinrich, who introduced the bill to the Senate last summer, along with Republican Sen. Roy Blunt of Missouri.

By funneling money into wildlife conservation, RAWA would protect thousands of plants and animals before they’re at imminent risk of extinction, according to Heinrich and environmental experts. Ultimately, that could save taxpayers money.