Why Care About a Sea Turtle?

The wind whistled in my ears, rippling the sea lapping at the rocks below me. Under the wrinkled surface of the shallows, a green sea turtle swam languidly among the sea grasses. It was a small turtle, no larger than a dinner plate. I leaned against the railing of the sea wall, watching in rapture as the turtle ambled, in movements more peaceful and placid than the ocean, among the underwater meadows. I had walked along the sea wall almost every afternoon during my summer researching at the Duke Marine Lab, fixing my eyes on the water in hopes of spying some sign of a turtle: the flat, glossy back of a shell, a blip in the water’s wavy signature.

The barrier island just across the water from the lab is named the Rachel Carson Reserve in her memory. Wild horses live on the reserve. Photo by Bonnie Gruenberg

When I finally saw the turtle, I stood in stillness as the sea-wind whipped around me. I remembered why I decided to pursue a degree in environmental science and a career in conservation. I chose this path to advocate for threatened species, to restore marine environments degraded by pollution and development. It is a path that led me to the very stretch of North Carolina coast that Rachel Carson wrote about in Under the Sea-Wind.

Of course, today’s ocean is warmer, more acidic, and less rich in wildlife than the one that Carson wrote about. But as I watched the turtle, I remembered Jane Goodall’s wisdom: “there is still a lot left worth fighting for.” And fight I will.

Months later, I returned to the Duke Marine Lab for spring semester classes. One class took me across the world to Singapore and Malaysia. We spent a few days swimming in the vibrant coral reefs around Dayang Island in Malaysia. Submerging myself in the sea, I peered into an entirely different universe, a city of invisible, watery highways, coral high-rises, and fish darting around in an orchestrated chaos of color.

Not all our snorkels were quite so magical, though. One ill-fated trip landed us in the tentacles of a Portuguese man-of-war, whose stings are excruciatingly painful. I peeled one long, electric blue tentacle off my neck. Another wrapped itself around my fingers, and yet another around my ankle. After the man-of-war stings, I was tentative getting back in the water. But I hadn’t seen a sea turtle yet, and I didn’t know when I would have another chance. So, I pulled on my mask and waded into the water. In that section of the reef, much of the coral was collapsed, reduced to rubble. Dynamite fishing, which involves using explosives to stun or kill fish, had destroyed swaths of reef.

I swam on, seeking colorful areas of the reef that still glowed and buzzed with life. I paused in the water, listening to a chorus of clicks from plankton, invertebrates, and moving fish. Suddenly, a shadowy figure emerged––a sea turtle swimming over an outcrop of coral. I watched in awe as it sailed through the water. Rising to take a gulp of air from the surface, the turtle turned its head as if to look at me before swimming into deeper water. I watch its silhouette fade into the ocean depths that drop from turquoise to indigo blue. 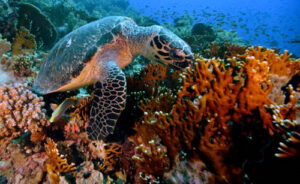 Watching the turtle swim across the degraded reef, I was struck by how much of the natural world, the fate of the ocean and its life, now teeters in our hands. Sea turtles that have evolved over 110 million years and thousand-year-old coral reefs can collapse in mere decades because of human activity. We have lost more than 50% of the world’s coral reefs over the past 30 years and could lose up to 90% within the next century. The outlook for sea turtles isn’t much brighter; six of seven sea turtle species around the globe inhabit U.S. waters, and each of those species is listed as endangered or threatened under the Endangered Species Act

We are all connected to the myriad lives that cycle through the ocean’s salty waters. The ocean moderates our planet’s climate, protects coastlines from storm surges and erosion, and provides habitat for fish that feed billions of people around the world. Sea turtles play a critical role in maintaining those marine habitats. Green sea turtles graze seagrass beds, increasing their nutrient content and productivity. Meanwhile, Hawksbill turtles eat sponges that compete with corals for space. Without hawksbills, sponges can dominate entire reefs. Sea turtles also keep coastlines healthy — their eggs provide scarce nutrients, allowing sand dune vegetation to flourish if sea turtles go extinct — a growing possibility — both marine and dune ecosystems will deteriorate.

The plight of sea turtles forecasts darker forces at play; we are entering the sixth mass extinction in Earth’s history. A 2019 UN report found that one million animal and plant species are now threatened with extinction, more than at any other time in human history. The web of life is collapsing, and with each species lost a thread is torn from the web, leaving a gap behind, a weaker structure.

“In pushing other species to extinction, humanity is busy sawing off the limb on which it perches,” scientist Paul Ehrlich said.

The truth of his assertion haunts me. I think of the few sea turtles that I’ve seen – those transitory encounters were pivotal, motivating events in my life. To think of just one turtle lost is heartbreaking. The loss of hundreds of thousands of species in a sixth extinction is painful, perhaps too painful, to truly reckon with. But we must, for if we can drive so much life to the brink, then we must also have the capacity to bring some of it back, to prevent further loss.

So why care about a sea turtle? Because we must care about something in particular if we are to preserve the diversity of life on this planet. And I think that when we care deeply about just one being, we begin to care about the entire web of life.

Kendall Jefferys is a Rachel Carson Scholar at Duke University and a dual major in Environmental Science and English. She initiated the RCC Coasts and Ocean Program. Ms. Jefferys has been named a Rhodes Scholar for 2021. [email protected]