A Guide to Health, Environmental Justice and Civic Action around Broiler Chicken

For a free copy of the full Fowl Matters report visit our Publications page. 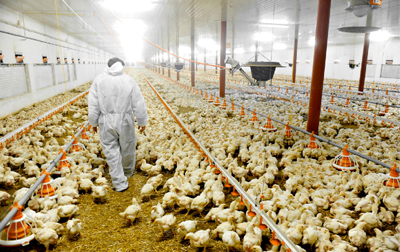 Concentrated Animal Feeding Operations (CAFOs) raise and feed a range of animals in confined situations. Cows, hogs, chickens, turkey and other animals do not graze on pastures. Their manure is heavily concentrated in lagoons or sprayed on crop fields.  The USDA defines broiler CAFOs as annually raising and slaughtering 500,000 or more chickens for meat consumption.

How did Big Ag come about? Modern-day CAFOs were created through a system of subsidies, deregulation, and vertical integration. In 2015, the U.S. produced 9 billion broilers. Today, 97 percent of the chicken we eat is produced by 30,000 farmers under contract with Tyson, Pilgrim’s Pride, Perdue and Sanderson Farms.

Broiler CAFOs are concentrated in what is known as the southeast poultry corridor. Poultry farming is now the number one agricultural operation in North Carolina and in 2014 had an economic impact of $12.8 billion. The green dots below show the spatial distribution of poultry operations in NC. The ongoing expansion of broiler CAFOs translates to more waste, pollution, and adverse health effects for neighbors and consumers. This is partly because environmental regulation of poultry has been almost non-existent over the past several decades.

The Clean Water Act (CWA), passed in 1972, gives the Environmental ProtectionAgency (EPA) the “authority to regulate any entity discharging pollution into national waterways, including CAFOs.” The CWA sets a simple goal of zero discharge into public water and sets limits on industrial and sewage sites. However, it left CAFOs unregulated for years. A recent EPA study shows that nationally, only 36 percent of the largest industrialized livestock facilities and 41 percent of all CAFOs have permits as required by the CWA. Many of the states with the highest densities also have the lowest level of CWA compliance.

Though the Clean Air Act (CAA) has been in effect for 45 years, the EPA has not actively used it to regulate ammonia or any other air pollution from factory farms. Advocates for sustainable broiler production face an additional hurdle because wet chicken litter is regulated by the EPA, but dry litter by the USDA. Attempts to require oversight by both agencies have been repeatedly blocked by the industry, which opposes “safeguards or oversight of factory farm pollutants.” Even when an inspection is required, state-level regulatory bodies are riddled with conflicts of interest and often lack the staff capacity to properly examine all permitted facilities.

Learn about the Community Engagement, Environmental Health and Justice Laboratory at the University of Maryland-College Park. Support the Assateague Coastal Trust, Salisbury NAACP,  and other members of a coalition on the lower Eastern Shore of Maryland.

Poultry CAFOs are breeding grounds for antibiotic resistance, which develops when drugs are used for non-therapeutic purposes. When consumers buy contaminated food at grocery stores, pathways of exposure multiply and can decrease the drugs’ effectiveness for all human patients.

Throughout their short lives, the vast majority of conventionally raised broiler chickens have no access to the outdoors and less than one square foot to move around. They are engineered to grow so quickly that their bodies cannot support their weight.

Sign up for the ASPCA’s Shop With Your Heart initiative which encourages consumers to buy animal-welfare certified products.

To successfully bring about social, environmental, economic, and political change, it is essential to equip coalitions in higher education with research and advocacy skills, and for them to act without fear of repercussions.

Environmental Justice: The North Carolina Environmental Justice Network defines EJ as “The right to a safe, healthy, productive, and sustainable environment for all, where ‘environment’ is considered in its totality to include the ecological (biological), physical (natural and built), social, political, aesthetic, and economic environments. Environmental justice refers to the conditions in which such a right can be freely exercised, whereby individual and group identities, needs, and dignities are preserved, fulfilled, and respected in a way that provides for self- actualization and personal and community empowerment. This term acknowledges environmental “injustice” as the past and present state of affairs and expresses the socio-political objectives needed to address them.“5