A Guide to Health, Environmental Justice and Civic Action around Industrial Hog Operations

For a free copy of the full Pork and Pollution report visit our Publications page. 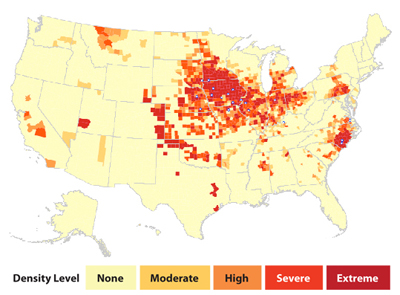 According to the EPA, CAFOs are industrial operations “where animals [cattle, dairy cows, swine, chickens] are kept and raised in confined situations. They generally congregate animals, feed, manure, dead animals, and production operations on a small land area. Feed is brought to the animals rather than the animals grazing or otherwise seeking feed in pastures.” 1

CAFOs were created through a system of agricultural subsidies, deregulated manure management, and the concentration of the industry in the hands of a few at the expense of many.

A large CAFO with 800,000 pigs may yield over 1.6 million tons of waste per year, 1.5 times the amount of sanitary waste produced in the city of Philadelphia, Pennsylvania.2 Unlike human waste, the fecal matter is not treated, and instead ends up in football field-sized pits or is sprayed on crops, polluting water, soil, air, and human health. 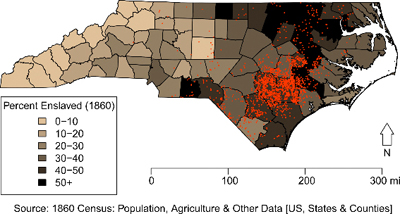 North Carolina has the highest density of hog factory farms in the U.S.

95% of NC hog CAFOs are located in low-income communities of color in the eastern part of the state, making it an environmental justice issue.

Hog CAFOs emit hydrogen sulfide, a toxic gas that causes vomiting and other side effects, as well as ammonia, which can convert to acid rain. Children near CAFOs may experience more asthmatic symptoms. Factory farms are not regulated under the Clean Air Act.

Learn about the Community Engagement, Environmental Health and Justice Laboratory at the University of Maryland-College Park.

Nontherapeutic use of antibiotics— for promoting growth and preventing disease in animals—can lead to antibiotic resistance, undermining the treatment of human infection.

Contract growers are required to spend vast sums to convert their farms into large operations. They often enter debt cycles and become economically dependent on the integrators. Workers face job insecurity, few breaks, and exposure to disease and extreme heat.

Support the efforts and recommendations of the Iowa Farmer’s Union, concerning the rights of contract growers.

Warming Temperatures: The worldwide slaughtering of animals accounts for 18-51 percent of greenhouse gas emissions, in the form of carbon dioxide, methane, and nitrous oxide. A rise in extremely hot days (above 95 degrees) will continue to affect the health of workers.

Hurricanes and Extreme Weather: After Hurricane Floyd in 1999, pig feces overflowed from lagoons, ran off spray fields into watersheds, and cloaked trees in toxic waste. Over the next few years, category four and five hurricanes are predicted to strike NC every 2 years.

Environmental Justice: The North Carolina Environmental Justice Network defines EJ as “The right to a safe, healthy, productive, and sustainable environment for all, where ‘environment’ is considered in its totality to include the ecological (biological), physical (natural and built), social, political, aesthetic, and economic environments. Environmental justice refers to the conditions in which such a right can be freely exercised, whereby individual and group identities, needs, and dignities are preserved, fulfilled, and respected in a way that provides for self- actualization and personal and community empowerment. This term acknowledges environmental “injustice” as the past and present state of affairs and expresses the socio-political objectives needed to address them.“5