Rachel Carson Council President & CEO, Dr. Robert K. Musil, was in residence during the first week of October as a Woodrow Wilson Visiting Fellow at Mount Holyoke College in South Hadley, Massachusetts. Founded in 1837 as the Mount Holyoke Female Seminary by educational pioneer, Mary Lyons, Mount Holyoke is the oldest continuing women’s college in the United States. It has produced generations of leaders inspired by Lyon’s philosophy — “Go where no one else will go, do what no one else will do.”

Dr. Musil’s visit was sponsored by Mount Holyoke’s Miller Worley Center for the Environment and by the Weissman Center for Leadership. During his stay, Musil gave two public lectures, taught a number of classes, including environmental and public health, environmental justice, and a first-year seminar on how wars begin and end. Musil also visited Mount Holyoke’s sustainability sites, and toured the campus restoration ecology site, botanical garden, and historic conservatory greenhouse. 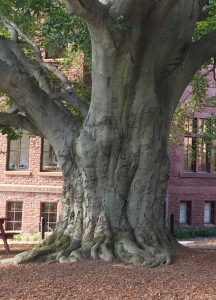 Mount Holyoke is also proud of its status as a campus arboretum with well-labeled and carefully maintained old trees, including a campus centerpiece and symbol, the “million-dollar tree” — a monumental copper beech planted over a century ago. It has been protected from removal over the years by students, faculty, and alumnae. Mount Holyoke is also committed to reducing its carbon footprint through green building construction, including retrofitting of many of its historic buildings, restoring wetlands, natural ecosystems, and eliminating waste.

In his first lecture, “Is Anybody Listening? Lessons from a Life in Advocacy,” where he was introduced by Becky Wai-Ling Packard, Director of the Weissman Center, Musil described his own journey from Vietnam anti-war activist to head of today’s Rachel Carson Council (RCC). The RCC is protesting and lobbying against the Atlantic Coast Pipeline planned to carry fracked natural gas from Maryland to North Carolina, organizing against the spread and environmental and human health harms of industrial animal production, and promoting clean energy and sustainable farming.

In his main campus-wide lecture, “The Legacy of Rachel Carson: Empathy and Environmental Justice,” Musil was introduced by Catherine Corson, Director of the Miller Worley Center. He linked Rachel Carson to three prominent Mount Holyoke alumnae — Emily Dickinson, Cornelia Clapp, and Frances Perkins. They combine Carson’s traits, Musil said, of imagination and empathy, love and scientific study of the natural world, and a passion for social justice and policy change. Musil said his own interests could be traced to his mother, grandfather, and great-great grandmother, Catherine Pomeroy Kirkland, who attended Mount Holyoke Female Seminary in 1846 around the time of Emily Dickinson. He stressed the importance of imagining people and places you have never seen and entering into their very different experiences through literature and the arts.

Rachel Carson, in fact, developed her love for the sea — leading to three best-selling books about the ocean — before having ever seen it. Carson attributed her early longing for the sea to the poetry of Alfred Lord Tennyson, John Masefield, and other writers. In that way, Musil said, she is like Emily Dickinson, who wrote, “I never saw a moor. I never saw the sea. Yet know I how the heather looks and what a wave must be.” In childhood, Carson also considered animals — birds, bunnies, and others — to be her “friends.” Her first ocean book, Under the Sea Wind, traces the lives of three main “characters” — Rynchops, the Black Skimmer; Scomber, the mackerel; and Anguilla, the eel. This mild anthropomorphism allows us to feel for the struggles of other species to live and to survive, Musil said. Such an ability to understand and feel empathy for the “other,” whether human or animal, is central to Carson’s ethic and environmental action. But, such feeling needs to be grounded in scientific accuracy, Musil explained, alluding to Mount Holyoke’s pioneering marine biologist, Mount Holyoke professor and Woods Hole Biological Laboratory Trustee, Cornelia Clapp. Clapp earned both the first and the second Ph.D.s ever awarded to an American woman and taught and lived by the experiential dictum first proclaimed by Louis Agassiz, “study nature, not books!” But science alone, and literature alone, are not enough, Musil stated, comparing Rachel Carson’s concern for civil rights and social justice to that of Holyoke alumnae Mary Wooley and Frances Perkins. Wooley was President of Mount Holyoke in the early twentieth century and a noted disarmament, suffrage, and civil liberties leader. Wooley was also an original signer of the 1900 document “Call for the Lincoln Emancipation Conference to Discuss Means for Securing Political and Civil Equality for the Negro”, which created the National Association for the Advancement of Colored People (NAACP). Perkins, Secretary of Labor for FDR and the first female cabinet member, instituted numerous New Deal reforms and was part of an influential group of women who came together and helped plan the successful launch in Washington of Rachel Carson’s Silent Spring. Carson herself worked for two prominent biologists at Johns Hopkins who renounced the prevailing racist eugenics theories and joined the NAACP. Later, Carson’s literary agent, close friend and confidante, Marie Rodell, launched Martin Luther King, Jr.’s first book, Stride Toward Freedom.

A passion for service and social justice off campus still marks the modern Mount Holyoke with truly diverse undergraduates and a strong Community Based Learning (CBL) program that works with agencies in nearby Holyoke, Massachusetts. Musil toured agencies in Holyoke, a formerly prosperous small city, with Alan Bloomgarden, Mount Holyoke’s Director of CBL. Mount Holyoke students work at places like Nuestras Raices (Our Roots), a non-profit farm and distribution network of organic and healthy food amidst a food desert in the low-income, predominately Puerto Rican community of Holyoke.

Musil also met frequently with students, faculty, and groups, including a final dinner with a group of outstanding and diverse Mount Holyoke women who are environmental, social justice, and student government leaders. Each shared their very moving life stories and aspirations, the work that they are doing, and their eagerness to become leaders like Carson, Clapp, Wooley, and Perkins.

During Dr. Musil’s stay, over 100 students and faculty joined the Rachel Carson Campus Network (RCCN), as Mount Holyoke became the 42nd college to join the RCCN.