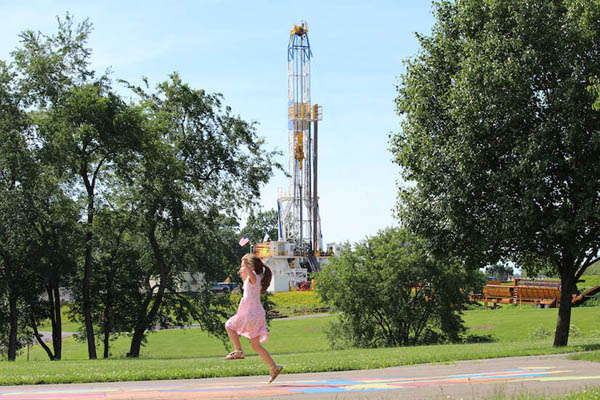 Washington County in southwest Pennsylvania is the center of the fracking industry and the subject of the 2018 Pulitzer Prize-winning book, Amity and Prosperity: One Family and the Fracturing of America by Eliza Griswold. 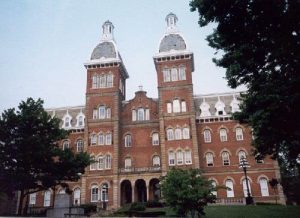 It is also the home in Washington, Pennsylvania of Washington & Jefferson College that was attended in the nineteenth-century by Rachel Carson’s mother, Maria McLean Carson, and her grandfather, Rev. Daniel M.B. McLean, a learned Presbyterian minister. According to RCC President & CEO, Dr. Robert K. Musil, the college is, in effect, the birthplace of Rachel Carson’s environmental ethic.

Dr. Musil made his remark in October while lecturing at Washington & Jefferson where he also taught classes in biology and environmental science and met with faculty and student leaders of the college environmental club. Musil was invited to Washington & Jefferson by President John Knapp, whom he met in June at an international conference on threats to democracy and higher education at the Council of Europe in Strasbourg, France. On campus, Musil was hosted by Dr. Robert East, Director of the W&J Environmental Studies Program.

Washington County, Musil explained in his lecture, is also at the center of the current national debate, in light of the climate crisis, on whether the United States will move to a future of renewable energy, free from fossil fuels and nuclear power. Pennsylvania was critical to the 2016 electoral victory of President Donald Trump, who carried the state by a mere 44,000 votes, riding promises to restore coal production, increase oil drilling, and ramp up the output of fracked natural gas. Washington County has been dependent on such fossil fuel production and is also the home of Canonsburg, the “most radioactive city” in the United States. As the adverse environmental and health effects of fracking have been increasingly well documented by groups like the Southwest Pennsylvania Environmental Health Project while the costs of renewable energy have become competitive, opposition to fracking in Washington County, Musil stated, has grown. The history of radium and uranium production in nearby Canonsburg, where Jefferson College was located, also shows the futility of looking to nuclear power as a clean, safe, and renewable source of energy for the future. 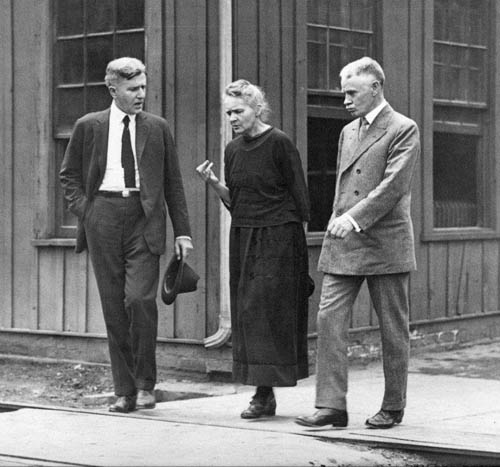 Canonsburg produced almost all the world’s radium, discovered by the first woman Nobel Prize-winning scientist, Madame Marie Curie. Radium was used commercially to produce, among other products, watch dials that glowed in the dark. Only later was it revealed that the radium-laden, radioactive paint applied to the watch dials by factory women in New Jersey caused disfigurement and cancer, as documented in Kate Moore’s best-selling book (also made into a play and film), Radium Girls: The Dark Story of America’s Shining Women. But, as Musil explained, conditions were as bad in Canonsburg where the radium was produced. Madame Curie herself visited Canonsburg and the Standard Chemical Company in 1921. But Curie, like many of the workers in Canonsburg, died in 1934 of radium exposure. Canonsburg then became a part of the Manhattan Project that built the first two atomic bombs, processing uranium ore from 1942-1957, becoming known as the radioactive city. Only later was Canonsburg included in Federal legislation to clean up its radioactive sites, some of which remain fenced off, restricted and radioactive to this day.

For students and faculty at Washington & Jefferson, Musil told his audience, the environmental ethic of Rachel Carson offers a guide to education, organizing and advocacy, along with civic engagement in elections, that can move Washington County, Pennsylvania, and the United States away from antiquated and dangerous nineteenth and twentieth century industries, pollution, radiation, health problems, and climate change, toward a future of clean, renewable energy. 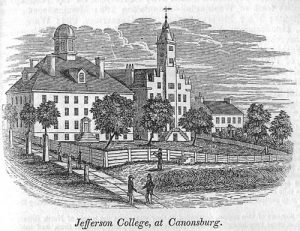 Rachel Carson’s values, that undergird the work of the Rachel Carson Council, came directly from her family, including her grandfather, Rev. Daniel McLean, who graduated from Jefferson College in Canonsburg, Pennsylvania in 1859. (Jefferson merged with Washington College in 1865). Rev. McLean passed on a strong sense of concern for others, social responsibility, and love of learning to his daughter, Maria McLean. Maria graduated in 1887 at the top of her class at the Washington Female Seminary, an elite women’s preparatory school adjacent to Washington College on the current campus of Washington and Jefferson. It occupied McIlvaine Hall (now occupied by the Swanson Science Center) and was founded by abolitionists and run by pro-suffrage female heads. 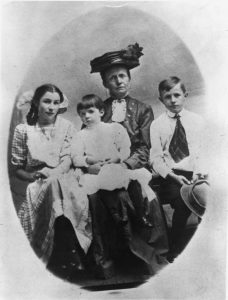 Maria Carson with her three children, Marian, Rachel (about 3) and Robert

The brilliant Maria McLean (Carson) was permitted to take courses at the men’s college and became a teacher upon graduation. But when she married, as was required at the time, she had to give up her teaching position. She poured her learning, love of nature, writing, and progressive values into her youngest and favorite child, Rachel. Rachel was raised on the curriculum used by her mother from the “Nature Study Movement” and the Handbook of Nature Study by Anna Botsford Comstock. It promoted outdoors, experiential learning to create a love of nature and science, of other creatures (Rachel said “animals are my friends’) and a gentle, non-violent character that would not “murder” creatures that a child had learned to love. Rachel won childhood literary prizes, attended the Pennsylvania College for Women in Pittsburgh (now Chatham University) as an English major, switched to science, and went on to the Johns Hopkins Graduate School to become a marine biologist.

Unable to finish her Ph.D. for lack of funds during the Depression, Carson began work at the federal Bureau of Fisheries (later the US Fish and Wildlife Service, USFWS) and wrote her first book, Under the Sea-Wind in 1941. It, and Carson’s other best-selling ocean books (The Sea Around Us and The Edge of the Sea) capture the essence of Rachel Carson’s ethic which includes scrupulous science, a respect for all living creatures, a sense of wonder, awe and imagination that feels for the natural world, and a commitment to action. Through her work at the USFWS and deep connection to other scientists and environmental groups, Carson learned and wrote about the dangers of nuclear weapons and waste, the horrors of animal factory farms, the earliest warnings about global climate change, and, of course, the dangers of pesticides to animals and humans laid out in her best-known work, Silent Spring.

RCC President Musil then told his audience in Dieter-Porter Hall that Rachel Carson’s ethic and her sense of environmental justice inform the vision and the values of today’s Rachel Carson Council. The RCC was founded in 1965 by Carson’s closest friends and colleagues whom she asked to form an organization to carry on her work as she was dying from breast cancer. Musil also pointed out that contrary to the “myth” of Rachel Carson, she was not a sole genius who wrote one book on pesticides that caught the attention of the Kennedy Administration and changed the world. She was, instead, deeply engaged in policy and politics with a broad range of colleagues and organizations, who not only did first-rate science, wrote, educated and organized widely, but also lobbied, wrote legislation, and worked to elect pro-environment policy makers.

Musil concluded by telling his audience of faculty and students that their civic and political engagement was essential to finally ending the fossil fuel age and ushering in a new one. He urged them to join with the RCC and other environmental and justice organizations, to apply for the RCCs new campus Fellows program, to come to the RCC’s Capitol Hill Days in Washington, DC, and most of all, to engage in the 2020 elections in order to create a government in the Congress and the White House, committed to combatting global climate change, protecting the environment, and building a just and green economy. After his lecture, Musil signed copies of his books, Rachel Carson and Her Sisters: Extraordinary Women Who Shaped America’s Environment and Washington in Spring: A Nature Journal for a Changing Capital and welcomed Washington & Jefferson College as the fifty-fourth college in the Rachel Carson Campus Network.