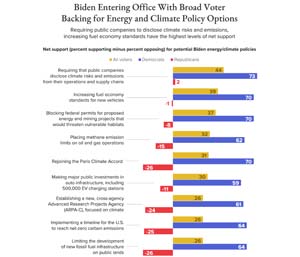 As a candidate, Joe Biden made climate action a central part of his campaign, and it is consequently no surprise that the swaths of Democrats who voted him into the White House supported such action. But does the partisan backing for his campaign pitches translate into broader support for the policy options confronting a President Biden upon his inauguration?

A new Morning Consult poll finds that indeed it does. Faced with a list of nine policy options that a Biden administration could take on the environment, at least half of registered voters were in support of all of them.

The most popular of these — requiring that public companies disclose climate risks and the greenhouse gas emissions from their operations and supply chains — garnered support from 63 percent of voters. Meanwhile, the least popular — establishing a new, cross-agency Advanced Research Projects Agency (ARPA-C), focused on climate — had the backing of 51 percent of the electorate, and 24 percent reported that they didn’t know or had no opinion on the somewhat wonky proposal. For all options, opposition hovered around a quarter of respondents.