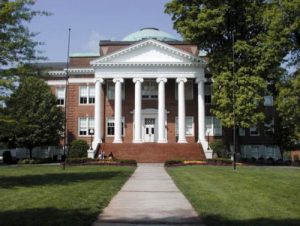 The University of Lynchburg, located in central Virginia, is among the top 20 Southern universities ranked by the U.S. News and World Report. Dr. Laura Henry-Stone, Assistant Professor of Environmental Studies, invited the Rachel Carson Council’s Associate Director and Campus Coordinator, Mackay Pierce, to Lynchburg to speak with her students about their important roles in the climate movement and to learn about some of the fascinating projects they are doing to engage in sustainability.

Pierce spoke to classes and met with students about the challenges their generation face in tackling the climate crisis. Pierce’s visit to Lynchburg came among a spate of college visits on behalf of RCC. While talking to students about ways they can engage on their campus, Pierce also recruited for the RCC Fellowship Program, a competitive national program designed to identify student environmental leaders and support them in campaigns for sustainability on their campuses and in their communities. Pierce also identified and urged students and faculty to sign up as activists for the RCC and participate in the upcoming RCC Capitol Hill Days, a national advocacy event being held in March. 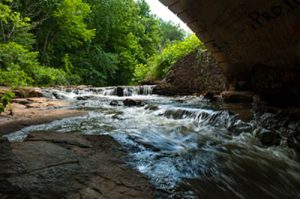 Mr. Pierce also toured College Lake, where the school’s environmental students are encountering a sustainability problem in their own backyard. College Lake had been plagued in recent years by flooding and a failing dam. A 25-acre reservoir located on campus, College Lake lies in a critical position within the Blackwater Creek watershed, capturing surface waters from multiple sources just before emptying into the James River. College Lake’s ecosystem had degraded rapidly as it filled with sediment, nutrients, and raw sewage, resulting in the rapid development of watershed and stormwater management problems. As a result, hastened by flooding in 2018, the university and the city of Lynchburg decided to drain the lake, remove the dam and transition the lake into a new wetland ecosystem. This represents an exciting opportunity for students to learn about sustainability challenges in the real world and to decide how best to transition their soon to be lakebed into an urban wetland.

As our nation and world begin to tackle ever more complex challenges in sustainability, it’s heartening to know that our future environmental leaders are getting the opportunity to confront them directly on their campuses today. After Mackay Pierce’s visit to the University of Lynchburg, it became the 56th college to join the Rachel Carson Council Campus Network.