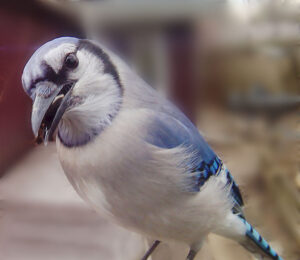 In some Native American legends, the Blue Jay was a revered trickster who worked with foxes and coyotes. But because of their loud vocalizations, others have thought of Blue Jays as gossips, looked upon as noisy, arrogant, and selfish birds. Their flashy plumage seemed prideful as well. But either way, Blue Jays have entered the modern imagination and continue to fascinate us.

Many common American expressions take their origin from Blue Jays. “Naked as a jaybird” which makes little sense. Of course Blue Jays don’t wear clothes, but what bird does? Then there’s “Crazy as a jaybird” which makes a little more sense given their raucous behavior and loud calls. Referring to a foolish or talkative person as a chattering jay probably originated from their scientific name which means “blue chatterer.” 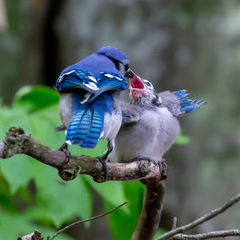 I admire the Blue Jay for its intelligence, strong family bonds, and for often taking on the role of sentry. Their loud “beep beep” is a warning call to others in the area that danger is near such as a hawk on the hunt, or even a human threat.

A native of eastern and central North America, the Blue Jay is common in residential areas and a regular visitor in my yard. Their beautiful, complex coloring adds to their flashy reputation. A curious fact is that although we see their feathers as bright blue, this is an illusion (or maybe a trick…) The Blue Jay’s coloration is not derived from pigments but is the result of light interference due to the internal structure of the feathers. We perceive their feathers as blue, but they are actually black. When sunlight strikes a Blue Jay feather, the beam passes through the barb’s transparent outer layer to the air-filled cavities that scatter the blue light and absorb the longer red wavelengths. The blue we perceive is actually enhanced in intensity by the underlying melanin-rich black layer. 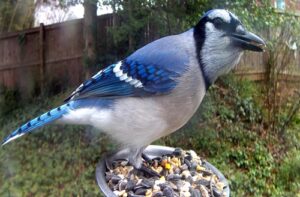 Not only is the Blue Jay a visual trickster but a vocal one as well. They can mimic local hawks so spot on that it’s difficult to tell who’s who. Like other corvids, Blue Jays are capable of making a variety of sounds. Individuals may even vary in their calling styles. They will also use their prominent crest to indicate their mood. When acting aggressively they will raise the crest. When frightened, the crest will bristle out like a brush. When feeding or resting among other jays, the crest stays flattened on the head. 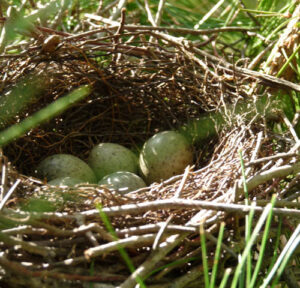 Although Blue Jays are noisy, bold, and aggressive birds, they can also be beneficial to other bird species. You will often see them chasing predatory birds such as owls and hawks or letting out a scream when they spot a predator in their territory. Smaller birds recognize this call and hide accordingly. When defending their realm, jays will band together to mob predators and drive them away from their nesting area.

The message is clear. Don’t mess with the Blue Jay mob!

This same territorial instinct is on display at bird feeders where they will chase others from a feeder for an easier meal. As members of the corvid family, which includes crows and ravens, Blue Jays are highly curious and young tricksters will snatch up brightly colored or reflective objects and carry them around until they get bored. 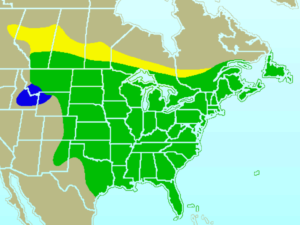 Some Blue Jays migrate, especially younger ones, although to this date no one has definitively figured out why they migrate when they do. Much about their migratory habits remains a mystery. Those that don’t migrate have expertly adapted to humans and live in parks and residential areas in addition to forests and mixed woodlands across the North American continent. 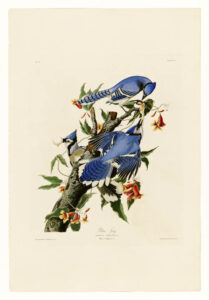 First described by English naturalist Mark Catesby in his 1731 publication of Natural History of Carolina, Florida and the Bahamas. Blue Jays are credited with spreading acorns across the continent through their practice of hoarding thereby creating vast oak forests after the last glaciers receded. They can carry more than one acorn at a time and this trick is accomplished with an expandable throat that acts like a grocery bag. They are also clever enough to tell which acorns are good or not. Blue Jays, like squirrels, have an awesome memory for where they’ve cached acorns. But they still miss a lot and so inadvertently plant large numbers of oak trees. So the next time you enjoy the sight or shade of a mighty oak, thank the winged trickster, the Blue Jay!

Ross A. Feldner, RCC Board Member

Ross Feldner is the lead, with Bob Musil, of the RCC Bird Watch and Wonder Program. Ross is a life-long birder and photographer who is the editor of the Friends of Patuxent National Wildlife Refuge newsletter. Ross also serves as a guide at the Patuxent National Wildlife Refuge, a frequent birding spot for Rachel Carson who first learned about the health effects of DDT at the laboratory there. He is also the owner/art director of New Age Graphics, a full-service graphic design firm in Wheaton, MD.