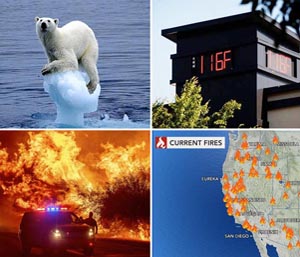 The Summer From Hell

In the nineties, when it was novel, I used to run around shouting about climate change, “It’s not just polar bears and penguins, it’s people, too!” Editors are still enamored of photos of “iconic” polar bears struggling with melting ice. Thirty years later, we have a climate crisis, but it is often reported as extreme weather, either flooding, or record temperatures and fires that allow for photos and fancy maps. In this climate summer from hell, where temperatures have reached 116º F in Oregon and worse in already hot, arid areas, it is hard to know that our most iconic species, the human being, is suffering.

Scientists and environmentalists have been warning the public and policy makers about the adverse effects of climate change on people for decades, but it is hard to break into news cycles that depend on controversy, action, film, and photos. Even after more than 800 human deaths this summer have been attributed to extreme heat from climate change, (and still the count is rising), it remains hard to find a photo of anybody dying or suffering in the heat. 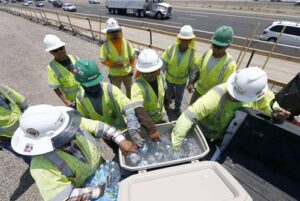 But that may be changing as the summer from hell does more than burn forests, destroy homes, and ruin air quality. A huge swath of American workers across sectors and political lines is being directly scorched, including Latino farmworkers in California and the West, African Americans and others in low-paying jobs in warehouses and steaming unregulated workplaces, and construction workers of all kinds across the country. In fact, the heat not only kills, it causes additional workplace injuries as American workers struggle with high temperatures.

But there is no escape from the heat for those who produce, pick, and ship our food, pack up an endless stream of consumer goods delivered by Amazon at the click of a mouse to air-conditioned homes and offices, assemble our new fuel-efficient cars, repair our highways and our houses, or slaughter and chop up the chicken, pork, and beef for our shaded or beach side picnics.

The response from officials so far to the inferno of 2021 has been mixed and led by states and localities since there is no Federal mandate to deal with heat exposure. The Biden Administration, which has declared climate change an existential threat, has begun to take steps to address extreme heat stress, but must do so with the tools available immediately and in the face of Republican (and some Democratic) opposition to regulations and policies that affect the fossil fuel industry and help workers. There are no Federal workplace rules about heat and only now has OSHA put heat regulations for the workplace on its agenda to be considered by Biden.

The take home message for the public and especially the Biden Administration from this summer of hell? The extreme climate effects warned about for decades by scientists and environmentalists, especially those that affect the health and well-being of Americans, are not in the future. They are here now. And they will get worse if no action is taken. And that action must be big, bold, worthy of a climate emergency, not just a “threat.” Environmentalists and progressives have proved prescient before. Now they are urging the president to declare a national climate emergency that would allow him wider powers to act more boldly. Rep. Earl Blumenauer (D-OR), Rep. Alexandria Ocasio-Cortez (D-NY) and Sen. Bernie Sanders (D-VT) have even introduced legislation to that effect. Mr. Biden should take them up on it. His opponents will criticize him as a socialist and big spender no matter what he does, or how he compromises. But this is not the searing season to let Mitch McConnell or Joe Manchin, or the oil, gas, and coal industries, decide the fate of Americans in the face of deadly climate danger. Just say “to hell with ‘em.”