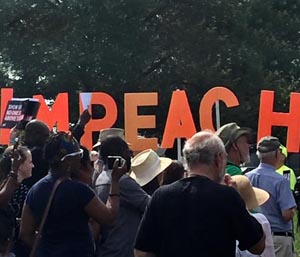 The Environment and Impeachment? 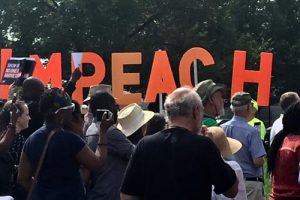 As soon as Speaker of the U.S. House of Representatives, Nancy Pelosi  announced the initiation of an impeachment inquiry into the actions of President Donald Trump, the Rachel Carson Council (RCC) signed on in support of a pro-impeachment rally on September 26, 2019 on the grounds of the United States Capitol.

The RCC has been critical of the Trump Administration’s unceasing efforts to roll back, ignore, or weaken environmental policies and regulations and to favor the drilling, digging, blasting, burning, and infrastructure building of the fossil fuel industry. Ditto President Trump’s failure to address the climate crisis. Such opposition to Presidential actions are simply efforts to protect the environment, right? But publicly supporting the impeachment of President Trump? Isn’t that political, partisan, and plainly outside the purview of an environmental organization?

Not if you see environmental protection deeply grounded not only in public education, but also in unfettered scientific inquiry, the rule of law, and a functioning democracy where citizens have equal rights and the ability under the First Amendment to petition the government for a “redress of grievances,” including petitions, demonstrations, lobbying, lawsuits, and fair and free elections. Autocratic governments, where citizens have little or no ability to influence public policy, are often among the worst polluters. When the Iron Curtain was lifted after the Cold War, what was discovered were gravely degraded environments caused by the unchecked production of chemicals, fossil fuels, and nuclear weapons, along with rampant mining, huge industrial sites, and more that destroyed entire landscapes and harmed human health from Siberia to Silesia. 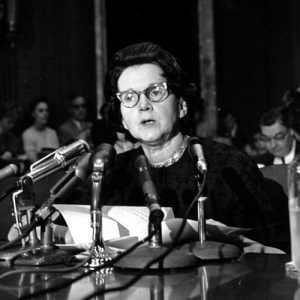 Activist and author Rachel Carson, whose book “Silent Spring” led to a study of pesticides, testifies before a Senate Government Operations Subcommittee in Washington, D.C. on June 4, 1963. Carson urged Congress to curb the sale of chemical pesticides and aerial spraying. (AP Photo)

Rachel Carson, the progenitor of much of modern American environmentalism, understood well its grounding in public policy and the rule of law. She not only testified before Congress and worked closely on legislation with JFK’s Secretary of the Interior, Stewart Udall, she also was keenly aware of the importance of the Constitution as a bulwark of citizens’ ability to protect the environment.“If the Bill of Rights contains no guarantee that a citizen shall be secure against lethal poisons distributed either by private individuals or by public officials, it is surely only because our forefathers, despite their considerable wisdom and foresight, could conceive of no such problem.”

Carson similarly understood the dangers of Executive power used to support production and profit over people and the planet. Before there was an EPA, she wrote scathingly of the Eisenhower Administration’s installation of the anti-environmental Oregon businessman, Douglas McKay, as Secretary of the Interior. McKay then promptly fired the conservationist head of the US Fish and Wildlife Service, Albert Day, along with Marion Clawson, head of the Bureau of Land Management. “These actions,” Carson fumed in the Washington Post, “…fall into place beside the proposed giveaway of our offshore oil reserves and the threatened invasion of national parks, forests and other public lands.” Speaking of the long, hard-won gains by citizens for the protection of the nation’s natural resources, Carson added presciently, “Apparently their hard-won progress is to be wiped out, as a politically minded Administration returns us to the dark ages of unrestrained exploitation and destruction.”

President Dwight Eisenhower did not commit impeachable offenses as his Administration moved to roll back environmental protections. And so, Carson and other conservationists turned to the election of John F. Kennedy and a new Congress to get a wave of environmental initiatives. Today, many Americans might say that the electoral process is the proper remedy for the steady assaults of the Trump Administration on the planet and public health.

But when the latest revelations about President Trump show him essentially blackmailing a foreign power to investigate a political opponent running for president, a stark pattern of abuse of power is brought back into high relief – a failure to respond to or provide information to Congressional investigations, the misappropriation of funds without budgetary authority to build a Mexican border wall, the encouragement of bullying and violence at political rallies, documented attempts to obstruct justice, and much more means that the most fundamental principles of American democracy that undergird environmental protection have been jettisoned as if they were coal ash or hog wastes.

The Rachel Carson Council and other environmental organizations have already realized the need to advocate for  and protect the rights of people of color and poor communities who suffer disproportionately from pollution and climate change. Voter suppression, the refusal to extend the Voting Rights Act, gerrymandering, and more have already deprived many African Americans and others of civil and environmental protections. It is why we work against environmental injustice and racism at the state level, as in North Carolina, and at the Federal level. To fully protect the environment and human health, environmental organizations must and already have waded into the waters of civil and human rights. 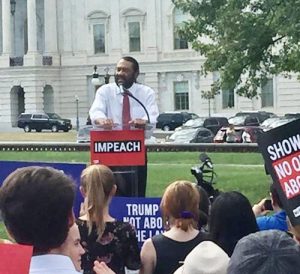 It is why the crowd at the impeachment rally on September 26 stood under the dome of the United States Capitol and directly across from the Supreme Court,  potent symbols of democracy and law. Main speakers like U.S. Representative Al Green (D-TX), one of the first members of Congress to urge the impeachment of President Trump over two years ago, invoked civil rights icons Rosa Parks and Dr. Martin Luther King. Parks and King, Rep. Green intoned, were motivated not by polls or partisan politics, but by deep principles, including the Constitution and equal rights for all citizens.

So long as respect for the Constitution, for the co-equal role of the Congress, and the need for the Executive branch to faithfully execute the laws of the land are ignored by President Trump, there is no serious hope in the short term for improving our environment, mitigating climate change, or building a vibrant new green economy. The environmental movement and organizations representing it can only function in a true, uncompromised democracy that recognizes the rule of law and the rights of its citizens to seek a redress of grievances. In our time, that means advocating not only for the environment, but the functioning of a Constitutional republic. And that means that any President who violates his or her oath of office and commits “high crimes and misdemeanors,” must be impeached.