On July 15, 2019 environmentalists and community members from across the state of North Carolina and visitors from Virginia and the United Kingdom showed up and gave public testimony against the proposed expansion of Enviva Sampson, an industrial wood pellet producer. Their words spoke truth to power, and the message was clear – North Carolinians want an end to the wood pellet industry in their state. 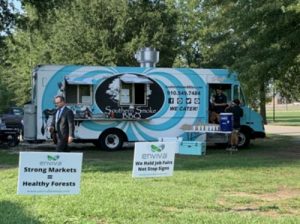 Enviva’s signs and the food truck it sponsored directly in front of the entrance to the public hearing.

Unfortunately, the solution isn’t so simple. As detailed in our 2019 report, Clear Cut, Enviva has entrenched itself in North Carolina. It is a part of a system which harms the environment, perpetuates injustices against frontline groups, and divides communities under the guise of economic development. 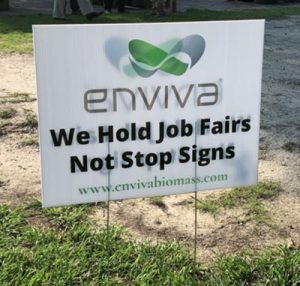 Upon arriving at the hearing location, Enviva’s divisiveness was immediately visible. The lawn in front of the auditorium for the public hearing was peppered with Enviva’s signs and a sponsored food truck was in attendance. The space which should be neutral and welcoming for ALL constituents was consumed by the industry. It created an air that a winner, Enviva, had already been chosen, even before the hearing began. One of it’s signs on full display right as one entered the building said, “We hold job fairs, not stop signs”, a clear attack on the stop signs we carry to each public hearing which read “Stop Enviva”.

This is a pattern that has been seen before. At the hearing for Enviva’s Richmond County plant in November, the NC Department of Air Quality had Enviva promotional materials placed on their registration tables. In each instance, no opportunity had been given to other groups to display their materials, and yet Enviva received special treatment.

A packed public hearing auditorium, displaying a sign that reads, “Governor Cooper: This is your climate legacy”.

As the hearing progressed, this special treatment continued. Time after time, government officials got up to speak up in support of the industry. Staff from Senator Brent Jackson’s office, the Mount Olive Chamber of Commerce, local firefighters, and more all stood up to speak for the industry. Each of these people were elected or hired to represent and work for all of their constituents. Yet they chose to take a side, directly in contradiction with the wishes of many of their community members sitting in the very same room. 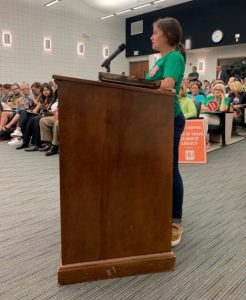 Nevertheless, community members and environmentalists continued to get up and rebut the false allegations stated by the industry and its supporters. Personal stories and science were woven together to create a robust story Enviva doesn’t want people to hear. Enviva’s actions worsen climate change, harm public health, devastate forests, and do not provide extensive job creation. The Department of Environmental Quality and the office of Governor Cooper need to listen or they will be on the wrong side of history.

RCC’s Associate Director, Alexandra Wisner, spoke at the hearing. As a native of Eastern North Carolina, the issue is especially relevant to her future. Her home and community has continued to be devastated by worsening storms like Hurricane Florence all while North Carolina continues to allow an industry to take away the few protections they have left. Forests and wetlands absorb flood waters and provide buffers from intense winds. As climate change worsens every year, it is unacceptable to strip communities like hers of the few protections they have left just to turn a profit. 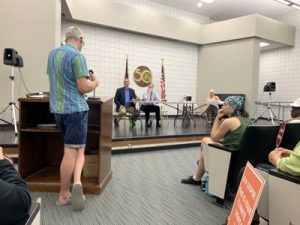 Richard Wainwright of FERN an organization against wood pellets in the UK.

About halfway through, Richard Wainwright of the United Kingdom also spoke. He detailed the effects that burning wood pellets has on the communities of the UK, who consume the majority of wood pellets produced in North Carolina. He pointed out that if the UK continues to buy into wood pellets, they will never meet their climate goals, and one day soon, they will wake up to this reality. He concluded by posing a critical question to the room, “Why do you think we are importing wood pellets instead of cutting down our own forests?”.

So, why is that the case? Is it because the preservation and expansion of biodiverse forests are the best way to bring carbon levels down in the atmosphere? Is it so that the UK can continue to count their forests as carbon sinks to meet climate goals? 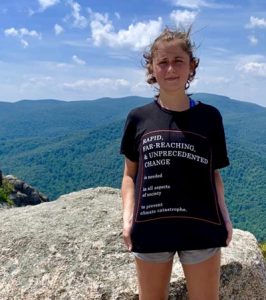 Alexandra Wisner in Shenandoah National Park. Her shirt reads “Rapid, far-Reaching & unprecedented change is needed in all aspects of society to prevent climate catastrophe” and is from the recent IPCC report.

No matter what the reason may be, the science and the people are clear.

We want a world where all can continue to wonder at the splendor of nature. We do not want to see war zones of tree stumps.

We want our natural history to continue in the forests. We do not want to lose the trees we grew to love.

“We stand now where two roads diverge. But unlike the roads in Robert Frost’s familiar poem, they are not equally fair. The road we have long been traveling is deceptively easy, a smooth superhighway on which we progress with great speed, but at its end lies disaster. The other fork of the road — the one less traveled by — offers our last, our only chance to reach a destination that assures the preservation of the earth.”

Although we travel the more difficult road, it is the right one, and we will continue to fight until a just, sustainable future is attained for all.