Strong Women and the Vote

“Your foremothers at Meredith College fought for the right to vote,” RCC President Dr. Bob Musil told his audience in the Jones Auditorium of Meredith College, a nationally ranked women’s college in Raleigh, North Carolina. “Look at them, standing tall in white dresses and with suffrage banners on the steps of Meredith College’s old Victorian building in 1918.” Musil explained, “These strong Meredith women are on the cover of The Status of Women in North Carolina Politics, released by Meredith even as I am speaking, one hundred years after your foremothers marched.” Dr. Musil added that “today, a century after that historic struggle, women make up less than 25% of North Carolina elected offices.” 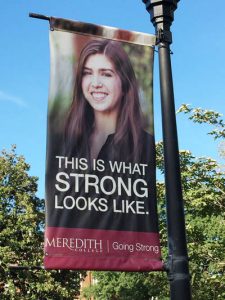 Musil called on the women of Meredith to also take up banners and march, organize, and vote. “You have a male-dominated and reactionary General Assembly and legislation that is harming the environment, causing climate change, and affecting poor people and people of color throughout North Carolina.” Echoing the college’s constant theme of educating strong women, Musil said, “North Carolina and the nation once again need the strong women of Meredith. I call on you to join in the proud tradition of your foremothers. We need you to engage, to educate, to organize, to vote, and even run for office, around the great issues of our time.”

Dr. Musil was at Meredith College for two days at the invitation of the Department of Biological Sciences and the Environmental Sustainability program with support from the Kenan Foundation. In his evening lecture, Musil was hosted by Dr. Erin Lindquist, head of the Environmental Sustainability program, and introduced by student leader Lainey Ward. Musil spoke about “Rachel Carson’s Legacy and North Carolina,” describing how “another strong woman who went to a women’s college, Rachel Carson” was inspired by the beaches of North Carolina in her first job with the U.S. Fish and Wildlife Service. Carson carried out research about the ocean at the old Bureau of Fisheries laboratory in Beaufort where there is now a Rachel Carson Reserve.

The result was an article that led to the first of Carson’s four best-selling books, Under the Sea-Wind. Its lyrical prose and loving description of creatures like Rynchops, the Black Skimmer, and Scomber, the mackerel, reveal Rachel Carson’s most important legacy – her environmental ethic that refuses to see any species or any human as an “other.” Carson believed that without empathy for all living things, humans become dangerous and can objectify, distain, dismiss, and, ultimately, destroy the “other.” In contrast, Musil went on to describe the awe, wonder and empathy that a Meredith undergraduate showed in finding a tiny salamander on her field trip that day to the Prairie Ridge EcoStation of the North Carolina Museum of Natural Science. Musil had accompanied her class with one of his hosts, Professor of Earth Sciences, Matt Stutz, to look at ecosystems and examine the effects of soil and stream erosion. “Look it is so tiny. I hope it is OK. It is looking right at me with those big eyes,” the student exclaimed as the tiny creature balanced on her clipboard.

Although best known for her 1962 book, Silent Spring, and her opposition to the needless and widespread use of pesticides like DDT, Carson’s ethic led her and her legacy organization, today’s Rachel Carson Council, to see issues as connected. Carson wrote about, or was aware of, not only pesticides and other toxic chemicals, but also changes in the ocean, the earliest warnings of global climate change, the dangers of nuclear weapons and radioactive waste, and the horrors of the first factory farms, or CAFOs (Concentrated Animal Feeding Operations). 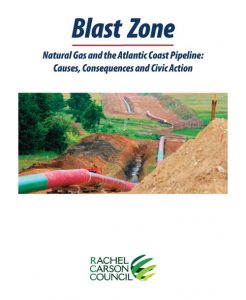 Thus, in North Carolina, the Rachel Carson Council works on all these issues. Under the rubric of climate justice, the RCC carries out research and issues reports such as Pork and Pollution, Fowl Matters, and Blast Zone. It also organizes in communities and on campuses around the combined adverse effects of the Atlantic Coast Pipeline (ACP) and other natural gas infrastructure, hog and chicken CAFOs, and the destruction of forests to produce wood pellets in industrial quantities that are shipped to Europe to produce electricity.

In every case, the people who are most harmed by working in or living near these facilities are predominatly poor and disproportionately people of color – African Americans, Latinos, and indigenous people such as the Lumbee Nation. Carson herself worked in graduate school with biologists who were among the first to denounce the racist theories of eugenics and join the NAACP, while her good friend and literary agent, Marie Rodell, brought out Dr. Martin Luther King, Jr.’s first book, Stride Toward Freedom, in 1957.

In concluding his lecture, RCC President Musil called on the strong women of Meredith to join the RCC and other organizations in the ongoing struggle for climate justice and for the democratic rights critical to achieving it. He vowed to teach, to march, to organize, and vote alongside them for his remaining “couple of decades.” Then, Musil concluded, “In my final days, you can wheel me back here into Jones Auditorium, where I will be happy and proud to see you all again – strong women — who have changed this state, this nation, and the world.”