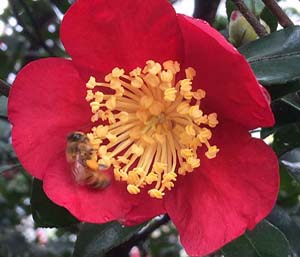 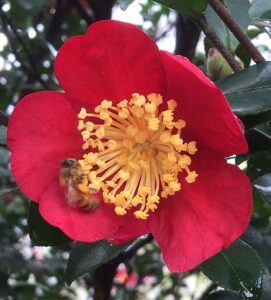 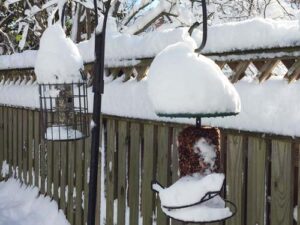 I stood in shirt sleeves and watched a honeybee settle into the bright red and yellow camellia blossom in my Bethesda yard. It was about 63˚F, but it was January 2, not April 2. The next day, temperatures plunged and some eight inches of snow bent my camellia bush to the ground and sent birds scrambling for my snow-laden feeders. We no longer need evidence of climate change and disruption, but the burying of my camellia seems an apt metaphor for the times. 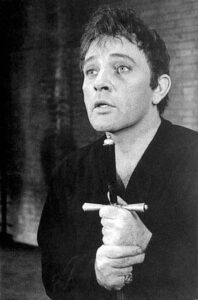 Shakespeare understood usurpation and violent plots, but what to do now? I feel like Hamlet, “The time is out of joint: O cursed spite That ever I was born to set it right”. 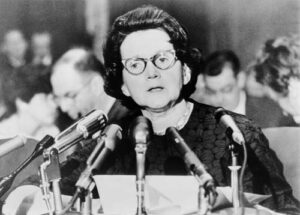 As an environmental, peace and justice leader, I have for decades tried to speak out, act boldly, and inspire others where I can with a positive vision of what could be, not with cries of gloom and doom, or mere angry denunciation. Rachel Carson’s determination to speak out, to not remain silent has helped guide me in recent years, along with her principled, yet pragmatic engagement with policy and politics. But are such sentiments enough in these times when, indeed, something is rotten in the state of Denmark?

The President and Democrats in Congress have made calculated compromises when necessary to get any change at all, to have any climate outcome in Glasgow, to pass a shrunken infrastructure bill. Much good has come from this traditional, dare I say, establishment approach to politics as if we were living in the Eisenhower years. But the unravelling of our democracy continues apace. I look for, long for, signs of hope, for stronger stuff in the face of potential tyranny. 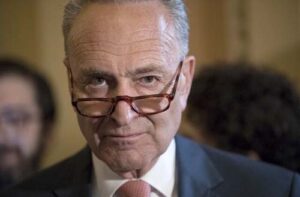 Hamlet worried, delayed, dithered and finally, too late, took action. Yes, we get a predictably tragic, bloody ending. We must instead “take arms against a sea of troubles,” before it is too late for us. I see signs that Republican intransigence may have at last moved establishment leaders to realize that these are not ordinary times, that strong measures must be taken. For one, Senate Majority Leader, Chuck Schumer, a consummate politician, has had enough. As the year begins and the weather and the nation swing between extremes, Schumer has vowed to bring forward the Voting Rights Bill under procedures that would prohibit filibustering. “If the right to vote is the cornerstone of our democracy, then how can we in good conscience allow for a situation in which the Republican Party can debate and pass voter suppression laws at the State level with only a simple majority vote, but not allow the United States Senate to do the same?”

Schumer has said he will demand action by January 17, Martin Luther King’s birthday holiday. “We can and must take strong action to stop this anti-democratic march.” This is the stance that is needed for these troubled, rank times. We must act decisively, boldly, without fear or dithering. You and I must not continue like Hamlet. We must demand of Senators Manchin and Sinema and every Senator, every citizen, within our hearing, “Save Our Democracy!” Passing the Voting Rights bill without the filibuster is a first, single step. More will be needed. But, in these times, we can have Spring in January. If we demand it.