Silence is Not Golden

In 1962, Rachel Carson published her groundbreaking book Silent Spring. It begins with “a fable for tomorrow” in which she eloquently describes the dangers of indiscriminate pesticide use, and the damage it causes to birds, wildlife, pollinators, livestock, pets, and even humans. The title pointed to a loss of bird song leaving a “silent spring.” Carson’s best-seller spawned the modern environmental movement and left a powerful impression on the public as well as then President John F. Kennedy who was spurred to action and praised the book in a press conference after its release in September. 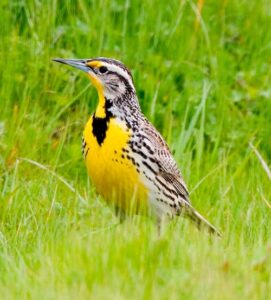 Over the following decades her “fable” has become a horrifying reality as bird populations plummet at alarming rates. Since 1970, nearly all habitats in North America have witnessed serious bird population decline of over three billion birds — an overall decline of 29 percent! Hardest hit are the grassland birds such as sparrows and meadowlarks. The North American Breeding Bird Survey and the Audubon Christmas Bird Count show more than 700 million birds across 31 species that live in fields and farm areas have vanished since 1970 due to intensified agriculture, higher levels use of pesticide use, and conversion of prairie land to cropland.

What can we do to help birds?

Here are 5 easy steps you can take to be bird friendly citizens.

1. Window treatments and turn out lights.

It’s estimated that almost one billion birds die each year after flying into windows. Birds see reflections in glass as habitat and at night they are drawn to lights. Start with the most obvious windows:

• Any window where you have heard a bird hit or found a dead bird.

External screens and adding stickers can break up the reflections. At night, close the blinds or curtains and turn out the lights. You save money and save birds!

Birds have fewer and fewer places to safely rest during migration. Between 1982 and 1997 more than 10 million acres of land in the U.S. was changed to developed land from good bird habitat. Native plants provide food and shelter providing nectar, seeds, berries and insects that sustain birds. Consider converting some of your lawn to a more bird friendly space. Not sure what plants are native to your area? Click here for Native Plant Nursery Directory from Plant Native. This directory provides a list of native plant nurseries and sources of native plants, broken down by state.

It’s estimated that cats kill more than 2.4 billion birds per year. There are tens of millions of outdoor cats and even well-fed cats will hunt and kill. When a cat plays with a toy, it is practicing predatory behaviors. These behaviors outdoors are deadly for birds and other wildlife. Predation by domestic cats is the number-one direct, human-caused threat to birds in the United States and Canada. I have 2 cats and solved this problem by building them a simple outdoor “catio” which is basically a chicken-wire fenced in area outside with a cat door to go in and out as they please. They watch birds and squirrels, but no hunting. 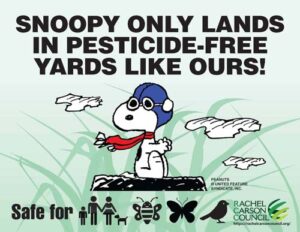 Most of the pesticides we use are highly toxic to birds and other wildlife. Common weed killers directly harm birds through contact or indirectly when the birds eat seeds or prey that are contaminated. Pesticides also harm birds by reducing the number of insects birds need to survive. Buy organic foods and stop using pesticides around your home, on your yard or gardens. Click here to get a free PDF of RCC’s Snoopy only lands in Pesticide-Free Yards Like Ours! yard sign. You can buy a laminated sign at the RCC Shop. 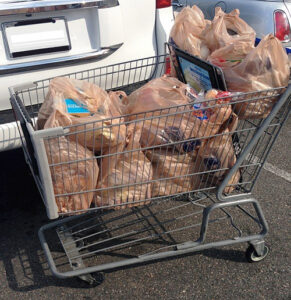 Almost 5,000 million metric tons of plastic has been estimated to be piling up in landfills and polluting the ocean. An estimated 80 species of seabirds ingest plastic because they mistake for food. Avoid using single-use plastics, including bags, bottles, wrappingss and disposable utensils. Choose reusable or compostable items, but if you do have disposable plastic, be sure to recycle it.

We all make difference and taking these simple steps can help birds thrive and we can continue to enjoy their beauty and song.

Ross A. Feldner, RCC Board Member

Ross Feldner is the lead, with Bob Musil, of the RCC Bird Watch and Wonder Program. Ross is a life-long birder and photographer who is the editor of the Friends of Patuxent National Wildlife Refuge newsletter. Ross also serves as a guide at the Patuxent National Wildlife Refuge, a frequent birding spot for Rachel Carson who first learned about the health effects of DDT at the laboratory there. He is also the owner/art director of New Age Graphics, a full-service graphic design firm in Wheaton, MD.