Over the weekend, climate strikes swept across the nation as activists sought to apply pressure on world leaders gathering in New York for the annual United Nations General Assembly. The demands are simple, as activists are calling on leaders to take the most aggressive stances to defeat the climate crisis.

Over the course of 2019, the public’s concern about the climate crisis has continued to grow. Many voters in the US now list addressing climate change as one of their top concerns. The dramatic increase in climate activism has come from incredible youth movements across the globe. In the Spring of this year, hundreds of thousands of students across the world participated in a global school strike to demand action on climate. Members of the Sunrise Movement have doggedly pressed American politicians throughout the year calling for a climate debate among presidential candidates and a Green New Deal. And in addition to its long-standing calls for climate action, the Rachel Carson Council has started a Fellowship program to support young organizers working on divestment, resisting fossil fuel infrastructure, and many other issues on campuses and in communities across the Southeast. 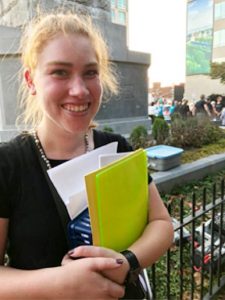 In North Carolina, RCC Fellow Kelsey Hall (UNC-Asheville) helped organize a climate justice rally in Asheville in coordination with other groups. Kelsey said “We had an amazing turnout and it was so empowering to see all of these incredible people and organizations come together, and also to see our hard work over the past four plus months in action. The climate rally was a slam dunk and we were only a small ripple in the larger international movement.”

Though the strikes and rallies were incredibly well attended, the challenge remains to translate them into true political power. Even as Greta Thunberg gave an incredibly rousing speech challenging world leaders to take bold action on climate, President Donald Trump was still able to summarily dismiss her with a tweet. Incredible grassroots organizing continues to happen across the country, however, as in Virginia where RCC fellows are working to block the construction of a natural gas pipeline through the state. As the pressure continues to build, we must support those efforts and continue to press our political leaders to take the boldest stances possible to address the climate crisis; then get out and vote to elect them.