The dramatic drop in monarch populations, from about a billion to only 33 million in 2013, prompts Musil to uncover the complex causes of monarch decline. Monarchs were particularly meaningful to Rachel Carson, who watched the butterflies’ migration with her close friend Dorothy Freeman. Knowing she was dying from breast cancer, Rachel wrote to Dorothy, “but most of all, I shall remember the monarchs.” As he sits with his wife in a pollinator garden planted in the backyard, Musil realizes that the return of the monarchs is no longer certain. 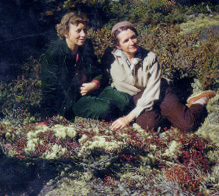 Rachel Carson knew she was dying as she wrote fondly to her friend, Dorothy Freeman, of their time together. “But most of all, I shall remember the Monarchs.” Rachel and Dorothy had shared precious final moments watching migrating Monarchs float and dance and settle onto flowers to refuel as they passed where the two women sat together at the Newagen Inn, not far from Rachel’s cottage in Southport, Maine. After Rachel died, Dorothy scattered her ashes to the sea by the rocks near where they had marveled at the fragility and beauty of life. 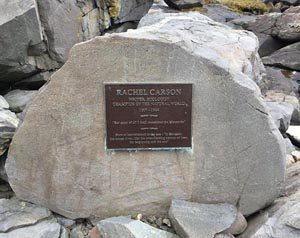 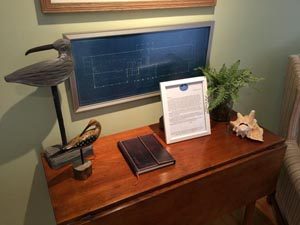 Rachel’s letter to Dorothy, along with a few of her books that sit on a table like an altar inside the inn, and a weathered bronze plaque amongst the nearby rocks at seaside, are almost unbearably poignant. We want more of Rachel Carson, torn from us too early by breast cancer. We want more of the love she shared with Dorothy, and with so many. And, we want the Monarchs always to return, floating beautiful and free above our worldly cares. 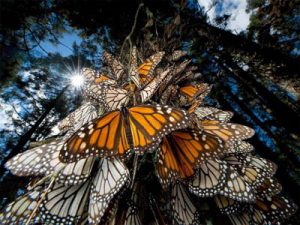 I have loved Monarchs since I was a boy on Long Island. They sipped zinnias in my mother’s garden and flew gently around the weedy fields of milkweed and Queen Anne’s lace behind our house. I watched in awe one fall as they gathered by the thousands in the dunes at Jones Beach before beginning a mysterious migration to some place on the planet that, shortly after World War II, was not yet known. I have longed to see a Monarch migration ever since. I have rued missing them arrive in Pacific Grove, California, where thousands overwinter and there is a sanctuary and festival in their honor.

Scientists ultimately discovered where my Long Island Monarchs migrate in winter with their small striped orange wings tilted to the wind. East Coast Monarchs usually migrate some 2,500 miles to Mexico where they live in Oyamel fir trees. In 1986, the Mexican government converted 62 square miles of forests in the Sierra Madres to the now renowned Monarch Butterfly Biosphere Reserve, home during the winter to hundreds of millions of Monarch butterflies. 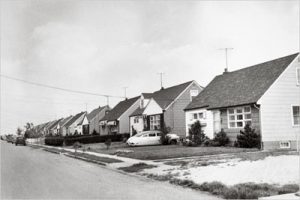 Yet the numbers of everyone’s most familiar and favorite butterfly have been declining over the years. I watched as Long Island was rapidly developed with huge housing tracts, crowded highways, shopping malls, and the relentless reduction of open spaces – family farms, woods, and weedy fields. After I saw my Monarch migration, Long Island was doused with DDT and other pesticides. I ran behind DDT trucks that sprayed my street; I watched the fogging of Jones Beach with DDT where I had seen my Monarchs. Development, sprawl, and pesticides have long since migrated from Long Island across the nation. Butterfly numbers began to plunge. Then development and logging reached even into the once unknown mountain homes of the Monarchs. By 2013, Monarchs that once numbered about a billion in their winter homes in the mountains of central Mexico were reduced to 33 million. The causes of Monarch decline are complex. But, in addition to development, global climate change, the reduction of fields of milkweed, and the use of GMO crops and the increased use of herbicides that go along with them, are all guilty. 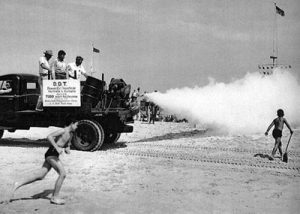 The decline of Monarchs and common milkweed (Asclepius syriaca), the only plant species on which they will lay their eggs, led to a swift and widespread response from citizens and environmental groups. We now plant milkweed in fields, in schoolyards, around homes, and, with other plant species, in rain gardens (to soak up runoff) and pollinator gardens (that also help declining honeybees). Weeds have become chic.

Widespread concern for the Monarch, both in the United States and Mexico, has begun to reverse its slow disappearance. The most recent count of Monarchs overwintering in Mexico shows them covering four hectares, (a hectare is 2.47 acres) up from the disastrous low of .67 hectares in 2013. But there is still far to go to get back to the heights of a billion monarchs covering eight or more hectares in the late twentieth century.

As in my youth, development and the use of pesticides and herbicides are still the biggest danger for Monarchs in the U.S. Preserving (and even increasing) fields, small farms, and other open spaces is essential. Providing more milkweed havens in schools and backyards and gardens is also critical. Same for giving up chemical weed killers. Nevertheless, perhaps the single greatest step that Americans can take, in addition to these local and individual efforts, is to fight collectively with environmental groups the increasing use of GMO crops and the powerful herbicides that are used with them. Modified to resist chemicals, GMO crops like soybeans are then heavily sprayed with Monsanto’s Roundup (glyphosate), killing off the “weeds,” including milkweed, that grow alongside them.

Meanwhile, my own suburban yard has more milkweed and other “weeds” each year. Recently, my wife and I added a pollinator garden behind a small stone wall in one of the few sunny spots in our front yard. The Monarchs and other butterflies responded; they greet us as we walk out the door, lifting our spirits to face the often harsh realities of a world in turmoil. Today, in October, a cool front is moving in. The Monarchs will leave us soon. But for now, they dip and circle and return to the flowers next to us as we sit together on the wall, holding our breaths in wonder, offering silent prayers that these gentle, beautiful creatures will always return.

I think of Rachel and Dorothy who sat like this in close, shared silence, and in wonder, so many years ago. I shall not be able to write or say to my wife “But most of all, I shall always remember the Monarchs.” Their return is no longer certain; it will depend heavily upon what we humans do. We can and must take our inspiration from the Monarchs while they visit us. But it is from the love and determination and bravery of Rachel herself, who, in the face of death, gave us the warnings of Silent Spring, fought back against corporations who attacked her, and took action to protect the beauty and mystery of nature, that we still must learn.

We have recently learned of an excellent DIY butterfly garden blog from a friend in England:

The Ultimate Guide to Butterflies & How to Prevent Their Decline

Butterflies and moths have been around for millions of years. They used to be a common sight in gardens, but numbers have declined since the 1940s along with our other native wildlife species such as bees and hedgehogs.

It will come as no surprise to hear this loss is due to destruction of natural habitats such as wildflower meadows, peatbogs and ancient woodlands in favour of intensive farming practices, roads and housing developments that have stripped away the majority of their nesting and foods sites.

Climate change is partly responsible for butterfly decline too, producing wetter weather that alters the distribution of certain species.

The relentless march forward of ‘progress’ damages our 56 species of butterfly and 2,500 species of moths who are sensitive to change – but your garden can help them find food and shelter.