Oceans cover more than 70% of planet Earth. Those who have watched as waves crash in the surf, as tides ebb and flow and the winds blow in gusts of salty air, may guess at the immense energy and power that moves through the ocean. Harnessing the energy of oceanic winds and tides could decrease our dependence on fossil fuels. As our atmosphere warms from emissions of the fossil fuel industry, we must push forward on the path towards clean energy, away from finite and polluting sources. That path may lead us shoreward, into the open ocean. 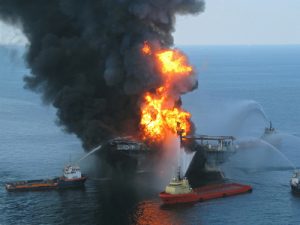 Today, our oceans are exploited for fossil fuel reserves buried deep under the seafloor. Seismic blasts, one of the loudest sounds man can make, rattle the oceans in search of oil and gas. The noise of these blasts harms all ocean life from tiny zooplankton to the endangered North Atlantic Right Whale. The damage only amplifies once reserves are found: Offshore oil rigs are prone to leaks and spills, such as the BP Deepwater Horizon spill, that are ecologically and economically devastating. Considering that offshore oil and gas development risks 1.4 million jobs in the tourism, recreation, and fishing industry  which rely on healthy ocean ecosystems, it is no surprise that more 200 coastal communities and 13 of 14 East Coast governors oppose offshore drilling.

Offshore wind has the potential to generate large amounts of clean energy. In fact, scientists estimate that offshore wind in the North Atlantic could generate three times the amount of power than on land. Currently, there is only one complete offshore wind project in the United States, the Block Island Wind Farm, but many more are in active development along the East Coast. And expansion in wind energy would produce twice the number of jobs and twice the amount of energy as offshore drilling. In addition, the cost of electricity from offshore wind is decreasing and expected to continue on a downward trend.

The movements of the tides are yet another intersection of the oceans and energy. While tidal power is in earlier phases of development compared to wind, researchers and innovators are working to develop the best technology to harness the dynamic power of the tides. Successful tidal power plants have been constructed across the world in South Korea, France, Canada, and the UK. The U.S. does not yet have tidal power stations, but there is the potential along coasts in states such as Alaska, Washington, and Maine.

Of course, green energy technology still requires inputs and resources, especially metals and minerals, which are abundant in deep sea beds. For seabed mining, we are already creating regulations and mining in deep sea ecosystems that we do not yet fully understand. As Rachel Carson wrote, “We can only sense that in the deep and turbulent recesses of the sea are hidden mysteries far greater than any we have solved.”

So, as we look to the oceans for the energy to power our fast-paced world, we must pause to consider the mysteries of landscapes and complexities of life that we do not fully comprehend. For if we do not know what is there, we cannot know what we have lost if we act without caution and consciousness. The RCC supports a clean energy future that shifts away from fossil fuels and works in harmony with marine ecosystems.

The Ocean Is Climate Change’s First Victim and Last Resort

Rain forests may be known as the planet’s lungs, but it’s when standing before the seas, with their crashing waves and ceaselessly cycling tides, that we feel the earth breathe. The ocean, say scientists, is the source of all life on earth. It is also, say philosophers, the embodiment of life’s greatest terror: the unknown and uncontrollable.

This duality has become increasingly manifest in the climate discourse of recent years, as ice melts, seas rise, and shores everywhere face storms of a ferocity unseen in living memory. Read more

Ice World: Antarctica’s Riskiest Glacier is Under Assault From Below and Losing Its Grip

Flying over Antarctica, it’s hard to see what all the fuss is about. Like a gigantic wedding cake, the frosting of snow on top of the world’s largest ice sheet looks smooth and unblemished, beautiful and perfectly white. Little swirls of snow dunes cover the surface.

But as you approach the edge of the ice sheet, a sense of tremendous underlying power emerges. Cracks appear in the surface, sometimes organized like a washboard, and sometimes a complete chaos of spires and ridges, revealing the pale blue crystalline heart of the ice below. Read more

Sign Up Here to Receive the Monthly RCC Coasts and Ocean Observer and Other RCC newsletters, Information and Alerts.