The dazzling vibrancy of coral reefs, the fleeting streaks of color as shorebirds alight, flying up and above the waves, the sight of young sea turtles flecked with granules of sand, clambering for open ocean, the bioluminescence of extraordinary organisms churning in deep sea; When we catch glimpses of the myriad life dotting the ocean’s blue expanse, we are often struck by its beauty. But marine life is not only vibrant; it is vital.

So much as the visible compels us, it is the invisible that sustains us. Marine microbes, which drive carbon sequestration in the oceans, comprise more than 98% of ocean biomass. Floating in delicate glass walls of Silica, diatoms, a type of phytoplankton, produce one fifth of the air we breathe. Collectively, phytoplankton are responsible for every other breath we take. These tiny organisms also form the basis of marine foods webs that support Earth’s largest animal, the blue whale. 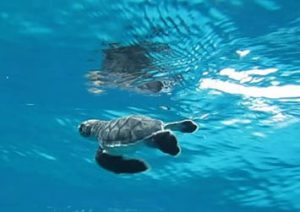 Larger species also support marine ecosystems. Green sea turtles, for example, foster healthy seagrass meadows and coral reefs, critical habitats for commercial fish species that billions depend upon for their livelihoods or food security. Whales act as ecosystem engineers, recycling nutrients and increasing ocean productivity. As top predators, sharks are good indicators of ocean health and keep marine food webs in balance. These are just a few examples of the roles marine species play on the greater stage of life.

Federal protection of endangered species has allowed some marine life to come back from dramatic declines: 77% of marine mammals and sea turtles listed under the Endangered Species Act are recovering in population size. In 2016, humpback whales had recovered so much that most populations were taken off the endangered species list. Marine mammals not listed as endangered are still protected by the Marine Mammal Protection Act. 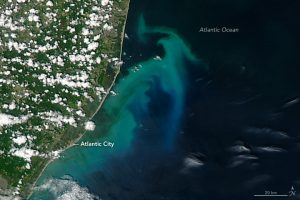 Despite recovery of some species, many forms of life, such as shore birds, are still facing rapid decline. A confluence of climatic threats to the ocean pushes marine life to a precarious existence. The ocean is 30% more acidic than it was before industrialization. As the ocean absorbs carbon from the atmosphere, it forms carbonic acid which dissolves calcium carbonate structures of corals, mussels, clams, oysters, and starfish. The ocean is not only acidifying but also gasping for air: over the past 50 years, the volume of ocean with no oxygen has quadrupled. Oxygen is consumed by algal blooms spurred by warming temperatures and nutrient overload from sewage and agricultural run-off spilling from land into our seas.

We come from life in the ocean — the chemistry of our bodies is testament to that past. As Rachel Carson wrote in The Sea Around Us,

“Fish, amphibian, and reptile, warm-blooded bird and mammal — each of us carries in our veins a salty stream in which the elements sodium, potassium, and calcium are combined in almost the same proportions as in sea water.”

The makeup of our atoms is not unlike that of the sea. Without ever splashing our feet into its salty waters, we all connect to the ocean in this way.

Some may know the ocean personally, some may know it through photos, art, or the work of marine scientists such as Rachel Carson, whose book Under the Sea-Wind transforms an imagination of ocean life into a vivid reality. The RCC seeks to continue to bring the ocean to life, highlighting our interconnectedness with the sea and our need to protect it.

A Baby Sea Turtle’s Mad Dash For the Sea is Perilous. A Fake Egg Could Make it Safer.

A team of scientists dubbed “Nerds Without Borders” developed a sensor—disguised as a turtle egg—to predict when hatchlings head for the sea.

A scramble across a narrow strip of beach is perhaps the most perilous journey in the life of an endangered sea turtle.

Freshly hatched and no bigger than a mouse, turtle hatchlings emerge from sandy underground nests in the night and head for the surf. Before reaching the water they must evade hungry seabirds and poachers. They need to avoid getting disoriented by light pollution.

Dr. David Shiffman’s favorite thing to talk about are sharks, and has been since he was very young.

“I’ve loved sharks for a really, really long time, since I was younger than anyone in this room,” Shiffman said to a few dozen last month at North Carolina Maritime Museum in Beaufort.

Shiffman, an interdisciplinary marine conservation biologist who specializes in the ecology and conservation of sharks, stopped in the Carteret County town as part of the tour for his book, “Why Sharks Matter: A Deep Dive with the World’s Most Misunderstood Predator.” His book is available at the museum’s gift shop. Read more

Nearly all species of sea turtles are considered endangered, according to WWF. Despite this, people have continued to poach them for food, medicine and luxury goods in astonishing numbers.

The first ever global assessment of illegal sea turtle hunting to consider multiple countries and regions, published in Global Change Biology Wednesday, found that more than 1.1 million turtles had been illegally hunted and killed in the last three decades. Further, more than 44,000 were killed yearly over the last 10 years. Read more

In the Mind of a Whale

How can we make sense of the biggest brains on the planet?

Brains are complex and delicate organs—and whale brains especially so. Few whales are in good condition when they beach. Fewer still are reached in time to extract the brain before it decomposes. It’s the first organ to go because the sensitive tissues are pressure-cooked deep inside the dying animal’s skull by body heat the whale cannot release. And rare are the people with the skills to extract and preserve them. Cetaceans were long thought to have simple, undeveloped brains, because whenever scientists would get inside a dead dolphin’s head, it had often already turned to sloppy mush. A good-quality whale brain is gold dust. Read more

Sign Up Here to Receive the Monthly RCC Coasts and Ocean Observer and Other RCC newsletters, Information and Alerts.