Climate change and sea level rise are global issues, but the effects are experienced locally. Communities along the eastern coast of the United States are facing rates of sea level rise much higher than the global average. Globally, sea levels are rising about an eighth of an inch per year. But in places from North Carolina to Florida, sea levels rose up to 5 inches between 2011 and 2015. Faster rates of sea level rise on the east coast are partly due to geology and changes in the ocean and wind currents that moderate our climate. But there can be no doubt that continuing climate change and rising seas pose a serious threat to one of the most densely populated parts of the United States. Critical action to both mitigate climate change and make coast areas more resilient is required.

Coastal resilience is the ability of people to recover and adapt to the threats of climate change that inundate coasts––particularly minority and low-income communities which, due to systemic discrimination and injustice, are more likely to live in floodplains and have limited resources to recover from the impacts of intensifying hurricanes, increasing flooding, and sea level rise.

As our warming world holds more moisture and provides more heat energy to tropical storms, hurricane intensity is increasing, threatening the livelihoods of people living on the coast. Rising water levels increase flooding events, presenting a public health concern, as many city sewer systems are in poor condition and unable to handle excess water. In September 2018, Hurricane Florence battered communities in North Carolina that were already dealing with a number of environmental health hazards from coal ash and CAFO pollution to chemicals in drinking water. 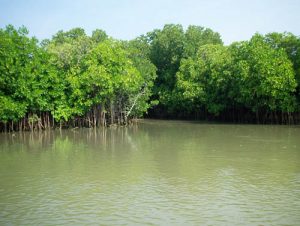 Coastlines respond to the confluence of climate change effects on terrestrial and marine ecosystems. Wetlands act as natural barriers that buffer land from rising seas. Marshes, swamps, and mangroves mitigate property damage due to hurricanes, reduce coastline erosion, and improve water quality by filtering out heavy metals and toxins. Unfortunately, sea level rise is projected to drown large portions of mangrove forests and push marsh habitat inland, leaving us to face a difficult question: what will happen to life at the edge of the sea?

Smart city planning may prepare and aid urban areas adapting to our changing climate. Cities along the Atlantic seaboard are also implementing proactive, natural solutions such as restoring wetlands and building oyster reefs. Still, response to this crisis requires support from states and federal government to improve infrastructure, prepare communities, and spearhead restoration efforts. And as we seek coastal resilience, it is important to think about who is facing the brunt of climate change and who has the means to turn away from the storm. The fight for coastal resilience is a fight for those most vulnerable, for life at the edge of our shifting shores.

Cape Fear River Ghost Trees: What Stories Could They Speak?

The Cape Fear River is a historic and important body of water in North Carolina, flowing through the communities of Wilmington, Leland, Belville all the way to Southport and beyond. This river is our primary source of drinking water. For centuries, eons for that matter, it has been home to valuable wetlands and floodplains, diverse wildlife, and fish, and more recently a history steeped in our unique heritage and culture. Read more

Once Overlooked, Latinos are Emerging as Passionate Allies for Ocean Conservation

A national poll found overwhelming support among Latinos for measures to protect oceans. Grassroots organizers are turning that passion into action.

When Marce Gutiérrez-Graudiņš became active in ocean conservation a dozen years ago, one of the first things she noticed was how few Latinos were engaged in the cause. What’s more, she found there wasn’t much effort being spent to get Latino communities involved. Read more