May is the month for big-time bird migration! As our avian aviators head north, they have at least one thing on their minds — breeding. Yes. Sex. As in “the birds and the bees.” Singing their heads off, marking territory, building and repairing nests, bringing bugs and worms to the kiddies — keeping their species going amidst a warming planet and shrinking habitat.

In this month’s RCC Bird Watch and Wonder, we document the decline of North American bird species and why it matters. But you and the birds deserve some good news, too. Among our favorite stories is the story of an adorable pair of Piping Plovers, Nish and Nellie. They are noodling and nesting in Ohio at Maumee Bay State Park where Piping Plovers have been absent for 83 years. These little birds who nest on beaches are beginning to rebound along our coasts thanks to concerted conservation efforts and the protections of the 1985 Endangered Species Act.

Welcome to the April edition of the Rachel Carson Council’s Bird Watch and Wonder. In the midst of spring migration, we are ready to share some of the most important, interesting, and sometimes distressing bird and birding stories from the last month. But, as the illegal and horrifying Russian invasion of Ukraine grinds on with its huge human toll, we also look, in a special section, at the effects of war on the environment, including a powerful original essay by Bob Musil. In the “Books” section, you’ll also find Musil’s review essay on the latest writer to lay claim to the legacy of Rachel Carson – David George Haskell and his Sounds Wild and Broken.  And in the “Bird Lore” section, you’ll also find Ross Feldner with his latest, a fresh take on the astounding variety and diversity of birds, Flight of Fancy.

Spring 2022 officially began in the United States on March 20th. Flowers are blooming, the weather is warming, and birds will soon be on the move again. Keep an eye out for the bird species who migrated South in the winter, because many of them will return in April!

As well as being a month to mark the beginning of migration, March is women’s history month, and there is no better way to celebrate this overlap than sharing news about women who have improved the world for people and birds. Read about Rachel Carson and 6 other women whose activism has left a mark on the world here. Also, read about a woman who is advocating for changes in birding communities now, Corina Newsome. Corina is the co-organizer of Black Birders Week and her goal is to change the perception of who belongs in nature.

This month, the news overflowed with stories about birds! The Great Backyard Bird Count, a grassroots science event that uses eBird to compile data on birds around the world, occurred between February 18th and the 21st. Stories about the successes of this count were shared around the country, from Chicago to Monterey County, and around the world, from Canada to India. In fact, you can see how expansive this bird count is in real-time here. These community-run bird counting events allow scientists to conduct important research on bird populations and on how to best conserve these beloved species.

Despite the continuing pandemic and political turmoil, we hope the beginning of your 2022 has been restful and filled with birds! January is full of interesting waterfowl and other birds who visit only during the winter, so bundle up, head outside, and greet some of these visitors.

Over the last two months, headlines have also announced impressive new birding records, action, and advocacy. In Mission, Texas, Tiffany Kersten broke the U.S. record for most birds spotted in one year, seeing 726 species across 48 states! But, that’s not all she did. Tiffany spent her Big Year shedding light on the dangers that women face when birding, especially when alone. She explained it’s vital that safety is prioritized for women and other marginalized groups in outdoor settings so they are able to do what they love.

This December, as winter sets in and we reflect on 2021, remember all the bird news throughout the year the RCC has brought to your inbox. In April, we shared the first steps in the federal process to reinstate and strengthen the Migratory Bird Protection Act. Now, eight months later, that reinstatement has become official. We brought you bird art from poems to paintings and now photographic portraits. We followed movements like Birdability, reporting on its origin story in July and Birdability Week 2021 in October, and ones focused on anti-racism like Black Birders Week in May.

In October and early November, climate change and climate policy flooded the news. Bird’s fall migrations slowed, but the headlines picked up as more news was released about our changing climate and birds. From stories about birds and wind energy to film and book recommendations, this issue of RCC’s Bird Watch and Wonder will update you about our feathery friends.

In late October, we witnessed the first Birdability Week, a week dedicated to making birding accessible to everyone. Bird enthusiasts celebrated inclusive birding and the work of birders with disabilities through social media blasts, webinars, and, of course, birding! If you missed Birdability Week 2021, you can still catch up by watching the recordings included under the link above.

In September, birds took flight! The start of fall migration was packed with the ups and downs of bird news. From the sad news of multiple bird species announced as extinct to the uplifting reinstatement of important bird protections, this issue of Bird Watch and Wonder will help you catch up with our feathery friends.

On Wednesday, September 29th, we received the disturbing news that 23 species of birds, fish, and other wildlife are now officially presumed extinct. Nearly half of these 23 species are birds ranging from the beloved Ivory-billed woodpecker to the Large Kauai thrush. Eight of the extinct bird species come from Hawai’i alone with the remaining three from the U.S. Southeast and Guam. With changing climates, degrading habitats, and a variety of human threats, it is no surprise that birds are in danger, and that we are seeing extinctions increase.

This August, after a spring and early summer packed with migrating and breeding, birds and bird news quieted down. However, while parents were busy raising their young, the RCC found some important headlines for you.

Bird populations continue to be battered by worsening environmental dangers. August is an important month for baby birds, but, this year, their health was threatened by extreme heatand pesticides. On August 9th, the Intergovernmental Panel on Climate Change published their AR6 report, in which scientists announced more unequivocal evidence of the danger that humans and birds face as a result of human-caused climate change and its consequences. However, with the bad news comes some good. At the very end of July, Representative Alan Lowenthal (D-CA), Representative Brian Fitzpatrick (R-PA), and 46 other co-sponsors introduced the Migratory Bird Protection Act (MBPA) in the House to restore and strengthen bird protections. Keep an eye out for RCC action alerts about this bill!

From late June through mid-July, climate change caused an extreme heat wave in the United States with areas in the Pacific Northwest experiencing record breaking temperatures in the 110’s. This heat wave endangered houseless people, fieldworkers and laborers, and individuals without air conditioning. In fact, the heatwave in Oregon and Washington State alone killed 200 people and heat-related deaths increased overall. As humans faced this climate disaster, so did birds.Hawk chicks and other birds of prey were found injured or dead beneath trees after leaping from their nests to escape the heat.Across the world, other bird populations suffered through other climate-related crises such as migrating birds and the drought in California and shorebirds and severe red tides across Florida’s coasts.

June Bustled With Bird News.
From newly-published research on bird behavior to state-of-the-art birding technology, this issue of the RCC’s Bird Watch and Wonder is packed.

In early June, the RCC joined others in observing Black Birders Week, a celebration of Black birders that works to make birding inclusive. However, there is still a long way to go before the activity is truly welcoming to everyone. In June, birders, activists, and journalists spoke up about the racist legacy that many birds carry. Rather than having names based on appearance, behavior, or song, bird species often carry the names of those who discovered them. Some of these have racist and violent histories of terrorizing indigenous and black communities.

The American Ornithological Society is creating a committee charged with developing guidelines to identify and reform harmful English bird names in response to suggestions fromactivist groups, including Bird Names for Birds. 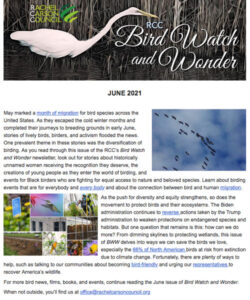 May marked a month of migration for bird species across the United States. As they escaped the cold winter months and completed their journeys to breeding grounds in early June, stories of lively birds, birders, and activism flooded the news. One prevalent theme in these stories was the diversification of birding. As you read through this issue of the RCC’s Bird Watch and Wonder newsletter, look out for stories about historically unnamed women receiving the recognition they deserve, the creations of young people as they enter the world of birding, and events for Black birderswho are fighting for equal access to nature and beloved species. Learn about birding events that are for everybody and every body and about the connection between bird and human migration.

Birds are on the move! In most parts of the country, so are those of us who think its fun to get a sore neck looking up into the trees for warblers. But along with spectacular migrations, the decline of birds and their habitat continues. So, in this May issue of RCC’s Bird Watch and Wonder, we offer actions you can take to protect our avian friends, as well as victories achieved such as Virginia’s new regulation to stop the deaths of migrating birds by “incidental take.”

There is also growing interest nationwide to improve the habitat of birds as in North Carolina’s famous barrier islands where Rachel Carson roamed and wrote. Urban and suburban environmentalists, too, are planting more and more pollinator and rain gardens to help butterflies and bees. But we are reminded that putting in shade trees like themighty oak is not only good for butterflies, bees, and climate change, but for birds and other animals as well. 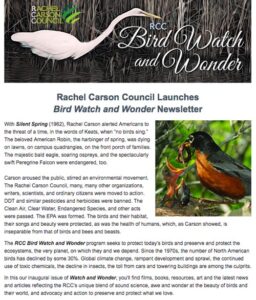 With Silent Spring (1962), Rachel Carson alerted Americans to the threat of a time, in the words of Keats, when “no birds sing.” The beloved American Robin, the harbinger of spring, was dying on lawns, on campus quadrangles, on the front porch of families. The majestic bald eagle, soaring ospreys, and the spectacularly swift Peregrine Falcon were endangered, too.

Carson aroused the public, stirred an environmental movement. The Rachel Carson Council, many, many other organizations, writers, scientists, and ordinary citizens were moved to action.