Much of what we know or learn about birds comes to us as narrative, as stories of discovery or loss, or of the sensational feats of our feathered friends. There is pathos in the passing in 1914 of Martha, the very last passenger pigeon on earth. She died alone in a Cincinnati zoo. We feel Martha’s death even more deeply because we have read or heard of John James Audubon’s account of a time when there were 3-5 billion passenger pigeons in the U.S., far more numerous than the starling or the House Sparrow. In Birds of America, Audubon tells us that in 1813 he watched miles-long waves of passenger pigeons wing overhead and darken the sky. “Before sunset I reached Louisville, distant from Hardensburgh fifty-five miles. The Pigeons were still passing in undiminished numbers, and continued to do so for three days in succession.” 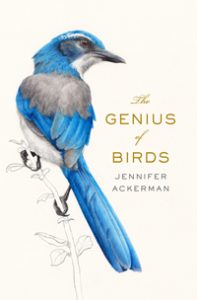 In The Narrow Edge: A Tiny Bird, An Ancient Crab and an Epic Journey, science writer Deborah Cramer takes us along on the miraculous 19,000 mile round trip from the tip of South American to the Artic and back by the small sandpiper called a Red Knot. In The Genius of Birds, science writer Jennifer Ackerman describes the amazing brilliance of “bird brains,” that hide up to thirty- three thousand seeds scattered over dozens of square miles and remembers where it put them months later. There’s a species that solves a classic puzzle at nearly the same pace as a five-year-old child, and one that’s an expert at picking locks. There are birds that can count and do simple math, make their own tools, move to the beat of music, comprehend basic principles of physics, remember the past, and plan for the future. 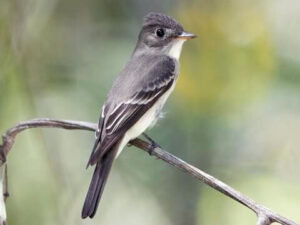 Wood Pewee. Photo credit: The Cornell Lab, All About Birds 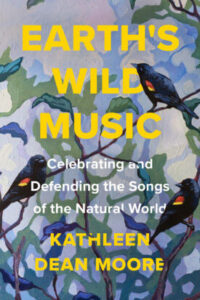 And sometimes writers simply share their joy at finding out something new about birds, how they sound and look, or about other writers like Rachel Carson who, fascinated by the sound of an Eastern wood pewee, transcribed its notes and sounds in her field notes. Kathleen Dean Moore in “Rachel’s Wood Pewee,” from Earth’s Wild Music, writes, “How joyfully she would have made the little marks, tracing the path of bird songs on the page. How deeply she must have wondered about the meaning of the marks she made.”

As with artists, there are writers of all kinds and all ages who jot down their stories about birds and the wonder of them. Rachel Carson wrote a story about house wrens for her father when she was four. But you do not have to be Rachel Carson, or a published author, to send us your own bird notes, journals, blogs, or articles. We will share the most interesting here — right alongside some of the best professional writing about birds that we collect and curate to spread their wonder as far as the Red Knot wings across the continents.

It is this sense of mystery, of delight and wonder, of empathy that is essential if we are ever to change how we act in the world. It is why we act to save the birds and the birthright of our planet. The RCC Bird Watch and Wonder program invites you to share your own stories, photos, observations, art, essays, as well as your actions and advocacy, with us so we can share them widely wherever birds, and those who watch and wonder, can be found. Rachel Carson believed it was as important to feel as to think. We intend to do both with the latest news and science and stories about birds and the world that together we inhabit. Join with us now to enter into the long, proud line of those who have loved the birds and fought to save them — and us.

The Latest on Bird Lore

Joy Is the Justice We Give Ourselves

Joy is the justice
we give ourselves.
It is Maya’s caged bird?
sung free past the prison bars,
holding spirits bound—
without due process,
without just cause.

Good News: A Good Year For Puffins and Terns, Despite Climate Change 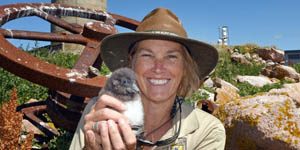 The title of supervisory wildlife biologist for the United States Fish and Wildlife Service does little justice to Linda Welch (pictured above). In practice, she is the housing and unusual development secretary for seabirds on Maine’s Petit Manan Island.

This was clear as she led me to nesting areas there for Atlantic puffins. Over the last half century, the bird has been restored from the brink of extinction in Maine, the only state where it breeds. Petit Manan is located about 20 miles east of Acadia National Park and is part of the Maine Coastal Islands National Wildlife Refuge. Read more