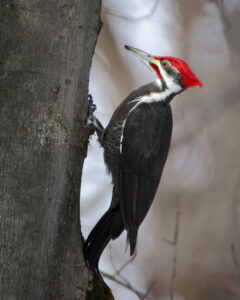 Remember your first sighting of a Pileated Woodpecker or a Peregrine Falcon? Or maybe your childhood discovery of a robin’s nest, or, sadly, the broken little blue eggshells beneath it?

The late-nineteenth century bird writing pioneer, Olive Thorne Miller, discovered a new bird species and wrote about it in the popular magazine, the Atlantic Monthly. She was then scolded publicly by the noted male ornithologist, William Brewster, for reporting her finding in a mere magazine instead of a proper scientific journal. He was embarrassed because well after her discovery he had announced in the Auk that he had found the new species. In a polite riposte, Miller wrote, “I should take pleasure in “sharing my discoveries’ were I so happy as to make any; but to me everything is a discovery; each bird on first sight, is a new creation; his manners and habits are a revelation, as fresh and interesting to me as if they had never been observed before.” 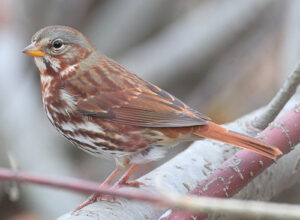 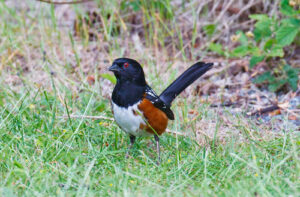 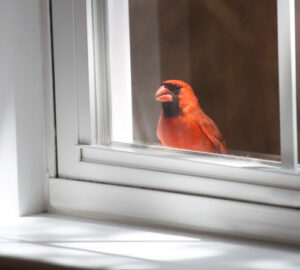 It is this joy, the feeling of revelation that is the essence of seeing live birds, whether for the first time, in some special setting, doing something you have never noticed before, or after a long, long absence. RCC Bird Watch and Wonder co-editor, Bob Musil, has noted his own joy at the rare appearances of a Fox Sparrow or a Rufous-sided Towhee jumping backwards in the leaf litter left beneath an azalea in his yard. He was even moved to reflect on his love for the common cardinal when one hopped off his small, stone St. Francis feeder onto his kitchen windowsill and peered through the glass as if to offer thanks. 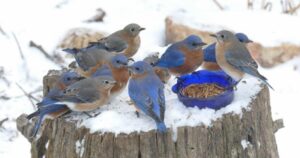 Bluebirds may be giving thanks, too, as they gathered for mealworms put out for them by Dale Mangum who sent us this happy group photo from Patuxent, Maryland. Bird watchers, of course, also note the numbers of birds they see at Christmas and other collective counts that are a key part of citizen science. We report the most interesting and important findings here, along with the arrivals of migrating birds tracked at places like Hummingbird Central, or your own observations of the first junco or whitethroat of winter, or the first Red-winged Blackbird or robin of spring. The mass arrival of some species also marks seasonal celebrations like those of the return of Turkey vultures to Hinckley, Ohio.

Sometimes the wonder of birds comes from hearing them, whether you can identify the sound or not. Rachel Carson is best known for her exposé of the chemical industry in Silent Spring. But it is the loss of bird song that gives the book its title and its power. “On the mornings that had once throbbed with the dawn chorus of robins, catbirds, doves, jays, wrens, and scores of other bird voices there was now no sound; only silence lay over the fields and woods and marsh.”

Whether it is this wren you can hear that was part of Rachel Carson’s “dawn chorus,” a report or photo from you, from one of our followers across the nation, or a rare glimpse of a Painted Bunting in Maryland, you will find it here.

We think you will agree with Olive Thorne Miller, that each sighting, each finding, will be a true joy, a true discovery.

The Latest on Bird Findings