What Would Rachel Carson Say About “Regenerative Agriculture?”

“We stand now where two roads diverge. But unlike the roads in Robert Frost’s familiar poem, they are not equally fair. The road we have long been traveling is deceptively easy, a smooth superhighway on which we progress with great speed, but at its end lies disaster. The other fork of the road — the one less traveled by — offers our last, our only chance to reach a destination that assures the preservation of the earth.” 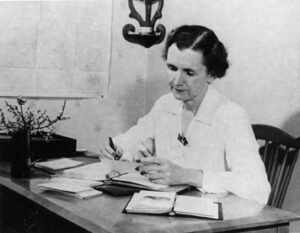 Rachel Carson’s ability to invite curiosity and compassion from others through her writing makes her ideas more compelling, her arguments more convincing. In writing Silent Spring, Carson knew that if she were to make a real difference, she needed to ignite debate that included people not previously interested or concerned. She understood the public’s indifference and unwillingness to look at unpleasant realities. To address this, she was always strategic in presenting her arguments, ensuring that there was no way for industry, or their allies, to attack her facts. But her passion for protecting the environment and human health seeps through her pages and into her reader’s hearts, past their biases, reservations, and political alliances. 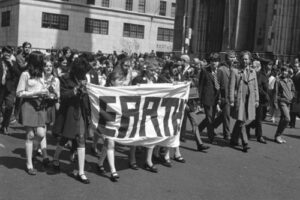 Readers are reminded of the beauties of nature and informed of the chemical attacks they are enduring, especially in the opening of Silent Spring. “A Fable” depicts a bucolic, small town America, silent and ruined by DDT. Carson’s devotion to delivering the truth with hard, scientific evidence, yet in a way that communicates to the feelings of her readers, is inspiring; her extensive research and the lyricism of her lines have each stood the test of time. Environmental activism inspired Silent Spring, but it was also undoubtedly instrumental in propelling the modern American environmental movement with its simplicity and infectious agency.

One of Rachel Carson’s fundamental themes is the interconnectedness of mankind and nature. Carson explains that humans are often too focused on controlling nature, yet there is “little awareness that man is a part of nature.” This “control of nature” that informs the use and production of modern technology is substantiated by the belief that nature exists to serve man’s needs. But Carson contended that such arrogant anthropocentrism, the idea that humans are above nature – will inevitably lead to the destruction of humanity, as the conquest of nature is the conquest of all living things, including we humans. She aimed to help people develop humility and wonder through her depictions of the natural world. Her words were intended to redirect readers away from the lust for exploitation to break man’s self-destructive behavior. As Rachel Carson believed:

“The more clearly we can focus our attention on the wonders and realities of the universe about us, the less taste we shall have for destruction.”

With this principle driving her work, Carson acknowledged that economic and social realities must inform conservation. For example, feeding a growing population requires land and resources. Still, ecological solutions can limit environmental devastation. Ecological solutions are those inspired by natural phenomena and make ecological services for man more efficient –without the need for toxic or destructive methods. For example, an alternative to pesticides could be the use of sex attractants that can lure pests into traps. Pest control does not require the use of chemicals that kill and contaminate more than the intended species group. Rachel Carson presented these alternatives decades ago, believing that science inspired by nature could benefit humans and the natural world. And yet, despite these options, today’s prevailing farming techniques rely heavily on nutrient-heavy fertilizers and toxic pesticides to meet the food industry’s demands.

Pesticides and fertilizers will only lead to further reliance on these synthetic “solutions” because these practices reinforce the climate factors that affect crop yields. Moreover, they will harm other ecological systems, pushing whole species into extinction. Clearly, the conventional agriculture industry demonstrates the cycle of destruction Rachel Carson described 60 years ago. 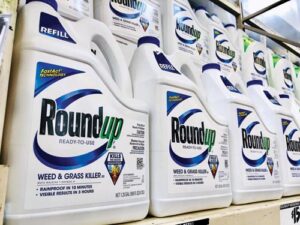 As the global population grows, so does the demand for food. It is expected that global food demand will grow between 59-98% by 2050. This may mean that more land will be converted into industrial farms to produce commodity crops. However, expanding agriculturally viable land destroys ecosystems, increases deforestation and contributes to habitat fragmentation. Further, these effects will likely significantly affect the Global South as higher-income countries buy up their land and outsource agriculture. It may also result in increased water pollution due to fertilizer and manure runoff which makes its way into bodies of water and aquatic ecosystems. Eutrophication, the excess nutrients in the water that may result from agricultural runoff, can cause an algae bloom. Algae blooms reduce oxygen in the water, effectively killing aquatic plants and animal life. Pesticides, like Chlorpyrifos, better known as RoundUp, will lead to further water and air contamination near and far from their source. As Carson demonstrated in 1962, pesticides will make their way through the food chain as an indiscriminate biocide.

Furthermore, chemical-based agriculture can result in extreme soil erosion and desertification. As Carson poetically described, the realms of soil that support micro-ecosystems full of microbes and bacteria produce mineral nutrition for healthy plant growth. Soil is critical in carbon sequestration, as healthy soil can store excess carbon from the atmosphere. Unfortunately, industrial farming techniques, like tilling and monocropping, can damage the topsoil so extensively that the land must rely on fertilizer for its cultivation. Using fertilizer further decreases soil microbiological diversity, degrading the soil. Degraded soil is less resilient to extreme weather events, including droughts and floods, and can lead to air and water pollution as the topsoil, along with the fertilizer and pesticides, is blown away or into waterways. Eventually, eroding land can no longer be cultivated; it will be abandoned. 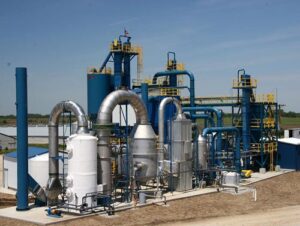 Suppose we continue to use this standard of farming to meet the food demands of a growing global population. We will inevitably despoil the earth for the future generations we were planning to feed. Conventional agricultural practices, especially poor soil management, accelerate global warming and create unstable climates, which, in turn, will impact crop yield and all life on earth. For example, the production, transportation, and application of both pesticides and fertilizers release greenhouse gases linked to rising global temperature levels. Eroding soil can also become a carbon source as microbial decomposition increases, releasing sequestered carbon back into the atmosphere. The unfortunate reality is such farming is unsustainable and generates a self-destructive cycle. How can we break this cycle and still meet the demands of a growing population? 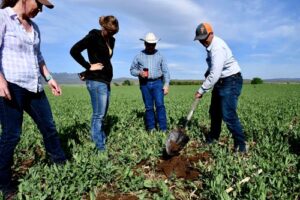 Developing a regenerative model in agriculture will make crops more resilient to climate changes (like droughts and floods), increase biodiversity, improve air quality, and produce less waste. Regenerative agriculture “feeds itself.” It ensures that farmers can grow their crops without damaging the soil, contaminating water and air with pesticides and fertilizers, or removing biodiversity, including vital microbiological diversity that promotes soil health. Furthermore, waste products are recycled and reused to propel production, creating a sustainable cycle of production that “feeds itself” while feeding people around the world.

Regenerative agriculture is a model of agriculture that prioritizes soil health to improve crop yield. It achieves this by adopting several agricultural techniques, including no-tilling extraction. Tilling is used to plant seeds, but heavy machinery used for tilling causes soil compaction and disturbs the soil structure. Non-tilling machinery slices the ground to plant seeds instead of digging and turning the soil. It is also less costly and labor-intensive. Further, the wheels can have high flotation tracks and tires to reduce soil compaction. One company using a harvesting technique like no-tilling is the Balbo Group, located in Brazil. Instead of disrupting the soil when harvesting sugarcane, they use a method called Ecosystem Revitalization Agriculture that returns 20 tons of previously unused organic material into the ground to promote soil health. Furthermore, they use Vinasse, organic waste produced during processing, as a natural fertilizer.

When used together, organic pest control practices maximize the crop yield and protect the services and health of the soil and the organisms that rely upon it, including humans. Organic pest control can take many forms, including introducing native predators, native species for crop cover, and crop rotation. These also improve the fertility of the soil. If we want to sustain crop cultivation and meet rising food demands, adopting organic pest control and greener fertilizing methods is our only option. It will reduce pest interference and promote higher crop yield, but not at the cost of nature.

The issue is that a transition towards a sustainable agricultural industry will take time and can initially be costly. To provide education programs for farmers, buy new machinery, and rebuild soil while supplying the food industry places an impractical burden on farmers. A transition through phases is required, along with the support of companies, politicians, and consumers alike. Although it may seem initially unattainable, a regenerative transition is viable. For instance, São Paulo is investing in “Connect the Dots,” a program that incentivizes regenerative agriculture and supports vulnerable communities. The municipality buys produce from local farmers above market value to encourage regenerative farming methods. They use this food to feed lower-income households and also provide farmers with educational, financial, and technical assistance. This transition is costly, approximately totaling US$2.5M. However, industrial harm is estimated to cost about US$3 Trillion a year, excluding the externalized costs for treating contaminated water or the medical bills that are a result of industrial farming.

Changing our food system is essential in securing a sustainable future for growing populations and the world that feeds them. It is also the only option that farmers have, as current agricultural practices will destroy the health of the environment and any possibility of sustaining human life.

Carson claims that this cycle of destruction is fueled by ignorance and indifference towards science. Her literary legacy illustrates the destructive power of human behavior, driven by mindlessness and anthropocentrism, that will lead to man’s death. Rachel Carson called for action 60 years ago, but it is never too late to change directions and reach a destination that assures the preservation of the earth.

Lily Samuels is a sophomore at Duke University, intending to double major in Environmental Science & Policy and Economics with a minor in Computer Science.