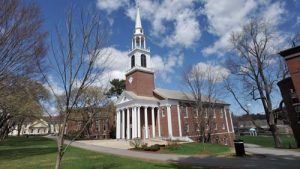 Earth Day 2019 at Wheaton College in Norton, Massachusetts featured a campus-wide lecture by RCC President Dr. Bob Musil. Musil was invited by Provost Renée White who is a strong supporter of sustainability and social justice at Wheaton. In fact, Wheaton students will end the semester on another high note with a powerful Commencement Address by the Rev. William Barber II, founder of the Moral Monday Movement and co-chair of the Poor People’s Campaign. The Poor People’s Campaign has collaborated with the Rachel Carson Council in its North Carolina environmental justice organizing.

In his address to Wheaton College, Dr. Musil stressed the importance of students and faculty choosing to speak out and act on climate change and environmental justice in the political sphere. They can do so, he said, despite being located in one of the most liberal states and districts in the nation whose Congressional delegation includes Senators Elizabeth Warren and Ed Markey and Representative Joe Kennedy III. All are deeply committed to battling climate change. Senator Markey, in fact, is the Senate sponsor of the Green New Deal Resolution and heads the Senate Climate Change Task Force with Sen. Sheldon Whitehouse of Rhode Island.

Climate leaders like Markey, who hosted the largest citizen’s lobby gathering alongside Musil during the Nuclear Freeze of the 1980s, are under constant attack from the right and even, at times, from members of the mainstream environmental community who fear the call for addressing income and justice issues along with climate and the environment will turn off moderates. Active students, Musil said, can show and spread support for far-ranging climate measures. They can also gain access to Massachusetts representatives and their key staffers who have a direct hand in shaping what kinds of climate bills actually get introduced and passed.

Massachusetts has always lead the nation, Musil told his Wheaton audience. He cited a long tradition of Bay State environmentalists from Henry David Thoreau to Ellen Swallow Richards, the first female professor at MIT and the leader of the nation’s first water quality sampling and legislation for clean water in the 1870s. Musil also included Dr. Alice Hamilton, the first female professor at Harvard, who, starting in the Progressive Era, led decades-long fights against lead, mercury, and other toxics that harm the public and workers, to Rachel Carson who studied marine biology and got her love of the ocean at the Woods Hole Biological Laboratory on Cape Cod.

But it is Rachel Carson’s environmental ethic that drives the work of the Rachel Carson Council today, Musil said. Carson believed in a combination of wonder, imagination and empathy for all creatures – along with impeccable science. Carson also had a sense of justice that sees the inequities in the adverse environmental exposures, along with lack of income and access to power, that characterizes poor communities of color today. Carson’s good friend and literary agent, Marie Rodell, brought Martin Luther King’s first book, Stride Toward Freedom, to publication, and was typical of the political milieu in which Carson’s views were shaped.

Carson also saw in her lifetime the connection between environmental issues including factory farms, climate change, nuclear testing, the destruction of forests, and the widespread use of toxic chemicals. That is why the RCC focuses on these issues today and hopes to engage the next generation of Rachel Carsons currently on campus with its new Rachel Carson Campus Fellows Program and its fall 2019 Capitol Hill Days planned for October

Musil called on students, staff, faculty and administrators alike at Wheaton to rise to Carson’s challenge in her only Commencement Address to the Scripps College for Women in 1962. “Your generation must face the environment,“ Musil quoted Carson as saying. But, he added, her call was addressed to my generation — and that was two generations ago. “Now with climate change, the time to act is very short. I call on you tonight to join with me, and the Rachel Carson Council, and all those concerned with the fate of the earth — before it is too late.”

In addition to his speech, Dr. Musil also taught classes on the physics of climate change where he observed the project of students under Dr. Jason Goodman to design a plan for reducing carbon emissions that would keep the Earth’s temperature from rising more than 2 C. while being agreed to by the nations of the Paris Climate Agreement. Musil also met with the ornithology course of Dr. Jessie Knowlton where he discussed what students in upper division courses on the environment could do with their environmental degrees after graduation.

Musil also met with students from the Farm House and ECCO House two of the main student environmental organizations on campus, as well as interested faculty and administrators about expanding sustainability at Wheaton. After President Bob Musil’s Earth Week visit, Wheaton College became the 53rd college to join the Rachel Carson Campus Network.