Pushing Plastic: Who Is Responsible? 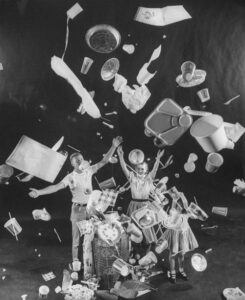 In August of 1955, LIFE magazine featured a short article called “Throwaway Living.” It was accompanied by a large, black and white photograph of an American family joyously hurling a symphony of Styrofoam, paper, and plastic plates, cups, straws, utensils, napkins, and serving trays into the air.

The piece emphasized the luxury of this throwaway life for housewives who could now shortcut their kitchen cleaning routine. Use it, then toss it, and it takes care of itself! I imagine that after this photoshoot, the LIFE magazine staff threw away the assortment of kitchen disposables without food ever touching them. This happy fifties family captures the reckless abandon with which companies have pushed a pervasive, plastic American culture. As a direct result we’ve plasticized our environment nearly to the point of no return.

Not only does plastic kill at least 100,000 marine mammals each year, it’s probably killing humans too. New studies suggest that ¼ of the 10,000 chemicals identified in consumer plastic products are toxic to humans, and we’re directly consuming these chemicals in the form of microplastics. On average, Americans consume a credit card worth of plastic every week largely because 94% of water samples in US cities are contaminated with microplastics.

Even these facts fail to fully convey the dire nature of the plastic problem. But here is the strange thing about the issue of plastic pollution: the solution is straightforward, and alternatives are readily available. We’ve only been using commercial plastic for the last seventy years at most, and information about the negative impacts from production is widely known. All of these characteristics would point to a quick fix (relative of course to the scale of decarbonizing our energy grid, reinvigorating global biodiversity, or stopping sea level rise.) But the simplicity and visibility of the issue has not yet been matched by widespread advocacy to hold corporations accountable and make a clean break from plastic usage.

Back in the 1990s, scientists identified the negative environmental implications of the surge of plastic production. By the 2000’s, American public-awareness around the issue was substantial. Millions of people saw pictures of sea turtles strangled by plastic six-pack rings. I even remember seeing these images as a child in elementary school in the early 2000s. That’s a PR nightmare if you’re Coca-Cola (which is still burning or dumping 240,500 tons of plastic waste each year). Then reusable water bottles, metal straws, biodegradable utensils, canvas grocery bags, and other plastic alternatives not only became readily available on the market, they became incredibly popular. If you start a job at a new company, chances are there’s a company-branded reusable water bottle and coffee mug waiting for you at your desk. Metal straws are now sold in fashionable carrying cases for on-the-go sipping emergencies. You can’t walk into a Trader Joes, Whole Foods, or even Kroger without seeing a wall covered in colorful grocery tote bags. 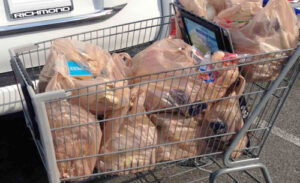 Yet in 2021, chances are you’re filling those grocery totes to the brim with produce, proteins, and pastries wrapped in plastic. Picture this: you pick up an apple from an open bin in the grocery store, throw it in a plastic produce bag, put the plastic bag into a reusable or paper bag at checkout, and when you get home, take it out of the plastic bag to set it in a bowl on your countertop to wash it before eating. So why is that plastic produce bag necessary? Short answer, it’s not. So how did our wasteful ways come to fruition?

Fossil fuel and petrochemical companies have been overproducing plastic for the public at staggering rates. They singlehandedly control the supply and the demand. Retail companies from Walmart to Starbucks to locally owned restaurants have to face market pressures from anti-plastic public opinion and government policies like bag-bans. As of 2019, more than two-thirds of American consumers would rather pay more for their goods to avoid unnecessary plastic. This is forcing retailers to offer more plastic-free options and invest in sustainable alternatives for the near future. Nevertheless, further up the supply chain, fossil fuel companies continue to produce more plastic than ever before. Present estimates project global plastic production to top 590 million metric tons by 2050, up from 400 million produced in 2020. While fueling the plastic crisis against the will of the public, Big Oil and Gas have strategically kept their names out of the spotlight, hiding behind generalist petrochemical company names that sound nothing like Exxon, Chevron, or BP. They have also steadily misled the public that most plastic is effectively recycled. It is not.

But these PR schemes are not the most scandalous tactic employed by the oil and gas industry to cover up their plastic guilt. The petrochemical plants they own, operate, and associate with are strategically placed far from the affluent consumer centers that use their products. Yet they have devastating human and environmental health impacts on surrounding communities. Setting aside the catastrophic methane emissions produced from extracting ethane, petrochemical plants that turn ethane into ethylene (the building block for all plastics) have measurably fatal health impacts on their surrounding communities, most of which are low-income communities with a majority of people of color.

Such communities, stretching from Texas to Louisiana, are now known as Cancer Alley. In St. Gabriel, Louisiana, “out of every 10 houses, there’s a prospect of one or two people that have died of cancer.” St. Gabriel has 30 petrochemical plants (including Formosa’s mega complex in St. James) within a 10-mile radius of the town. While Louisiana environmental quality officials and even the EPA will not directly link these chemical plants to their health impacts, they also do not regularly monitor the air quality near them. Nevertheless, frontline communities witness excessive cancer rates while state and federal officials continue to give the green light for the expansion of petrochemical production.

Fossil fuel and petrochemical companies have been hard at work convincing the public that the plastic pollution crisis can be fixed by individual actions like beach clean ups and using overpriced metal straws. Do I still take my metal straws with me to stay hydrated while doing beach clean ups? Yes. I do not mean to demonize individual actions taken to reduce plastic waste. But it is big corporations that are to blame for the crisis we find ourselves in. They have used plastic to inject fossil fuels into nearly every aspect of daily life to the point where consumers can’t reasonably break free. We need strong federal laws that enforce corporate responsibility for plastic waste and protect human and environmental health. We must stop the production of needless consumer plastic before it can become waste that poisons our environment for centuries to come.

Audrey Magnuson co-leads RCC’s Coasts and Ocean program and works on environmental justice and policy. She is a senior at Duke University majoring in Public Policy with minors in Environmental Science and Art History. [email protected]