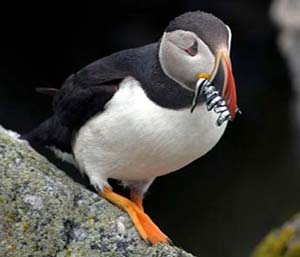 Is the Recovering America’s Wildlife Act ready for climate action? 08-31-22

The United States recognizes eight trees as endangered or threatened. New research suggests that number should be over 100. Read more

From warbling loons to chirping toads, rising temperatures threaten some of the Earth’s most iconic sounds. Read more

Knowing that the charismatic cetaceans express joy, compassion, and other “human” emotions can inform and inspire our own climate work. Read more

A long-buried creek that fed a golf course irrigation pond will be uncovered and allowed to flow through the former back nine holes, now called Larsen Meadow. Read more

The Trump administration’s definition was at odds with the conservation purposes of the Endangered Species Act, wildlife officials said. Read more

When you think of the New York Harbor, you might imagine boats, skyscrapers, a noisy traffic on the nearby streets of NYC. What you may not expect to find are dolphins. Read more

What do we know about baby dolphins living in the Potomac River? 06-06-22

Monday, May 23, is World Turtle Day, established in 1990 by the American Tortoise Rescue based in California to “shellebrate” and protect all species of turtles and tortoises. Read more

The roads and highways humans have built bisect the natural environment and divide the ranges and migratory routes of many species, presenting a danger to the animals who need to cross them. Read more

Data show alarming declines in wildlife but also point to ways to save it. Read more

In the past half century, North America has lost a fourth of its birds. Earth is now a coalmine, and every wild bird is a canary. Read more

Bird banding, as practiced here at Foreman’s Branch Bird Observatory on the upper Eastern Shore, has been around for more than a century, but scientific inquiry into the mysterious ways of birds is more important than ever. Read more

This Wonder Bird Flies Thousands of Miles, Non-Stop, as Part of an Epic Migration 01-05-22

We saved the puffins. Now a warming planet is unraveling that work. 01-04-22

“Seabirds are climate change prisoners. Our inaction makes us the executioners.” Read more