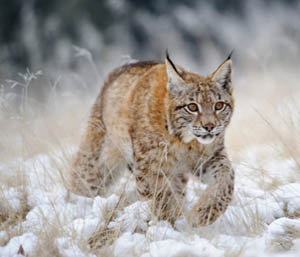 One kind of “gun” control that many south Carolinians seem to agree on — stopping the use of seismic airguns to search for oil and gas deposits in the Atlantic ocean. Read more at Grist

The Trump administration on Thursday detailed its plan to open nine million acres to drilling and mining by stripping away protections for the sage grouse, an imperiled ground-nesting bird. Read more at The New York Times

“Cyanide traps are indiscriminate killers that just can’t be used safely,” said Collette Adkins, an attorney and biologist at the Center for Biological Diversity. Read more at EcoWatch

According to a much-publicized and much-lamented recent estimate of humanity’s toll on our warm-blooded kin, it will take several million for evolution to generate as many new mammal species as we’ve driven extinct. Read more at Anthropocene

Thousands of scientists have signed two letters opposing changes to the Endangered Species Act proposed by the Trump administration that critics say would weaken protections in favor of developers, Reuters reported Monday. Read more at EcoWatch

2018 has not been a good year for Florida’s iconic manatees. A total of 540 sea cows have died in the last eight months, surpassing last year’s total of 538 deaths. Read more at EcoWatch

Among the many quirks of human nature, one that has always struck me as particularly worthwhile is the tendency to project our own feelings onto other animals. This seems to me like a fast route to empathy, a way to bring us closer to different species. But many scientists disagree. They call this anthropomorphism, and they discourage it. Read more at The New York Times

Republican-led changes to the Endangered Species Act put plants and animals across America at risk. Here are the ones you should be most concerned about

Republicans in the western United States have been trying to whittle away the Endangered Species Act (ESA) since Donald Trump took office, and their efforts reached a crescendo last week with help from the White House. Read more at The Guardian

A week after House Republicans announced legislation intended to weaken the Endangered Species Act (ESA), the Trump administration joined the attack with a proposal environmentalists say would favor developers over vulnerable plant and animal species. Read more at EcoWatch

Fifty-six years after Rachel Carson’s “Silent Spring” warned of bird die-offs from pesticides, a new biocrisis may be emerging. Read more at The New York Times

Limiting global warming to 2 degrees and not the more ambitious 1.5 degrees would put far more species at risk of extinction. Insects are especially vulnerable. Read more at Inside Climate News

This year is the 100th anniversary of one of the oldest conservation laws in the country.

The 1918 Migratory Bird Treaty Act — which originally was the result of a pact between the United States and the king of England (back when the British monarch represented Canada) — makes it illegal to “hunt,” “pursue,” “capture” or “kill” any migratory bird without a waiver. Read more at The Washington Post

Urban Darwinism: How Species Are Evolving to Survive in Cities 04-05-18

In urban areas, the forces of rapid natural selection are leading to striking genetic changes in animals. Dutch biologist Menno Schilthuizen talks to Yale e360 about the transformations seen in creatures ranging from mice in Central Park to anole lizards in Puerto Rico. Read more at Yale Environment 360

North Atlantic Right Whales Are Near Extinction. We Can Avert It. 03-07-18

One young whale that had become entangled in fishing lines was found dead in January off Virginia. Worse, not a single newborn has yet been spotted by scientists flying over the whale’s calving grounds off Florida and Georgia. Read more at The New York Times

In Defense of Biodiversity: Why Protecting Species from Extinction Matters 02-12-18

A few years ago, I helped lead a ship-based expedition along south Alaska during which several scientists and noted artists documented and made art from the voluminous plastic trash that washes ashore even there. Read more at Yale Environment 360

Donald Trump and his Republican allies are turning over every element of our government and governance to lobbyists and big industry. A Big Pharma executive put in charge of Health and Human Services, an anti-public school billionaire crusader in charge of the nation’s public schools and on and on. Read more at Daily Kos

The number of monarchs wintering in California has dropped to a five-year low, despite more volunteers counting more sites in search of the orange-and-black insect that is arguably the most admired of North American butterflies, a report said on Friday. Read more at Reuters

The wolverine is highly adapted to life in a snowy world. It has thick fur and snowshoe-like feet, and it dens high in the mountains as a way to avoid predators that aren’t as nimble in deep snow and to provide its kits with insulation from the bitter high-elevation cold. Read more at Yale Environment 360

In 1977, two years after declaring independence from Portugal, Mozambique erupted into civil war. Over the next 15 years, the violent conflict claimed at least a million lives—and that was just the humans. Read more at The Atlantic

The Endangered Species Act (ESA) has been one of the most effective tools used to protect America’s perilously declining wildlife and has helped prevent the extinction of 99 percent of the species under its protection. Read more at Center for American Progress

Habitat on the Edges: Making Room for Wildlife in an Urbanized World 01-03-18

One morning not long ago, in the southern Indian state of Karnataka, I traveled with a Wildlife Conservation Society biologist on a switchback route up and over the high ridge of the Western Ghats. Read more at Yale Environment 360