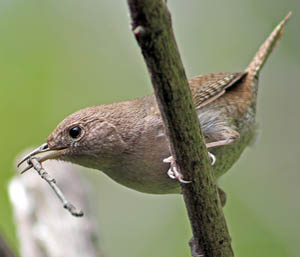 It’s been only two years since the removal of the last of the dams that obstructed the Elwha River, in Washington State, but already species are returning. Read more on The New Yorker

The green volcanic hills that tower above Apútzio de Juárez have begun to fill with swarms of monarch butterflies, which return each year for the winter stretch of their celebrated — and imperiled — migration. Read more on The New York Times

During a recent early morning walk along the shores of Bogue Banks, the spreading rays of the rising sun pushed the remaining darkness below the horizon and released a brilliant blue sky. A restless cool northwest wind had all the beach grasses, little blue stem, sea oats and the dune shrub branches of yaupon and wax myrtle dancing and swinging. Read more on Coastal Review

The U.S. Fish and Wildlife Service announced Monday it will begin to dramatically scale back its controversial red wolf recovery program.

The agency said in a news release it will begin implementing a series of actions based on scientific information and divided public opinions gathered during the past 21 months. The plan is to limit the area that the endangered wolves are able to roam freely to a federal wildlife refuge and adjacent land in Dare County by the end of 2017. Read more on Coastal Review Online

As the National Park Service marks its centennial this month, the parks are being celebrated for their natural beauty and priceless recreational opportunities. But they also provide a less recognized benefit: the parks serve as a living laboratory for critical scientific research. Read more on YALE environment 360

President Obama marked the 100th anniversary of the founding of the National Park Service a day early by protecting 87,500 acres in north-central Maine on Wednesday. Read more on Grist

Are they singing The Heat is On? When it’s hot outside, zebra finches sing a special song to their eggs.

That song appears to keep the chicks from growing too large after they hatch if the weather is toasty – and it even affects the number of baby birds in the next generation, though researchers aren’t sure exactly why. Read more on New Scientist

A group of elephant seals in Antarctica has helped show how freshwater from melting ice shelves affects a key part of the engine that drives the circulation of the world’s oceans. Read more on Australian Broadcasting Corporation

Charles Darwin once mused on the impacts that predators could have on the landscapes around them. In particular, he wondered – in On the Origin of Species – how neighbourhood cats might affect the abundance of flowers in the fields near his house at Downe in Kent. He concluded the animals’ potential to change local flora was considerable. Read more on The Guardian