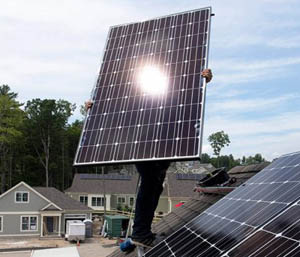 Inside Clean Energy: The Solar Boom Arrives in Ohio 12-17-20

Overwhelming demand is turning the state into a solar hotbed, despite a decade of policies hostile toward renewables. Read more at Inside Climate News

The fund will divest from many fossil fuels in the next five years and sell its shares in other companies that contribute to global warming by 2040. Read more at The New York Times

While natural gas has been touted as a solution to the world’s fossil fuel problem, a new analysis by NRDC shows that the U.S’ exports of liquified natural gas (LNG) will only worsen global warming. Read more at Our Daily Planet

The city of San Jose, CA will become the largest city in the United States to ban natural gas from all new construction. Read more at Our Daily Planet

The District has pledged to see that 100% of electricity sold in the city will come from renewable sources by 2050, with 10% of that coming from solar. Currently, solar provides just 1% to 2% of the District’s power.Read more at Bay Journal

Arturo Massol-Deyá believes solar panels will bring power to the people of Puerto Rico — in more ways than one. Read more at Grist

In January 2018, President Donald Trump slapped tariffs on imported solar panels despite protests from much of the industry, sending jobs in one of the nation’s fastest-growing employment engines tumbling for the following two years. Read more at Grist

Bob Marshall: Louisiana will still be an energy state even without oil. Here’s why. 11-15-20

This new economy will be a state-directed initiative to develop the huge wind energy potential offering tens of thousands of jobs. Read more at The New Orleans Advocate

Inside Clean Energy: Not a Great Election Year for Renewable Energy, but There’s Reason for Optimism 11-05-20

The pandemic and the presidential race were, as one advocate put it, the “giant elephants in your face.” Read more at Inside Climate News

How the U.S. could go from climate laggard to climate leader — in 8 simple steps. Read more at Grist

The Largest Solar Array Of Its Kind In The U.S. Now Sits Atop A Former Pittsburgh Steel Mill 08-24-20

Renewables didn’t cause California’s blackouts. So what did? 08-20-20

Energy grids are straining under the weight of millions of air conditioners as heat has engulfed the western United States. In California, which might have just recorded the highest temperature ever on earth, the strain was too much last weekend. Read more at Grist

House Democrats are trying to throw a lifeline to wind and solar developers struck hard by the coronavirus pandemic. Read more at The Washington Post

New Jersey aims to lead nation in offshore wind. So it’s building the biggest turbine port in the country. 06-16-20

Gov. Phil Murphy (D) said his state will build the country’s first port dedicated to assembling the turbines that will go up not just in New Jersey but across the Eastern Seaboard. Read more at The Washington Post

A $1 million investment in energy efficiency creates around eight full-time jobs, nearly three times as many as an investment in fossil fuels. Read more at Fast Company

Renewable energy in the U.S. has beaten coal as the country’s leading electricity source for a record 40 days. Read more at EcoWatch

As energy companies of every stripe cope with the novel coronavirus distress, there’s one small segment that has a compelling pitch: solar power at home, no visit required. Read more at E&E News

Gina Mathias has what many would consider a dream job. Read more at The Christian Science Monitor

Inside Clean Energy: 7 Questions (and Answers) About How Covid-19 is Affecting the Clean Energy Transition 04-02-20

From EV sales to the solar market to states’ commitments to clean energy, the coronavirus pandemic is turning everything on its head. Read more at Inside Climate News

The amount of energy generated by tides and waves in the last decade has increased tenfold. Now governments around the world are planning to scale up these ventures to tap into the oceans‘ vast store of blue energy. Read more at EcoWatch

Solar power has been growing for decades. Then coronavirus rocked the market. 03-16-20

As the coronavirus outbreak rages on, renewable energy is taking a hit. Factory shutdowns in China have disrupted global supply chains for wind turbines and solar panels, with consequences for clean energy progress this year around the world. Read more at Grist

Does This Tiny Island Off the Coast of Maine Hold the Answer to the Future of Electricity? 03-10-20

Integrating time-tested technology with emerging innovations, remote Isle au Haut could be a renewable energy model for the rest of the world. Read more at Ensia

As The World Turns To Solar Power, Black Chicagoans Jump On The Bandwagon 03-08-20

When Cheryl Johnson was a child, her mother would cover the kitchen table with index cards showing all the people who had died in Altgeld Gardens, their Chicago public housing complex. Read more at Forbes

Virtually all the world’s demand for electricity to run transport and to heat and cool homes and offices, as well as to provide the power demanded by industry, could be met by renewable energy by mid-century. Read more at EcoWatch