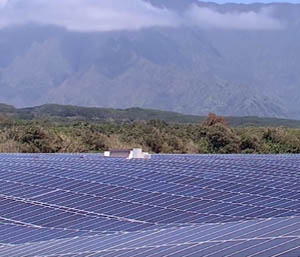 No land, no problem. Floating solar panels might be the next big thing. 12-02-19

A blue lagoon sits outside of Sayreville, New Jersey, inside a lush preserve of spruce, maple, and oak trees. The 35-acre basin holds some of the town’s water supply, which requires enormous amounts of electricity to pump and treat. Read more at Grist

The Trump administration has promised to expand their use, which would make farmers happy. But are consumers aware of biofuels’ potential consequences? Read more at The Revelator

The world just got its energy report card … and at best, its grades are mixed. Every year, the International Energy Agency releases a mammoth report detailing the world’s progress toward providing clean energy to all. Read more at Grist

New modeling shows the state can decarbonize — at a savings. Of all the states in the US, Colorado may be the best prepared for a genuine, large-scale energy transition. Read more at Vox

Offshore Wind Energy Could Generate Enough Electricity to Power the World. Will the U.S. Get on Board? 10-30-19

The International Energy Agency predicted offshore wind will be a $1 trillion industry by 2040. Read more at Rolling Stone

From the Rooftops, Big Box Stores Are Embracing Solar 10-07-19

Target and Walmart are trying to out-green each other in proving to customers they are environmentally responsible businesses. Read more at The New York Times

Global renewable energy has quadrupled over past decade 09-06-19

With solar leading the way, clean energy capacity growth is helping the planet avoid billions of tons of carbon dioxide emissions each year. Read more at The Daily Climate

The apartment complex rising on the southwestern edge of Salt Lake County looks like any other forming on empty lots, former farmland and razed scrub oak seemingly everywhere in Utah. Read more at The Salt Lake Tribune

If California is to meet its goal of running on 100-percent clean electricity by 2045, fields that once grew hay are going to have to start producing electrons. Read more at Grist

n a remarkable sign of the shifting fortunes of dirty energy and clean energy, more renewable power was generated in April than coal power — something that’s never happened before in the United States. Read more at Think Progress

The Pilgrim nuclear plant in Massachusetts will shut down, a victim of rising costs and a technology that is struggling to remain economically viable in the United States. Read more at Wired

Millions of Americans lack access to solar energy because they cannot afford the steep upfront costs. Now, more than a dozen states are adopting “community solar” programs that are bringing solar power and lower energy bills to low-income households from New York to California. Read more at Yale Environment 360

They Grew Up Around Fossil Fuels. Now, Their Jobs Are in Renewables. 03-26-19

His Great-Grandfather, Grandfather and Father Mined Coal. He Wants to Replace It. Read more at The New York Times

New Wind and Solar Power Is Cheaper Than Existing Coal in Much of the U.S., Analysis Finds 03-25-19

Coal-fired power plants in the Southeast and Ohio Valley stand out. In all, 74% of coal plants cost more to run than building new wind or solar, analysts found. Read more at EcoWatch

By focusing on renewable energy that is both clean and zero-emission, the Green New Deal reduces, in one fell swoop, energy insecurity due to the fossil fuel and nuclear industries. Read more at Clean Technica

Biomass energy, in the form of wood pellets, is inadvertently making the climate crisis worse. Read more at Vox

Solar power has long been a pet issue for progressives and environmentalists. But in Florida, utilities are starting to embrace the technology for economic reasons. Read more at The Christian Science Monitor

Massachusetts is leading the charge in dual-use solar installations, making it possible to grow some crops and pasture animals while generating clean energy. Read more at Civil Eats

Hawaii has a new, game-changing tool in its renewable energy arsenal. Power producer AES Corporation and the not-for-profit Kaua’i island Utility Cooperative (KIUC) unveiled what’s claimed to be the world’s largest solar-plus-storage peaker on the island of Kauai.