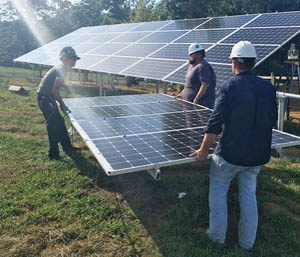 To save the world from climate catastrophe, the world needs to urgently phase out the use of fossil fuels. Read more at EcoWatch

An old coal power station is set to be transformed into a “sustainable village” of 2,000 homes powered by solar panels, in the biggest redevelopment yet of a former UK power plant. Read more at The Guardian

There’s nothing novel about vehicles using alternatives to the internal combustion engine, but solar and battery-powered boats are rarely in the conversation.

Electric vehicles are the talk of the town. Tesla has captured car drivers’ imaginations, delivering the speeds, distances, and style they desire. Battery-powered buses are increasingly in vogue, too. Even major cities—New York being one of the latest—are shifting to all-electric fleets. And the Solar Impulse is making the case for the sun’s might in aviation. Read more at National Geographic

The California State Assembly on Tuesday voted 43-32 on a bill that aims for 100 percent renewable energy by 2045, one of the nation’s toughest clean energy. Read more at EcoWatch

Solar panels could flood sunny Alabama with cheap, clean power. What stands in the way?

Chuck Jay worked as a coal miner for nearly three decades before he decided to start his own solar panel installation company just outside Tuscaloosa, Alabama, in 2012. He had put panels on his own home a few years before and got hooked by the technology — not to mention the money he saved on his electric bill. Read more at Grist

Renewable energy is truly getting cheaper every day. The 800-megawatt wind farm Vineyard Wind project, the first large-scale offshore wind farm in the U.S., has offered a total levelized price of $65 per megawatt-hour (MWh)—a record low. Read more at EcoWatch

In the glory days of the House of Representatives, congressional hearings were a place where ideas were exchanged, where members would call in experts to help them craft legislation in the public interest. Read more at The Intercept

A new survey of Southeast cities also found about half expect to install or buy more renewable energy. West Palm Beach and Atlanta were among the leaders. Read more at Inside Climate News

Beneath some solar arrays, pollinator-friendly plants, fruits, vegetables and forage are cropping up in place of turfgrass or gravel.
At a recent solar energy conference in Minneapolis, attendees unwound at happy hour tasting free pints of a local honey-based India Pale Ale called “Solarama Crush.” Read more at ENSIA

The world’s most powerful wind turbines have been successfully installed at the European Offshore Wind Deployment Centre (EOWDC) off Aberdeen Bay in Scotland’s North Sea. Read more at EcoWatch

Saving customers a few cents would not be worth further damaging the state’s credibility as a business partner.

Will Annapolis landfill’s panels light the way to alternatives for rural farmland sites?

North Carolina’s highest court is taking up a case that could force new competition on the state’s electricity monopolies. Read more at Associated Press

Global investment climbs to $280 billion in 2017—and the economies leading the charge may surprise you. Read more at The Daily Climate

Pending action at the PUC could imperil a 2014 power contract for floating turbines off Monhegan Island that would raise electric bills less than $1 a month. Read more at Press Herald

Jobs and a thriving industry are growing up around the ‘repowering’ of existing wind farms, as technology upgrades increase their renewable energy production.

Old wind farms that have towered over the same fields for more than a decade may be generating more power now than ever before. Read more at Inside Climate News

As a growing number of U.S. cities make pledges towards 100 percent renewables, it’s easy to forget that the entire state of Hawaii set this important benchmark three years ago when it mandated that all of its electricity must come from renewable sources no later than 2045. Read more at EcoWatch

Sustainable Cities Need More Than Parks, Cafes and a Riverwalk 03-15-18

There are many indexes that aim to rank how green cities are. But what does it actually mean for a city to be green or sustainable? Read more at EcoWatch

Solar is booming. Solar power is now cheaper than coal in some parts of the world, and generating power from the sun is likely to be the lowest-cost energy option globally in less than ten years, according to Bloomberg. In many places around the world, solar is already the lowest-cost option. Read more at Green America

“We were left with many unemployed miners,” eighth-grader Nicholas Sturgill said as he and two classmates gave a presentation to a small crowd of students and teachers at an education summit in Pikeville, Kentucky. Read more at Ohio Valley Resource

The Wind Catcher Energy Connection project, which includes a massive 800-turbine wind farm under construction in the Oklahoma panhandle, is getting closer to lift-off. Read more at EcoWatch

If you didn’t already know that Tesla desperately wants you to go solar, there’s a good bet you will soon. Read more at USA Today

Compared with other bus system’s in North America, New York City’s is gigantic. It daily serves over two million passengers across all five boroughs with 5,700 buses, 330 routes, and 16,000 stops, and it operates in a uniquely hostile environment of stop-and-go traffic. The average NYC bus travels only 7.4 miles per hour—one of the slowest bus speeds in the US. Read more at Quartz

The planned investment is significantly higher than the previously announced target of $4.5bn by 2020

Ford Motor Co will significantly increase its planned investments in electric vehicles to $11bn by 2022 and have 40 hybrid and fully electric vehicles in its model line-up, the company’s chairman, Bill Ford, said on Sunday at the Detroit auto show. Read more at The Guardian

The NAACP is launching a major environmental justice campaign on Jan. 13 to mark the Martin Luther King, Jr. Day of Service.

The “Solar Equity Initiative” aims to provide solar job skills training to 100 individuals, install solar panels on more than 30 homes and community centers in low-income neighborhoods and communities of color, and strengthen equity in solar access policies in at least five states. Read more at EcoWatch

Norwegian energy company, Statoil, will send a vessel to survey a triangular slice of federal waters about 15 miles south of Long Island, where the company is planning to construct a wind farm that could generate up to 1.5 gigawatts of electricity for New York City and Long Island. Read more at Yale Environment 360

Oil Giants See a Future in Offshore Wind Power. Their Suppliers Are Investing, Too. 01-11-18

Transporting an offshore wind array from the factory floor to the ocean floor is no easy feat. Giant, specialized marine vessels must carry the blades and turbines—which sit atop rigs hundreds of feet tall—out miles from shore. Read more at Inside Climate News

A train station put the tiny mountain town of West Jefferson, North Carolina on the map.

A century later, some hope electric-vehicle charging stations will help keep it there. Read more at Southeast Energy News