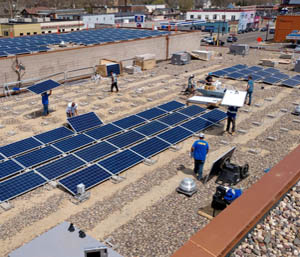 Carbon Loophole: Why Is Wood Burning Counted as Green Energy? 12-19-17

It was once one of Europe’s largest coal-burning power stations. Now, after replacing coal in its boilers with wood pellets shipped from the U.S. South, the Drax Power Station in Britain claims to be the largest carbon-saving project in Europe. Read more at Yale Environment 360

Biogas could clean up manure and mitigate methane; but economics and inconsistent regulations remain hurdles

On a school night in early spring, a rowdy collection of environmental activists, local residents, and Duke University faculty and students packed a public forum, railing against the school’s plan to build a new $55-million gas plant on campus. Read more at Environmental Health News

Senate Republicans rolled out their version of a tax reform bill last week, and unfortunately, it’s working from the same idea as the House version: Slash taxes for the rich and corporationsand attempt to pay for it by increasing the deficit and jacking up effective tax rates on middle-class families. Read more at Salon

Regardless of the environmental and human health benefits of displacing gasoline and diesel combustion with plug-in electrics, thoughtful policymakers and legislators from both sides of the aisle have long understood the importance of EVs when it comes to promoting energy independence and security. Read more at EcoWatch

As the House and Senate develop their respective versions of a tax reform bill, the $7,500 federal electric vehicle(EV) tax credit is positioned to be a potential bargaining chip. The House’s version of the bill, the “Tax Cuts and Jobs Act,” includes a repeal of the EV tax credit. The Senate’s newly introduced version, at the moment, doesn’t kill the credit. Read more at EcoWatch

As the House and Senate develop their respective versions of a tax reform bill, the $7,500 federal electric vehicle (EV) tax credit is positioned to be a potential bargaining chip. The House’s version of the bill, the “Tax Cuts and Jobs Act,” includes a repeal of the EV tax credit. The Senate’s newly introduced version, at the moment, doesn’t kill the credit. Read more at Bloomberg News

Recently-announced coal plant retirements, combined with the planned addition of nearly 4,000 MW of wind by 2018, means wind capacity could exceed coal as soon as next year. Read more at Utility Dive

As the annual solar race across Australia wraps up, a Dutch entry averaged 69kmh from Darwin to Adelaide and resupplied the grid.

A futuristic family car that not only uses the sun as power but supplies energy back to the grid has been hailed as “the future” as the annual World Solar Challenge wrapped up in Australia. Read more at The Guardian

Recently introduced legislation would create a 30% investment tax credit for the first 3 GW of offshore wind projects deployed in the U.S.

When the U.S. was ready to ramp up its solar industry, developers benefited from investments made in Germany, Spain and elsewhere in Europe that had funded gigawatt-scale annual deployments and pushed down costs. The same could happen with offshore wind. Read more at Green Tech Media

Californian scientists said a fossil fuel phase-out is achievable that would contain climate change, deliver energy entirely from wind, water and sunlight to 139 nations, and save up to 7 million lives each year. Read more at EcoWatch

When it comes to sustainability in urban centers, the West Coast is faring better than the rest of the country.

U.S. coastal cities are coming the closest to meeting sustainability goals set by the UN, according to the first analysis of 100 metropolitan cities by the Sustainable Development Solutions Network (SDSN). But no U.S. city has yet managed to reach a score of even half of what is necessary to satisfy the Paris Climate Agreement. Read more at Citylab

The Navajo Nation is transitioning from coal to solar.

The coal-fired Navajo Generating Station is slated to close at the end of 2019, another victim of the boom in cheap natural gas. To fill the energy gap, the Navajo Nation has invested in clean-energy technology, specifically, the Kayenta Solar Project, a 27.3-megawatt farm in northeastern Arizona. Read more at Grist

The high level of confidence that automotive industry leaders have in the future of electric vehicles (EVs) has been on full display recently. A spurt of corporate announcements has been paired with a bevy of statements of international leadership. Read more at EcoWatch

Alongside Highway 401 in northern North Carolina is a 21st-century twist on a classic rural scene. A few miles outside of Roxboro, sheep graze among 5,000 panels at the Person County Solar Park, keeping the grass tidy on the rural installation. Read more at EcoWatch

One of the most common questions I’m asked about electric cars is, “how clean are they?” Read more at Union of Concerned Scientists

The Oklahoman recently took a look at what the Sooner State’s growing wind industry has meant for rural school districts. Its findings: Wind power has made a big difference. Read more at EcoWatch

7-Eleven, Inc. will energize 425 stories in Texas with wind energy it will buy from TXU Energy. This initiative is expected to reduce 7-Eleven’s carbon footprint by 6.7 percent and reduce operating costs. Read more on EcoWatch

Green energy in a coal state: the struggle to bring solar jobs to West Virginia 03-19-17

Local entrepreneurs want to replace disappearing coal jobs with employment in solar – but that’s a tough move in a state that lacks the solar-friendly regulations of places like California. Read more at The Guardian

Elon Musk’s Master Plan to accelerate the world’s transition to sustainable energy is becoming reality. Tesla and Panasonic have officially kicked off the mass production of lithium-ion battery cells at the massive Gigafactory outside Sparks, Nevada. Read more on EcoWatch