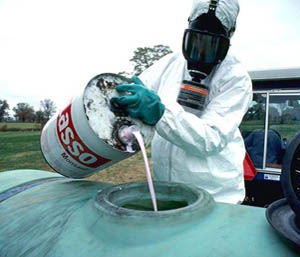 People Exposed to PFAs Criticize EPA Action Plan as Too Little, Too Late 10-19-21

Community advocates and environmental groups pointed out that the EPA has promised action on toxic PFAS pollution for many years. Read more

“We already know enough about the harm being caused by these very persistent substances to take action to stop all non-essential uses and to limit exposure from legacy contamination.” Read more

The compounds can form PFAS, also known as “forever chemicals,” which have been linked to cancer and birth defects. The E.P.A. approvals came despite the agency’s own concerns about toxicity. Read more

After a federal judge rejected a $2 billion class-action proposal from Bayer to avert future lawsuits alleging its popular Roundup herbicide causes cancer, the pharmaceutical and chemical giant announced Thursday that it would consider ending sales of the glyphosate-based weedkiller for residential use in the United States. Read more

The toxicity of 381 pesticides in the U.S. more than doubled for pollinators and aquatic invertebrates over the past two decades. Read more

Monsanto has lost another appeal — this one a $25 million damages award to a San Francisco resident who suffered from cancer after spraying Monsanto’s Roundup herbicide on his property for more than 26 years, The San Francisco Chronicle reported. Read more

Pesticides Are Prevalent and Poisonous 03-26-21

Pesticides are harmful to insects and other wildlife — including humans. The first real accounting of pesticide poisoning since 1990. Read more