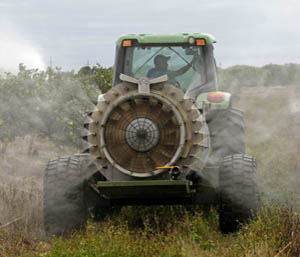 Seasonal spikes of atrazine–a weed killer that can disrupt hormones and harm developing fetuses–contaminate drinking water in corn-growing areas of the Midwest and beyond, according to an analysis of federal records by the Environmental Working Group (EWG). Read more at EcoWatch

Every August, Andrew Joyce used to hunker down in the field beside his house, picking juicy, ripe tomatoes in the blazing sun. But now, he has nothing to sell. Read more at Reveal News

Entire Pesticide Class Must Be Banned to Save Children’s Health, Landmark Study Says 10-25-18

A first-of-its-kind study has reviewed the data and concluded that an entire class of pesticides should be banned because of its impact on children’s health, The Huffington Post reported. Read more at EcoWatch

Glyphosate is in a bunch of popular cereals and oatmeals—but at levels below federal health standards. Experts say it’s difficult to estimate risk from the levels found but the report is still worrisome since children are consistently exposed.

Glyphosate— the active ingredient in Monsanto’s Roundup weedkiller—was found in all 28 samples of different cereals, oatmeal and snack bars tested by a lab for Environmental Working Group, according to a report released today. Read more at Environmental Health News

As lawmakers convene on Capitol Hill to finalize the latest federal Farm Bill, environmental advocates warn that a House proposal could put public health at risk by rolling back restrictions on pesticides in 155 communities nationwide. Read more at Environmental Health News

A review of a decade of research of the impact of pesticides on bees found that even low doses commonly used in agriculture hurt the bees’ learning and memory, a Royal Holloway, University of London press release reported. Read more at EcoWatch

The past few years have revealed some disturbing news for the alcohol industry. In 2015, CBS news broke the announcement of a lawsuit against 31 brands of wines for high levels of inorganic arsenic. In 2016, beer testing in Germany also revealed residues of glyphosate in every single sample tested, even independent beers. Read more at RealFarmacy

After more than 40 years of widespread use, new scientific tests show formulated weedkillers have higher rates of toxicity to human cells

US government researchers have uncovered evidence that some popular weedkilling products, like Monsanto’s widely-used Roundup, are potentially more toxic to human cells than their active ingredient is by itself. Read more at the Guardian

Native Shrimp Must Be Saved From Neonics, Washington State Rules 04-10-18

Monday, the Washington Department of Ecology sided with Center for Food Safety and numerous other community and conservation groups, and denied shellfish growers a permit to spray imidacloprid, a neonicotinoid, on shellfish beds on Willapa Bay and Grays Harbor, in southwest Washington. Read more at EcoWatch

Conventional corn farmers—who grow the ubiquitous grain on 90 million acres in the U.S.—are struggling. Since 2014, these farmers have been spending more to produce corn than they can earn by selling it. Read more at Civil Eats

Monsanto says its pesticides are safe. Now, a court wants to see the proof 03-05-18

On Monday, a federal court hearing in San Francisco will turn a public spotlight on to the science surrounding the safety of one of the world’s most widely used pesticides, a weedkilling chemical called glyphosate that has been linked to cancer and is commonly found in our food and water, even in our own bodily fluids. Read more at The Guardian

Survey of more than 1,500 studies concludes that neonicotinoids harm bees.

In a long-awaited assessment, the European Union’s food-safety agency has concluded that three controversial neonicotinoid insecticides pose a high risk to wild bees and honeybees. Read more at Nature

Federal workers are spraying a weed-killer in the Los Angeles River a state agency recently labeled as carcinogenic.

At issue is the chemical glyphosate, the active ingredient in Roundup, an herbicide used frequently in agriculture and as well as by homeowners, U.S. Rep. Adam Schiff, D-Burbank said. Last summer, the state placed glyphosate on a list of chemicals linked to cancer and birth defects. Read more at Pasadena Star-News

All species evolve over time to have distinct preferences for survival. But with rapidly changing synthetic chemicals, sometimes animals don’t have a chance to develop a beneficial aversion to something harmful. Read more at EcoWatch