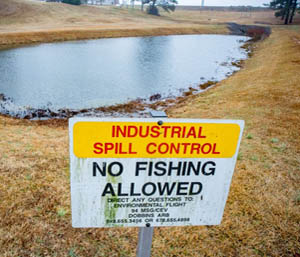 A recent study found that new forests might be our best shot at saving the world. A global guide to doing it right. Read more at Reasons to Be Cheerful

After 18 months of deliberation, City Council on Thursday unanimously approved a bill intended to prevent children from being poisoned by lead paint in rental homes. Read more at WHYY

The Centers for Disease Control and Prevention (CDC) warned Thursday of a drug-resistant strain of salmonella newport linked to the overuse of antibiotics in cattle farming. Read more at EcoWatch

Air pollution may have killed more than 30,000 Americans in a single year despite the fact that particulate matter levels in most U.S. counties fell within federal safety standards, CNN reported. Read more at EcoWatch

Four Air Force bases in South Carolina are severely contaminated with chemicals that scientists continue to investigate for possible links to thyroid disease, pregnancy complications, and kidney and testicular cancers. Read more at The Post and Courier

Four experts weigh in on how booming interest in organic food has changed the industry, and what it means for farmers, policymakers, and eaters. Read more at Civil Eats

If you’re looking to cool off in the waters of Mississippi’s Gulf Coast, think again. Read more at EcoWatch

It’s a myth that environmental regulations stifle economic productivity. Harmful chemicals cost the US $340bn a year. Read more at The Guardian

After a Pittsburgh Post-Gazette investigation identified 47 cases of childhood cancer in rural PA counties, locals are calling on Gov. Wolf to investigate a possible link between fracking & childhood cancer. Read more at Grist

The Incredible Link Between Nature and Your Emotions 06-12-19

More and more evidence suggests that nature does something essential for our mental health. Read more at Outside

Community organizers in Guayama, Puerto Rico, are agitating for the closure of a coal plant, citing research showing that local rates of cancer and asthma have increased substantially since the plant opened. Read more at Truthout

A decades-long study offers valuable insights into the relationship between the environment in which we live and cancer, autoimmune diseases and other disorders. Read more at Ensia

A small town, a chemical plant and the residents’ desperate fight for clear air Read more at The Guardian

A Mother Jones investigation prompted the study that turned up the most convincing evidence to date.Read more at Mother Jones

More than 80 percent of waste from Pennsylvania’s oil and gas drilling stays in the state: Report 04-23-18

Exposure to oil and gas drilling waste has been linked to numerous health impacts, including cancer. Read more at The Daily Climate

After a decade of research, here’s what scientists know about the health impacts of fracking 04-15-19

Fracking has been linked to preterm births, high-risk pregnancies, asthma, migraine headaches, fatigue, nasal and sinus symptoms, and skin disorders over the last 10 years, according to a new study. Read more at The Daily Climate

A jury in the first U.S. federal Roundup trial ruled Wednesday that Bayer must pay more than $80 million in damages to 70-year-old Edwin Hardeman, who developed cancer after using the glyphosate-containing weedkiller. Read more at EcoWatch

The unanimous verdict was announced Tuesday in San Francisco in the first federal case to be brought against Monsanto, now owned by Bayer, alleging that repeated use of the company’s glyphosate-containing weedkiller caused the plaintiff’s cancer. Read more at EcoWatch

Sales of synthetic chemicals will double over the next 12 years with alarming implications for health and the environment, according to a global study that highlights government failures to rein in the industry behind plastics, pesticides and cosmetics. Read more at The Guardian

Researchers found DDT exposure before puberty may have increased the breast cancer risk for women in their 50s.

Melinda Lewis remembers splashing in the irrigation canals that outlined her grandpa’s walnut and almond groves in the late 1960s. Read more at Environmental Health News

With the natural gas fracking boom, plastics production is spreading in the Ohio River Valley. But at what cost to health and climate? Read more at Inside Climate News

More than 5 million Americans get their drinking water from public water systems that could contain hazardous levels of a chemical called nitrate, which is linked to public health risks Read more at Grist

For decades, the United States Air Force used a toxic firefighting foam that contaminated water near bases and exposed communities to chemicals linked to cancer and a variety of other health problems. Read more at The Atlanta Journal-Constitution

The children fell ill, one by one, with cancers that few families in this suburban Indianapolis community had ever heard of. An avid swimmer struck down by glioblastoma, which grew a tumor in her brain. Read more at The New York Times