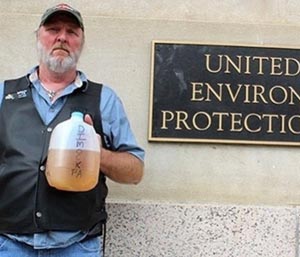 Facing thousands of lawsuits alleging that its talc caused cancer, J&J insists on the safety and purity of its iconic product. Read more at Reuters Investigates

Living near oil and gas wells linked to increase in cardiovascular disease: Study 12-12-18

Those near more intense oil and gas development showed higher blood pressure, changes in the stiffness of blood vessels, and markers of inflammation. Read more at Environmental Health News

The smoke’s gone, but hearts and lungs still may be in danger months after wildfires 11-28-18

While hundreds of sick laborers celebrate a verdict in Tennessee, the EPA is weakening rules to protect them. Read more at The New Republic

The groundwater that once ran cool and clean from taps in this Midwestern farming town is now laced with contaminants and fear. People refuse to drink it. They won’t brush their teeth with it. They dread taking showers. Read more at The New York Times

More than 1.7 million Americans will be newly diagnosed with cancer in 2018, and 35 percent of these cases will prove fatal. Read more at Enviromental Health News

Government employees allege that higher ups do not want to prevent another water crisis.

Four years after the water crisis began in Flint, Michigan, government officials are still debating the best practices to guarantee safety for the city’s residents. Read more at Colorlines

In North Carolina, hog waste pollution a familiar result. Will things ever change? 09-21-18

As Hurricane Florence floods dozens of hog waste pits, many wonder when the broken factory farm system will be fixed.The full extent of Hurricane Florence’s environmental damage isn’t yet known in North Carolina, where waste from factory farms, coal ash, and other pollutants are contaminating floodwaters still on the rise after the largest East Coast deluge north of Florida in history. Read more at Environmental Health News

Old and in the way: Hurricane Florence could barrel over landfills, waste lagoons, hazardous waste sites and more toxics 09-11-18

Thousands of animal waste lagoons, hazardous waste sites and other repositories of toxic material lie in and near the projected path of Hurricane Florence, increasing the risk of breaches or leaks of dangerous chemicals into the environment. (This is one important reason you should avoid wading through or touching flood waters.) Read more at NC Policy Watch

WASHINGTON — The Trump administration has hailed its overhaul of federal pollution restrictions on coal-burning power plants as creating new jobs, eliminating burdensome government regulations and ending what President Trump has long described as a “war on coal.” Read more at The New York Times

Columbia University Medical Center researchers found that mothers with higher exposure to the banned pesticide had an increased risk of a child developing autism.

The discontinued pesticide DDT is linked to an increased risk of autism, according to a new study out of Columbia University Medical Center. Read more at Environmental Health News

There’s no doubt urban green spaces are more pleasing to the eye than trash-strewn vacant lots that have been sitting in various stages of neglect for who knows how long.

But can transforming scattered patches of urban blight into green spaces also help to alleviate the blues? Read more at Mother Nature Network

3M Knew About the Dangers of PFOA and PFOS Decades Ago, Internal Documents Show 07-31-18

News that the Environmental Protection Agency pressured the federal Agency for Toxic Substances and Disease Registry to suppress a study showing PFAS chemicals to be even more dangerous than previously thought drew outrage this spring. Read more at The Intercept

Industrial chemicals dumped long ago still haunt Minden, W.Va., a community beset by cancer and fear. Like her father, physician Ayne Amjad is trying to track the links. Read more at The Washington Post

A once-suppressed report on water contamination in military communities has led to little action, victims say. But there are rumblings in Congress. Read more at The New Republic

Faced with asthma and illness, citizens are taking air quality into their own hands 07-14-18

Until she moved to Fresno, California in 2003, Janet DietzKamei had never experienced asthma. But after just a few years in a city notorious for its filthy air — the American Lung Association lists it in the five worst U.S. cities for air quality — DietzKamei found herself in the emergency room struggling to breathe. Read more at Grist

The fear that cancer is stalking their children has left some of Oakdale’s parents saddened and bewildered. “We’re bombarded with it,” said one mother, Kristi Schaut, who lost her daughter to leukaemia in 2007. Read more at The Sydney Morning Herald

Nature and Neurodevelopment: Differences in Brain Volume by Residential Exposure to Greenness 06-05-18

A growing body of epidemiological studies have found associations between proximity to vegetated green areas (“greenspace”) and multiple measures of good health.1 Now researchers have examined how a child’s exposure to greenspace may affect the development of his or her brain structure. Read more at NIH Environmental Health Perspectives

‘It’s wrong to stink up other people’s lives’: fighting the manure lagoons of North Carolina 05-24-18

Pigs outstripped people in Duplin county long ago – but now the residents are fighting back. Read more at The Guardian

Researchers have found a link between a substance in our water, soil and air and fewer babies being born

Lead in water is a well-known health hazard, but now there’s evidence of a link between lead in soil and air and humans’ ability to have babies. Read more at Market Watch

Within a year of eight coal- and oil-fired power plant retirements, the rate of preterm births in mothers living close by dropped, finds new study on air pollution. Read more at Inside Climate News

Mosquito season has officially arrived in Florida, although many would argue it never left.

That perception may soon become reality, according to new studies that show the higher temperatures brought on by climate change are already increasing the range and biting season for many mosquitoes. Read more at the Miami Herald

Mice exposed to fracking chemicals during pregnancy were less able to fend off diseases; scientists say this could have major implications for people near oil and gas sites

Chemicals commonly found in groundwater near fracked oil and gas wells appear to impair the proper functioning of the immune system, according to a lab study released today. Read more at Environmental Health News

Milk pricing policies have left small producers at their wit’s end. Brenda Cochran was a self-described “city girl” before she married her husband in 1973. He was a dairy farmer, so she joined him on a small farm in Pennsylvania. They’ve been working together since 1975. Cochran says that if she’d known how difficult dairy farming would be today, she never would have done it. Read more at Mother Jones

A new county-by-county report finds that blacks and Native Americans have the most dire health statistics in the United States. Read more at City Lab

Even families who work in the industry worry about the air blowing out of the barns, some packed with 40,000 birds. But Big Poultry has the political clout here. Read more at Inside Climate News

Agriculture could pull carbon out of the air and into the soil — but it would mean a whole new way of thinking about how to tend the land.

When John Wick and his wife, Peggy Rathmann, bought their ranch in Marin County, Calif., in 1998, it was mostly because they needed more space. Read more at The New York Times

Over-prescription of antibiotics is a dangerous and ineffective practice that can lead to a disrupted intestinal environment that promotes diseases like candida overgrowth. But there is another more indirect way that they can get into your system that is much harder to avoid: antibiotics in food as a result of their extensive use in farm animal production. Read full article at Health Ambition

Women with high levels of glyphosate—the active ingredient in Monsanto’s Roundup weed killer—were more likely to have a shorter pregnancy, according to a new study. Read more at Environmental Health News

Our connection to nature is sacred, dating back to the beginning of our existence. It’s no wonder then that our health is intimately intertwined with the earth—from the soil beneath our feet, to the food we eat, to the water we drink and to the air that fills our lungs. Read more at EcoWatch

The major challenge comes down to changing my habits. After years of enjoying bacon with my eggs for breakfast, I now associate its comforting greasy taste with the feeling of fullness. So how do I—and others like me—overcome this obstacle? One big challenge is finding a way to stay motivated. Read more at BlitzResults

In the United States alone, air pollution kills about 115,000 people a year — more than three times the number of deaths caused by motor vehicles. Worldwide, some 7 million people died in 2012 alone from exposure to air pollution, according to the World Health Organization. Read more at ENSIA

Children in the world today are exposed to thousands of environmental toxics, and these toxic chemicals are making our children sick. Read more at Environmental Health News

During the 15 years that Jacqueline Young lived in Griffin Park, a federal housing project, she always worried about the air that she and her granddaughter were breathing. Read more at Huffington Post

People yearn for alternatives to industrial agriculture, but they are worried.

They see large-scale operations relying on corporate-supplied chemical inputs as the only high-productivity farming model. Another approach might be kinder to the environment and less risky for consumers, but, they assume, it would not be up to the task of providing all the food needed by our still-growing global population. Read more at Environmental Health News