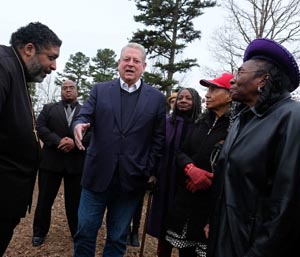 Will the world’s leading pork producer be held responsible for making life unbearable in rural Southern communities? Read more at The Nation

‘We’re just waiting to die’: the black residents living on top of a toxic landfill site 12-11-19

In the 1980s, black New Orleanians were encouraged to buy houses built by the city on top of a toxic landfill. Three decades later it is one of Louisiana’s worst cancer hotspots, but residents of Gordon Plaza are still fighting to be relocated . Read more at The Guardian

The disturbing link between environmental racism and criminalization 12-09-19

How powerful institutions are criminalizing populations by locking people up and deeming them undeserving of clean air, water and healthy housing. Read more at Environmental Health News

The Atlantic Coast Pipeline would divide mountains, farmland, and sacred Native American land along its 600-mile route, but it’s uniting a diverse community of activists determined to halt its progress. Read more at bioGraphic

Tracing water, memory and change through Black experiences along and near Pennsylvania’s Route 65 11-21-19

Talking to Black residents living in communities along and near Route 65 about where they live and their experiences in these places, in the context of their connections to water. Read more at Environmental Health News

This Spring, right before Earth Day, New York City passed its very own Green New Deal — an ambitious plan for eliminating carbon emissions by 2050. Los Angeles launched its own plan with the same name and goal just a few weeks later Read more at Grist

A textbook example of environmental racism has unfolded in Union Hill, Virginia. Read more at Getting More on the Ground

The Stark Inequality of Climate Change 10-17-19

As Hurricane Florence moved across the Atlantic in early September of 2018, state officials issued evacuation orders for communities along the Virginia and Carolina coasts. Read more at The New Times

Contender’s proposal builds on her platform to fight climate crisis by investing $3tn in next decade to combat global heating. Read more at The Guardian

Bethel Baptist Church in Birmingham, Alabama, has served Collegeville, a predominantly Black neighborhood, for 115 years. Today, the church is dealing with a new era of injustice: Its historic neighborhood sits on toxic land. Read more at Scalawag Magazine

Inaction is Unjust: A Story of Wind, the NIMBY Effect, & Environmental Justice 09-21-19

URBAN HEAT ISLANDS VIVIDLY ILLUSTRATE the price humans will pay in the world’s growing climate crisis. With an abundance of concrete and little shade, they get hotter faster and stay hotter longer. And the people who live there are often sicker, poorer and less able to protect themselves. Read more at HOWARD CENTER FOR INVESTIGATIVE JOURNALISM | CNS | NPR

How Workers Can Demand Climate Justice 09-02-19

A Bargaining for the Common Good approach to the climate crisis

As Greenland experiences a record melt, Europe recovers from record-breaking heat, California braces for another fire season, and Puerto Rico still struggles to rebuild nearly two years after Hurricane Maria, it is becoming ever clearer how profoundly the climate crisis is changing everything, and how imperative it is that we act now if we hope to avert an existential disaster. Read more at The American Prospect

For more than a week, thousands of Newark, N.J. residents have been lining up, enduring midday summer heat, and waiting for free bottled water. Read more at The Washington Post

Saying they’ve endured years of unfair contracts, discrimination, and retaliation from a handful of big companies that control the industry, farmers and ranchers are asking USDA to enforce the GIPSA rules. Read more at Civil Eats

The Trump administration has weakened legal protections for farmers and eased off enforcing rules on powerful meat companies. Read more at ProPublica

Tony Reames focuses his work on the growing energy divide between rich & poor Americans and talks about why it is important to give low-income communities better access to affordable clean energy technologies. Read more at Yale Environment 360

No, climate action can’t be separated from social justice 06-11-19

Now that climate change is finally becoming a thing on cable news, networks also seem to be catching on to the existence of climate injustice. Read more at Grist

African-Americans are three times more likely to die from asthma as whites. In Philadelphia and elsewhere, how can outcomes improve with changes to housing quality and pollution control? Read more at Next City

Natural Disasters Are Getting Worse. People With the Least Power Are Most at Risk. 04-25-19

The federal government estimated in Oct. that there were nearly $1.3 billion in immediate and direct timber damages in Florida’s panhandle. Read more at The Center for Public Integrity

Inside the push to tear down an Oakland freeway. When a government official takes a reporter out to see some concrete colossus, it’s usually to show it off. Not this time. Read more at Grist

‘They chose us because we were rural and poor’: when environmental racism and climate change collide 03-08-19

The environmental movement has a long history in America’s south – yet people of color and impoverished communities continue to face dangerous pollution. Read more at The Guardian

It’s no secret that communities living near big polluters have worse air quality than other neighborhoods, but it’s been trickier to get a grasp on the impact of emissions from moving sources of pollution like cars and trucks. Read more at Grist

The little front porch seemed like a pulpit as the Rev. William Barber II outlined a path to redemption for Virginia’s troubled governor, Ralph Northam. Read more at The Washington Post

Amid growing signs that gender bias has affected research outcomes and damaged women’s health, there’s a new push to make science more relevant to them. Read more at National Geographic

A new study in Nature Sustainability finds racial and ethnic disparities in rooftop solar adoption, even controlling for income and homeownership. Rear more at Citylab

The boundary between the United States and Mexico cuts not only through desert terrain and pristine wilderness, but also indigenous territory. Specifically, the territory of the Tohono O’odham Nation, which is located in both countries. Read more at Grist

Dr. Martin Luther King, Jr. is remembered for his powerful civil rights legacy and his nonviolent protests that inspired half a century of peaceful protest in support of equality. As a visionary orator and leader, he shepherded the movement against segregation and racism in the 1950s and 1960s that transformed America. Read more at National Wildlife Federation