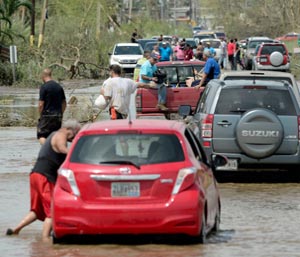 Climate change is a major threat to life on Earth — but not a major focus of biology textbooks. Read more

With Colorado River reservoirs nearing dangerously low levels, the federal government has given basin states a Jan. 31 deadline to negotiate major water cuts and stave off a possible collapse in supplies. Read more

How capitalism crushed the environment, according to historian Douglas Brinkley 12-01-22

Now that the green carpet has been rolled up, the green gowns packed away, and our green-themed royal visit consigned to the history books, an uncomfortable truth remains: 2022 has been a rough year for the environment. Read more

How developing countries’ 30-year battle for “loss and damage” funding culminated in a new agreement in Egypt. Read more

9 in 10 US counties have experienced a climate disaster in the last decade, report finds 11-16-22

Climate change is here and “all taxpayers are paying for it.” Read more

During U.N. climate change negotiations the United States signaled its support for the adoption of language calling for phasing down the use of fossil fuels. Read more

Getting a handle on these “super-emitters” could yield major benefits for the climate. Read more

In the face of global inaction, climate change — inextricably linked to health inequities — is leading us toward planetary collapse with a ‘fast track to climate disaster’ and ‘civilization collapse,’ as has been highlighted by the Intergovernmental Panel on Climate Change. Read more

The Southeast’s low cost of living beckons retirees and younger workers, but the boom is putting more people in harm’s way. Read more

The coastal region is severely flood-prone, even with smaller storms. Read more

When I tell bird-loving audiences what puffins mean to me, I start with the expected. Read more

Support for climate policies is double what most people think, a new study found. Read more

People doubt their actions affect climate change. Is that a bad thing? 08-23-22

Without Congress, what can Biden do to stem the climate crisis? 07-19-22

The loss of sea ice is exposing darker waters, which absorb more of the sun’s energy. It’s a devastating feedback loop with major consequences for the planet. Read more

It’s not your imagination: This summer is already hotter than normal. Read more

Spend time in a city in summer and you can feel the urban heat rising from the pavement and radiating from buildings. Cities are generally hotter than surrounding rural areas, but even within cities, some residential neighborhoods get dangerously warmer than others just a few miles away. Read more

Ice world: Antarctica’s riskiest glacier is under assault from below and losing its grip 06-07-22

Flying over Antarctica, it’s hard to see what all the fuss is about. Read more

As the Great Salt Lake Dries Up, Utah Faces An ‘Environmental Nuclear Bomb’ 06-07-22

Climate change and rapid population growth are shrinking the lake, creating a bowl of toxic dust that could poison the air around Salt Lake City. Read more

How last year’s record-breaking heat wave caused misery and chaos for Washington’s incarcerated population — and why it’s set to happen all over again. Read more

The Cape Fear River is unparalleled in many ways. Read more

The Vanishing Rio Grande: Warming Takes a Toll on a Legendary River 06-02-22

The Rio Grande, which flows out of the Rockies and later forms the U.S.-Mexico border, has long been impacted by withdrawals for agriculture and other uses. Read more

But zeroing out emissions could create a green Industrial Revolution, a new report says. Read more

States and the federal government can do more to protect homebuyers, like reforming flood disclosure laws. Read more

Records have fallen in the Lone Star State, where readings spiked as high as 112 degrees. The Weather Service predicts scores of records will fall throughout the central U.S. through Thursday. Read more

The Southwest is on fire, iconic deserts and towns are at risk and Biden has issued a disaster declaration 05-04-22

It’s raining harder than ever. New research says climate change is to blame. 04-27-22

Warmer temperatures cause heavier rainfall across the U.S. — even in the driest cities. Read more

War in Ukraine poses environmental risk now and in the future, advocates say 04-19-22

But 1.5 degrees, the world’s most ambitious goal, still looks out of reach. Read more

Thawing permafrost is roiling the Arctic landscape, driven by a hidden world of changes beneath the surface as the climate warms 04-12-22 Read more

The climate case for seizing superyachts, Russian and otherwise. 04-05-22

Inuit groups spent decades hosting researchers from far away to study the ice and animals. Now they’re taking up the tools and reshaping the science. Read more

The Next Level in Sustainability: Nature Restoration 03-15-22

Developers are no longer aiming to simply preserve nature, but are actively restoring it as a selling point for their projects. Read more

How the West’s megadrought is leaving one Arizona neighborhood with no water at all. 03-10-22

Thanks to Colorado River cuts, hundreds of residents on the outskirts of Phoenix are “the canary in the coal mine.” Read more

The U.N. Intergovernmental Panel on Climate Change today released a sweeping report on the dangerous effects that rising global temperatures are already having. Read more

Human behavior is key to determining our climate future, but most scientific models don’t take it into account. Read more

An ‘emerging crisis’: The climate is changing too fast for plants and animals to adapt 02-18-22

Fueled by climate change, the drought that started in 2000 is now the driest two decades since 800 A.D. Read more

Average maximum ice cover on the lakes has fallen 22 percent over the last 50 years. Read more

North Carolina is in a prime position to become a hub for offshore wind energy manufacturing and a major contributor to renewable power production on the East Coast. Read more

The global motion to sell off fossil fuel assets has picked up major speed this year. Read more

Since the late 1980s, Earth’s oceans warmed at a rate eight times faster than in the preceding decades Read more

While much of the nation’s attention to climate adaptation has focused on large coastal cities with outsize risks, some of the most forward-leaning climate policies are coming from less urbanized places such as Marina, Calif.; Carmel, Ind.; and the Jersey Shore. Read more

While rescuing wasted food gets all the headlines, a new EPA report shows that avoiding it completely offers bigger benefits. Read more

In Michigan, a new housing project shows that sustainable development isn’t only for the rich 01-02-22

Urban planners see it as a building model in a climate-conscious world. Read more