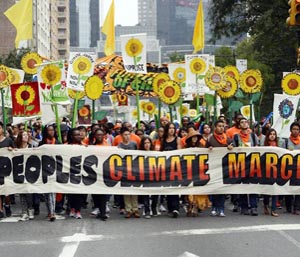 Two ’90s-era coal-funded videos on CO2 featured government scientists who say their comments were misleadingly edited. How it all happened. Read more at Yale Climate Connections

The “blob” of hotter ocean water that killed sea lions and other marine life in 2014 and 2015 may become permanent. Read more at The New York Times

Open water and rain, rather than ice and snow, are becoming typical of the region, a new study has found. Read more at The New York Times

There are four key ingredients to the disastrous wildfire seasons in the West, and climate change is a key culprit. Read more at The New York Times

The organization is one of the world’s largest proponents of sustainable investment. Read more at Politico

The chemical bisphenol A, or BPA, which is ubiquitous in plastic bottles, can linings and receipts, has been linked to numerous health issues because it disrupts hormone function. Read more at EcoWatch

Enviva and other firms can only make biomass profitable by relying on government subsidies. In the end, forests are lost and carbon neutrality takes decades to achieve. Read more at Mongabay

Dreaming of a white-picket-fence home in an affluent suburb? Chances are your carbon footprint will be 15 times larger than your less-well-off neighbor. Read more at EcoWatch

While the world has been focused on a global pandemic and widespread protests, another crisis is gathering in the atmosphere. And no, it isn’t carbon dioxide. Read more at Grist

The Wood Pellet Business is Booming. Scientists Say That’s Not Good for the Climate. 07-13-20

Trump’s EPA is expected to propose a new rule declaring burning biomass to be carbon neutral. Read more at Inside Climate News

There’s a right way to do infrastructure. Why does America get it wrong? Read more at The New York Times

The outlook demonstrate the need for drastic action — particularly if countries hope to keep global warming below 2 degrees Celsius by the year 2100. Read more at NBC News

Millions of Americans have no idea they’re living in a flood zone. Now you can look up every property in the U.S. and see the flood risk for yourself. Read more at Vice

Did blotting out the night sky dull our drive to stop climate change? Read more at Beyond Nuclear

Most weeks, we talk about how to save the world, which seems the only accurate way to put it, given that we’ve just lived through the hottest May in recorded history and that the carbon-dioxide levels in our atmosphere just hit a new high, unmatched in the past three million years. Read more at The New Yorker

New York’s most famous skyscraper shrank its planet-warming emissions by 40 percent. Can the rest of the city do the same? Read more at The Washington Post

This week’s newsletter is a little different, in that I mainly want to encourage you to watch a video and then play with a Web site. Both come from the remarkable people at Climate Interactive, a project that grew out of M.I.T.’s Sloan School of Management. Read more at The New Yorker

Earlier this year, Microsoft announced a bold new climate goal: By 2030, the company aims to be “carbon negative,” meaning it will be pulling more carbon dioxide out of the air than it emits. Read more at Grist

Coronavirus is a make-or-break moment for climate change, economists say 05-11-20

A decade ago, as world economies clawed their way back from the global financial crisis of 2008, climate experts pushed nations to adopt green spending plans that would boost renewable energy and cut fossil-fuel emissions. Read more at Grist

After the Coronavirus, Two Sharply Divergent Paths on Climate 04-07-20

Some policy experts are optimistic that victory over the coronavirus will instill greater appreciation for what government, science, and business can do to tackle climate change. But others believe the economic damage caused by the virus will set back climate efforts for years to come. Read more at Yale Environment 360

Decarbonizing will cost trillions of dollars, but it’s an investment that will have big return — for the economy and the environment Read more at Rolling Stone

Breaking Transmission: The Fight Against the Coronavirus Offers a Strategy for Cutting Carbon 03-25-20

We’ve all learned a good deal about epidemiology in the past few weeks. In particular, the notion that staying at home can break chains of transmission, and thereby interrupt the spread of the coronavirus. Read more at The New Yorker

The coronavirus pandemic is going to require a major economic stimulus. Here’s how climate could be incorporated. Read more at Grist

In the past few weeks, governments around the world have enacted dramatic measures to mitigate the threat of COVID-19. Read more at EcoWatch

It is no surprise if the past few months have not been the winter wonderland you were hoping for. Read more at EcoWatch

Across much of the U.S., a warming climate has advanced the arrival of spring. This year is no exception. Read more at EcoWatch

What Would It Take to Get More Farmers Fighting Climate Change? 02-26-20

A new bill sponsored by Rep. Chellie Pingree would enlist growers to help slow global warming by using their soil to sponge up carbon dioxide. Read more at Mother Jones

The Union of Concerned Scientists estimates that the environmental impact of Uber and Lyft rides is 69% worse than the transportation modes they replace. Read more at Citylab

Eastern Kentucky Has Been Underwater, but You Probably Didn’t Notice 02-23-20

An out-of-sight, out-of-mind mentality can take hold when people lose their connection to nature. Read more at The Atlantic

Inundation and flooding are steadily becoming more likely. Worldwide rise being driven by melting of large glaciers. Read more at The Guardian

Absent any major policy shift in this decade, the amount of carbon dioxide the United States adds to the atmosphere each year is projected to begin rising by the 2030s, according to a new government report. Read more at The Washington Post

Teenage climate activist Greta Thunberg is returning to the Swiss ski resort of Davos for the 2020 World Economic Forum with a strong and clear message: put an end to the fossil fuel “madness.” Read more at EcoWatch

The 2010s were the warmest decade on record, government researchers confirmed on Wednesday. Read more at The New York Times

Want to Do Something About Climate Change? Follow the Money 01-11-20

Chase Bank, Wells Fargo, Citibank and Bank of America are the worst offenders. Read more at The New York Times

Just a week into the new year, and the first estimate of how much planet-cooking pollution the United States belched into the atmosphere last year is already in. It’s not the kind of report card you’d be proud to show your parents, but at least it won’t leave you in tears. Read more at Grist

From the outskirts of Selby, a 1,200-year-old former coal-mining town in northern England, you can see the smokestack and the dozen cooling towers of the Drax Power Station, the largest power plant in the United Kingdom. Read more at The News & Observer

When thinking about how to reduce our individual carbon footprints, one of the simplest ways to cut back on emissions is to fly less often. But for those who want to see the world, there are ways to make trips more sustainable, including where you go, what you pack and how you decide to get there. Read more at The New York Times