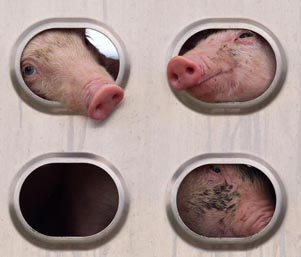 When I reached Mike Williams by phone last week, the head of poultry science at North Carolina State University was in the field, visiting barns. At each stop, he came across the same sad scene: thousands of dead, sodden birds. Read more on Grist

Factory farming practices are under scrutiny again in N.C. after disastrous hurricane floods 10-16-16

In North Carolina, massive flooding in the wake of Hurricane Matthew isolated or swamped these and other hog farms and their waste lagoons, raising fears of environmental contamination. Read more on The Washington Post

At least tens of thousands of chickens, hogs and other livestock are feared dead in floodwaters that washed over factory farms and towns in eastern North Carolina following Hurricane Matthew. Read more on Washington Post

Confining breeding sows in tight crates is among the long-standing farm practices that are exempted from animal cruelty laws in Illinois. Weeks after taking a job as a breeding technician at Eagle Point Farms, an anguished Sharee Santorineos sat down and wrote a three-page whistleblower complaint. Read more on Chicago Tribune

Wandering the meat and dairy aisles of most grocery stores is a bit like sitting down to read a children’s storybook. Gleaming red barns jut out of green rolling hills. Cartoon cows and chickens graze in the shade of a tree or eat feed from the hand of a farmer. Add a few well-placed words like “all-natural” or “farm fresh” to this bucolic scene and the average harried grocery shopper is probably going to buy into this pleasant story of animals living the good life. Read more on EcoWatch