Where Does the Power of Fossil Fuels Come From?

Although the United Nations Climate Change Conference of 2021 (COP 26) ended in November 2021, it is still critical to address the troubling demonstration of power that the fossil fuel industry has in dictating the future of our species on this planet both at international negotiations and at home.

At COP 26, there were 503 lobbyists representing around 100 oil, gas, and coal companies, including Shell and BP – a delegation even larger than any country. Even more disturbing is that fossil fuel delegates outnumbered the combined representatives of the eight countries and territories most affected by the climate crisis (Myanmar, Haiti, the Philippines, the Bahamas, Bangladesh, Puerto Rico, and Pakistan). At COP26, participating nations agreed to the “phase-down” fossil fuel usage and subsidies, but even that conclusion resulted in prolonged debate. While this agreement may be a good first step, many analysts argue that COP26 did not go far enough. Given the overwhelming number of fossil fuel representatives roaming the corridors, it should come as no surprise that it would be awfully difficult to reach a more effective outcome for climate justice. It is easy to be outraged at the huge representation and power the fossil fuel industry has at treaty negotiations, but we need to acknowledge its influence close to home. Even my own campus, the University of North Carolina – Chapel Hill, supports the power of the fossil fuel industry through its endowment investments.

Although UNC is often praised as a leading campus in sustainability and even had representatives attend COP 26, the university only contributes to the fossil fuel industry’s outsized influence by consistently investing hundreds of millions of dollars in it every year. Within the investments of the UNC System’s $6.7 billion endowment, controlled by the UNC Management Company, 4.5% of those funds went into the Energy and Natural Resources category in 2020 alone. With only a reported $9.5 million of that category going towards “clean” energy, the remaining $291 million is likely going towards the fossil fuel industry. However, due to the UNC Management Company’s lack of transparency, we do not know precisely to which companies or specific industries this money goes. Nevertheless, every dollar invested in the fossil fuel industry is too much, let alone a potential $292 million in a single year. 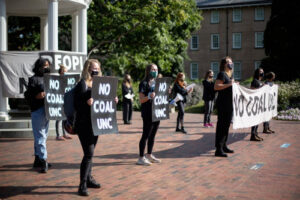 Overall, the fossil fuel industry’s influence on climate policy is deeply disturbing. If we want to limit their power while making the goal of a livable planet more attainable, we must start at UNC – Chapel Hill by divesting from fossil fuels. Campuses within the UNC system, like UNC-Asheville, have had successful divestment movements, and due to the university’s status, other schools have followed in their footsteps. With Harvard University announcing divestment in Fall 2021, many other schools hopped onto the bandwagon, including UNC’s sister schools. Harvard University has helped create a domino effect; it is time that UNC does the same to motivate other schools to divest. Therefore, it is crucial to keep the momentum of the current fossil fuel divestment movement on UNC’s campus going. With my organization, UNC Reinvest, we have had growing success in collaborating with other organizations to organize Climate Strikes, Divestment 101 Presentations, and spread the word on campus through social media. By keeping up the hard work and continuing the exciting projects that UNC Reinvest is currently pursuing, UNC will finally break free from its toxic relationship of fossil fuels. Others will surely follow and the influence of the fossil fuel industry will erode, even in the halls of policy and power.

RCC Fellow Gabriela Duncan is a junior at the University of North Carolina at Chapel Hill, majoring in Interdisciplinary Studies: Environmental Justice with a minor in Geography.