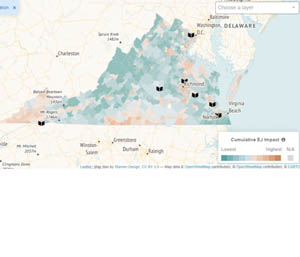 Opponents of a proposed Atlantic Coast Pipeline compressor station in Buckingham County protested outside the General Assembly Building ahead of a State Air Pollution Control Board meeting in 2018. (Ned Oliver/Virginia Mercury – Dec. 19, 2018)

Amid persistent conflicts over what communities should be considered “environmental justice” communities when state officials weigh whether to grant air, water or waste pollution permits, a new interactive map of Virginia aims to identify hotspots where residents are facing disproportionate pollution and socioeconomic burdens.

“Policymakers are not good at responding to what they see as anecdotal evidence,” said Adam Buchholz, executive director of the Mapping for Environmental Justice initiative, a team of policy experts and data scientists funded through the Earth Island Institute that wants “to increase the power of communities in ending environmental injustices.”

Maps, he said, can provide a broader view of trends, particularly regarding what’s known as cumulative impacts — the term used by the U.S. Environmental Protection Agency to describe “the combined, incremental effects” of human activities occurring in a particular place and time that might be insignificant on their own but when taken together can overburden a community.