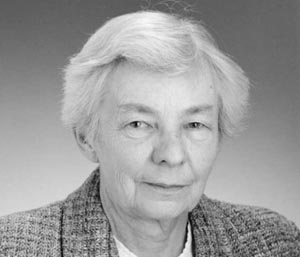 Never heard of Mary Amdur? Neither had I. 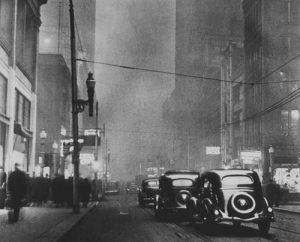 She is the modern mother of air pollution science who in 1953 stood up to physical intimidation by corporate hired goons who tried to prevent her from reporting her findings. Without her bravery and ingenious work, we would not have mostly clear skies or the Clean Air Act. We would all be living in 1940s Pittsburgh. She should be a household name and hero for every scientist and every citizen – an icon in the current renewed debate whether scientists should dare to promote their findings to the public and push for public policy.

But thank her for Alzheimer’s prevention? Follow me here. Americans are increasingly concerned about Alzheimer’s disease, a scourge that is projected to increase in the coming decades as our population ages and grows. The dread disease has no known cure and leads not only to memory loss, but also to disability and death. 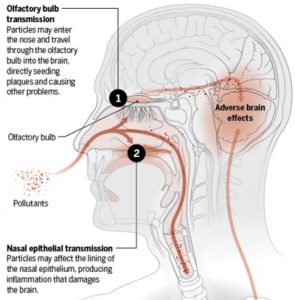 Pollutant particles might make their way to the brain and damage it directly, or they might attack it from a distance, by triggering the release of inflammatory molecules. 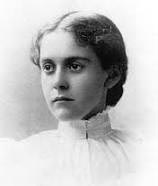 Prevention is the key. If air pollution can cause Alzheimer’s, how do we get rid of it? Clean air has been seen as essential to health since Hippocrates wrote Air, Water, Places in 352 A.D. Another pioneering woman of the early twentieth century, Dr. Alice Hamilton, whom I profiled in Rachel Carson and Her Sisters, along with other women scientists and writers in the tradition of Rachel Carson, fought lead in gasoline that ended up inside humans through air pollution.

But manufacturers like the Ethyl Corporation fought back and claimed there was no proof. What followed was a long struggle to measure pollutants in the air and to connect them to adverse human health effects, and to regulate harmful emissions. Enter Dr. Mary O. Amdur, who was mentored by Dr. Hamilton and her protégée, Dr. Harriet Hardy, at the Harvard School of Public Health where Amdur joined the faculty in 1949.

Mary Amdur worked as an Assistant Professor at Harvard with Philip Drinker, a leading pulmonologist and inventor of the iron lung. Her task was to develop a test for lead in particulate matter, or soot, in the air. Amdur developed a novel hand pump to measure mere micrograms of lead in the air. The pump could be brought into the field in factories, garages, and repair shops. Then Amdur solved the problem of how to measure the toxic effects of very small doses of pollutants. She began an investigation of lung irritation from sulfuric acid in human lungs. Her research was funded by the American Smelting and Refining Company (AS&R) that actually hoped her findings would show that sulfuric acid was only a small component of the disastrous, deadly 1948 fog in Donora, Pennsylvania, that killed and sickened residents.

She invented a way to spray a fine sulfuric acid in a controlled chamber of guinea pigs who, unlike lab rats, breathe through their mouths, not their noses. This allowed the mist to enter deep in the lungs, causing lung damage. This proved that it was the irritants that caused lung damage even when there were no lung spasms, previously thought to be the cause of damage. Amdur went on to study the role of particulates in human health and presented her findings at the AAAS meeting in 1953.

This, of course, caught the attention of AS&R and others in industry. When Dr. Amdur went to present her findings at the American Industrial Hygiene Association’s 1953 meeting in Chicago, two big, tough guys in leather jackets got onto the elevator with her. They moved in close and said, “Hey, Mary, where you going? You’re not going to deliver that paper are you?” Undaunted, she delivered her paper. When she returned to Harvard, Drinker ordered her to withdraw the paper she had co-authored with him from the prestigious medical journal, The Lancet where it had already been accepted. When she refused. Drinker fired her. Eventually, she was able to move to a different untenured position at Harvard as research associate where she raised her own funds. She then moved to a non-faculty position at MIT and then to the Institute of Environmental Medicine at NYU – all the while having to raise her own funds.

Ultimately, Amdur got some belated recognition when further research at Harvard extending her work connected tiny particulates in the air to human deaths and helped create new national air quality standards (NAAQs) promulgated by the Clinton Administration after fierce opposition and an extended battle from manufacturers and their conservative Congressional allies led by Newt Gingrich. 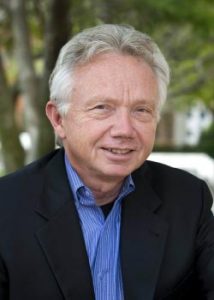 Clean air standards, like all environmental protections and regulations are again under attack with the advent of the Trump Administration and Republican-controlled Congress. Air pollution, we now know, contributes not only to respiratory problems such as asthma, it is a factor in lung cancer, cardiovascular disease, heart attack, and stroke. And, yes, Alzheimer’s. That is why we should thank Mary Amdur and emulate her bravery.

There are signs that this is happening. The American Public Health Association (APHA), where Amdur first presented her findings, is mounting a conference on environment and health in Atlanta to replace one cancelled by the Centers for Disease Control and Prevention (CDC) as the Trump Administration was sworn in. Scientists are planning a march on Washington and are speaking out. It is, as Dr. Dick Jackson, former Director the National Center for Environmental Health at CDC, puts it, the responsibility of all scientists, public health officials and researchers to speak out, no matter what the consequences. To do otherwise, Jackson says, constitutes “malpractice.”