Young people are the leaders of the climate movement. RCC Associate Director and Campus Coordinator Mackay Pierce returned to this message often during his visit at McDaniel College in Westminster, Maryland. Pierce’s time at McDaniel came among stops at other institutions as he traveled to recruit for the RCC Fellowship Program, a competitive national program designed to identify student environmental leaders and support them in campaigns for sustainability on their campuses and in their communities, as well as the upcoming RCC Capitol Hill Days, a national advocacy event for students and faculty being held in March.

The visit, organized by Dr. Elly Engle, Assistant Professor of Environmental Studies, allowed Pierce the opportunity to visited a number of classes on campus in environmental sociology, history, and policy. The theme remained consistent throughout, as Pierce met with students and talked about ways that they could involve themselves in the climate movement today, and why they may even have a responsibility to do so. “As members of one of the first generations to be impacted by the climate crisis, we all have a responsibility to take action. What kind of world would you like to live on in thirty years? What do we have to do today to make sure that happens?” 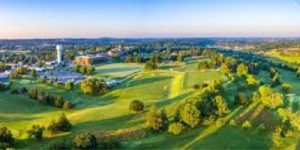 McDaniel has a robust environmental studies program and a passionate group of students to complement it. In September, students from the campus environmental activist group “Greenlife” and the student Progressive Union coordinated a strike in solidarity with strikes happening around the globe to demand action on climate change. Elsewhere, the college has an impressive off-campus site, the Singleton-Matthews farm, where the college and environmental studies department have ambitious plans to engage students in ways to practice sustainability. Pierce toured a small section of the sixty-acre farm site, but was able to see some of the excellent projects that students in previous years have already completed, and see the beginning of a large hillside multi-use fruit forest, overseen by Elly Engle.

As the visit came to a close, Pierce pressed students to consider what their role is in this historic political moment: “As environmental students, you all have already realized that there is a problem. The challenge now is to figure out what you want to do about it.”