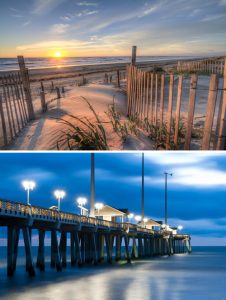 North Carolina is known for the beauty of its Atlantic beaches and coast that first inspired Rachel Carson. But tourism to the fabled Outer Banks is just one part of the economy on which North Carolina depends. Fishing for fun and for business — is critical to the Tar Heel State.

Unfortunately, fish numbers of six commercially important species are in decline, especially from overfishing. Reproduction is vital to maintaining population numbers, but some marine fish in North Carolina do not have the opportunity to spawn before they are caught. Fish that die before they reproduce cannot replenish their population. Overfishing presents a grave threat to North Carolina’s coastal ecosystems and economy. It must be stopped.

A number of key commercial and recreational fish species in North Carolina have experienced precipitous drops. According to the Division of Marine Fisheries (NC DMF), in the last two decades, there has been a serious decline in fish landings of Atlantic croaker, kingfish, striped mullet, spot, southern flounder and bluefish.

As a result, North Carolina. House Bill 483, “Let ‘em Spawn Before They’re Gone,” proposed by the North Carolina Wildlife Federation (NCWF), has recently passed the North Carolina General Assembly. It will be taken up by the Senate in the spring of 2020 and must pass if the plunge in marine fish is to be halted. HB-483 addresses fish stocks that have “historically provided tremendous commercial and recreational opportunities that no longer exist due to overfishing.” It sets a size limit that would allow 75% of fish to reach maturity with the opportunity to spawn at least once before capture (NCWF, 2019).  The goal of HB-483 is to have collapsing fish stocks flourish with a “healthy spawning class of adult fishes which increases the yield to the fishery all while creating resiliency when environmental conditions are unfavorable” (NCWF, 2019). 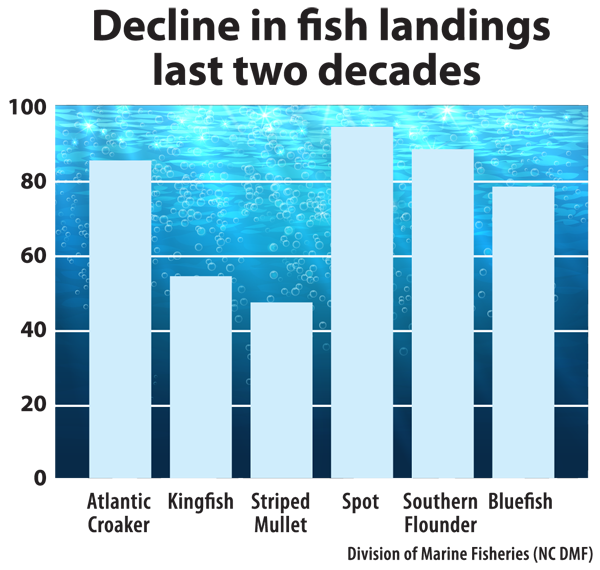 The bill states that  G.S. 113-182.1(b) is to be amended by adding a new subdivision to read: “(8) Include a minimum size limit for spot, Atlantic croaker, kingfishes, striped mullet, southern flounder, and bluefish, to ensure that seventy-five percent (75%) of the juvenile fish at the minimum size limit established for the species will reach the size of maturity and will have an opportunity to spawn at least once. The minimum size limit required by this subdivision shall be based on the best available biological and life history data for each species (North Carolina General Assembly, 2019).

How fish are caught by commercial and recreational fishing, along with shrimp trawling, is not just a coastal issue. A lack of sustainable fisheries that guarantee growing populations is also an economic one for all of North Carolina and the nation. When fisheries are depleted, supply will not meet demand. When fish are able to reproduce before capture, fish stocks increase. Having more fish available benefits commercial and recreational fishing markets, as well as related tourism.

On June 20th, HB-483 passed the House with a 58-47 vote, but with some normally environment-friendly representatives voting against it. But why?  Some representatives argued on the floor, “if our fisheries are in such bad shape, why are recreational fisherman catching so many fish (regarding speckled trout and red drum)?” and “will this bill put commercial fishermen out of business?” According to the Coastal Conservation Association of North Carolina (CCA NC), these concerns are not accurate. Speckled trout and red drum fisheries are thriving because of strict management measures (similar to those being proposed by HB483) put in place by the NC Marine Fisheries Commission in 2011. The minimum size limit for speckled trout was raised from 12 inches to 14 inches, with the recreational harvest limit reduced from ten fish a day to four. These limitations give speckled trout the opportunity to spawn twice before they reach harvest size (CCA NC, 2019).

How I Got Involved with “Let Them Spawn”: How You Can, Too

My home is in Greensboro, North Carolina, a city located about four hours west of North Carolina’s coast. Until recently, I did not know a single detail about HB-483, or that North Carolina’s fisheries are depleting at a faster rate than fish can reproduce.  Earlier this year, my advisor at UNC-Greensboro (UNCG), Ms. Ann Somers, briefly introduced me to “Let ‘Em Spawn, Before They’re Gone.” Intrigued by the catchy name, I researched the bill and its relevance.  After digging in, I could not believe how ignorant I was about coastal fishing. I remember thinking, “I am studying political science and environmental/sustainability studies… how did I not know about this?”

So, I decided to ask my peers if they knew about HB-483. After some surveying at UNCG, it turns out most people did not know about the seriousness of overfishing or the debate over HB-483. I expressed both my interest and concern to my advisor who quickly recommended an event coming up at UNCG with guest speakers from the North Carolina Wildlife Federation (UNWF) regarding the importance of HB-483. I knew immediately I had to be a part of this campaign. I soon encouraged my peers to contact their representatives and start posting about HB-483 on their social media.

Wondering how else I could be involved, another classmate and I decided to contact our state representatives directly and have in-person meetings with them expressing our concern.  Soon our next step will be lobbying them about the importance of populous fish stocks and sustainable fishing methods. In the spring, UNCG administrators and I will be hosting an Ocean Advocacy workshop.  Its goal will be to educate students about HB-483, the harm of unsustainable fishing practices, and to provide them with the tools to be effective advocates on environmental issues. Advocacy through social media and lobbying can be powerful, giving many people the opportunity to be influential. At the end of my Rachel Carson Council Fellowship, I want to have informed as many peers as possible about the importance of environmental awareness, policy, marine life, and sustainability. The environmental challenges we face are great, but each of us can play a part in overcoming them.